The minister and the menace

A recent workshop on people's management of the Rajaji National Park brought out in full fury the debate whether the local communities are wiser managers of forests or the menace threatening them. While the environment and forests minister, RAJESH PILOT, released a message for the workshop, ANIL AGARWAL, director, Centre for Science and Environment, joins issue with him 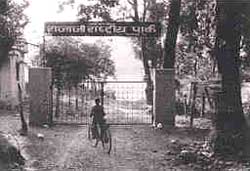 THEY can't do what th.ey want if the people of the forests retain their home rights. So, India's forest bureaucracy and t~ political mandarins insist that the 5,OOO-odd Van Gujjar's and their12,300 buffaloes must leave the Rajaji National Park ( RNP ) .The pristineness of the Park must be maintained, they insist.

Diabolic. But true. The Van Gujjars have been living in these forests since generations before the RNP came up. They have been recognised by ecologists as being protectors and preservers of forests. The buffaloes give them milk, which is sold along with ghee (clarified butter) to the towns close to the 825-sq krn. RNP. In the summer months they move to the high- er Himalayas in search of pastures, thus leaving the forest to rest and regenerate. But unless they are now removed from the forest, the formal notification regarding RNP cannot be issued.

On February 24 and 25, the Dehradun-based NGO, Rural Litigation and Entitlement Kendra, which has been espousing the cause of the Van Gujjars for a long time, organised a "Workshop on Community Forest Management of Protected Areas" in Dehradun. The purpose was to discuss and evaluate a proposal, prepared by the Van Gujjars; for the community management of RNP.

It is on this occasion that the Minister for environment and forests, Rajesh Pilot, chose to issue this message:

"Forests in India are situated over wide geographical regions, with human communities interspersed in between. We have , various laws, plans and programmes, but ina coun~ry like India, with a populationofmore than 900 million, 70 per cent of which live in rural areas and are dependent on forest biomass, it is difficult to preserve the forests on a longer time frame without their active participation. We have thus launched the system of Joint F,orest Management through public participation for its conservation and development.

"National parks and protected areas are the sites which are of rich biodiversity and genetic re~ources and constitute only one per cent of the geographical land of our country. It is utmost nec,essary for us as a nation to preserve this area from any further degradation and take all necessary measures for th~ protection of the species on the fringe of extinction.

"We do realise the sacrifice the communities have made over the years in allowing the national parks to flourish. We expect that the same spirit will be maintained in future also. We have launched the ecodevelopm~nt programme in the fringe of our protected areas to mitigate the hardship the local population faces due to rigid conservation measures enforced in the national parks.Un,der the ecodevelopment programme, we have got a list of activities which can take care of some such difficulties of the people. I, therefore, believe that in the management of protected areas, community involve. ment should come from the ecodevelopment package instead of the usufruct sharing, which are .prescribed for other forest areas. However, if forest : working becomes inevitable for' scientific habitat management to benefit wildlife, and some forest produce becomes available in the process, the benefit of such produce should first flow to the communities that live by the side of the forests.

"The Van Gujjars can playa great role in developing ~uch understanding with the forest managers to demonstrate that they are in a position to main- tain biodiversity through proper interaction with the forest department. I also call upon the m!ln- agers of forests, the local people; the environmen- talists, ecologists and specially the younger generation, to get involved in the process, so that the charge we have received from our ancestors is passed on to posterity for their enjoy- ment and benefit".