The need to be sure 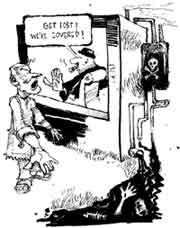 the Rio Earth summit is rapidly fading into our memories as an environmental event. The commitments made at Rio, the discussions of an Earth Charter in Rio +5 followed by the 19th United Nations General Assembly Special Session ( ungass ) for the overall review of the implementation of Agenda 21 have all tried to ensure the environmental concerns do not fall off the national and international agenda.

The Rio summit and subsequent meetings of the un Commission for Sustainable Development ( csd ) put a price tag of around us $130 billion per year in additional resources needed for implementing Agenda 21. It is now clear that the significant amount of additional resources needed will not be forthcoming. Aid flows are declining, and have reached their lowest level ever recorded at 0.25 percent of the gross national income of the donor countries in comparison to the target of 0.7 per cent.

It is now being argued that the private sector, funds from which are only reaching a handful of developing countries, are more significant. There is an increasing trend towards market-based solutions. Unfortunately, it has been acutely realised that without effective regulations, the market may not factor in the cost of environmental damage. At the same time, as the economies of the world move towards market oriented paradigms, reliance may have to be placed on market solutions.

Markets have a short-time horizon. To make markets more responsive to environmental concerns, one suggestion is to provide them with more and better information on the environmental impacts of the actions of firms so that this can be built into the valuation of companies. Unfortunately, this will not be sufficient as the markets will discount information depending on the effect on the bottom line of the companies. Often, companies look only towards the current year's balance sheet. If the cost of environmental protection is too high, it is not factored into the production processes or the type of goods produced. And the incentives and penalties for action are insufficient. Moreover, a number of polluting commodities, such as gasoline, have demand curves that are not elastic, which means that consumption will not decline significantly even if prices increase. Various other innovative financing mechanisms, such as tradable carbon dioxide emission permits, have been presented in international fora to control the amount of pollution by countries.

Most markets, such as product, labour and capital, are poor when it comes to inter-generational allocation of resources over time, with due regard to environmental concerns. However, insurance and futures markets provide a mechanism for taking the future into account. There is a need to think of using the insurance market as a vehicle for environmental protection. The idea of using insurance markets is not new, as many companies take out liability and environmental insurance against major disasters. The United Nations Environment Programme ( unep ) has also brought together a number of large insurance companies to focus on the environment. Insurance companies have realised that they need to take account of the environment more comprehensively as they may face huge liabilities. But we need to be more innovative on how to use insurance for the protection of the environment.

What is being proposed, therefore, is to require all businesses to take out compulsory environmental insurance and provide the civil society the rights to claim against business that pollute. As businesses can go bust, the right to claim would also have to be against the insurance companies. However, if the polluting business fails, then the pollution it produces will also cease, hence the insurance market will provide the deterrence and discourage others from polluting.

Standards will have to be set and enforced through the courts. But the policing of the environment will be up to the insurance companies and the civil society. They will have to enforce and discount the environment much as they do for their life and automobiles. They will have to send out their inspectors to ensure enforcement. And they will set the premiums depending on how much of a risk they feel a business will be to them. Environmental standards would, however, have to be set at the micro level by governments based on agreed global standards. Agreeing on this is probably the most difficult issue apart from a political will to act and the possible hue and cry from business lobbies. Also, to ensure a level-playing field, all businesses would have to be included within and across countries.


There are two problems with insurance, First is that of moral hazard; the polluting companies will have a greater incentive to take out insurance and then go about polluting as much as they like until sanctioned. Second is adverse selection; insurance companies will not want to take on businesses that are clearly a great risk and only insure those that are safe bets. To counter this, it should be made mandatory for all businesses to take out blanket and specific environmental insurance - just as in the case of auto insurance, it is mandatory to take out insurance even though you may never meet with an accident or be responsible for it.

It will also be necessary to give the civil society the right to make claims - not just the people who are affected directly by the environmental damage. This would take care of situations in which those who are directly affected cannot fight against the polluters. For example, a worker in a paper mill that is polluting a river, who lives along the river and is affected by the pollution, may not have an incentive to sue for damages since his job depends on the company. However, the actions of the company may be polluting the global commons. For this reason, the right to claim has to be made universal.

What are the implications? Firstly, companies will build the cost of insurance into the products they produce. It is likely that they will continue to sell unless there is litigation against them. Consequently, this solution will also allow pollution to go on until such time as there is a successful claim against the company - and the penalty may have to be significant or there can be a number of plaintiffs before a company will change its ways. In any event, the insurance company will be responsible to monitor and to reduce its liability. It may well err on the side of caution, but this will depend on the competition that is generated in the insurance market.

Secondly, the stock market will want to examine the company and the products its produces more closely while valuing it. As the environmental costs can be significant, the market will try to build it into the stock price more appropriately. In fact, investors in insurance companies may be expected to distinguish between the prudent and not so prudent companies based on how well they enforce environmental standards.

Thirdly, if the prices of polluting products can be increased significantly, a number of non-polluting raw materials, products and production processes may find a more ready market. This would work in favour of the primary commodity-production countries, who may well see a higher demand for their products and a higher price.

For another, making all businesses liable for the environmental damage - regardless of where the responsibility lies, in their products or the inputs they use - will amplify the attention to environmental problems. This can also go across orders. Therefore, importers can be held liable for violating any global or national environmental standards in the production of their imports. If such global agreements can be reached (no easy task, given existing agreements in international fora on trade and environment), then there will be an incentive across countries to move towards higher environmental standards, rather than minimum standards. A lot of course depends on developing, agreeing and implementing environmental standards and adequate penalties which go beyond standard liability insurance, as in the case of oil spills or toxic gas leakages such as in the 1984 Bhopal gas disaster.


It has to be kept in mind that insurance markets in developing countries are generally underdeveloped. Promoting such markets will be a major task in the initial stages. But actions can start in many of the developed countries that are responsible for much of the environmental damage, such as emissions of carbon dioxide.

How can one see this working? Consider carbon dioxide emissions by cars. If national quotas can be agreed upon, then there will have to be controls on, say the number of kilometres a car can be driven annually, and possibly also on the total number of cars that can be on the road. Say one can drive only 10,000 kms a year. If you drive more, your environmental insurance premium would jump.The insurance company can be required to collect the higher premium and deposit part of it into an environmental protection fund with the government. In effect, a tax would be collected, the more you drive, until it is prohibitively expensive to use one's car beyond the agreed limit. But this tax would be selective, unlike a uniform tax on gasoline. It will not be difficult to enforce. Already, insurance companies keep track of the number of kms driven by their clients to give them reduced premiums for low mileage and higher premiums can be instituted for vehicles that pollute more than the norms. If insurance companies fail to enforce the standards, they would be liable. Individuals would need to be more selective in their use of personal vehicles, ensuing a greater demand for public transport.

It can be left to the ingenuity of insurance companies to come up with monitoring mechanisms. For other types of pollution, such as air or water, enforcement will be easier with companies required to carry compulsory environmental insurance.

What is being proposed is an alternative mechanisms for financing the cost of environmental protection before the damage occurs. Policymakers should focus on this aspect rather than rely only on the "polluter must pay" principle. The cost of environmental protection must be built into the prices of the goods produced in order to influence production and consumption patterns. The problem has always been how to do this. The insurance market provides one way of letting the markets police themselves but within defined and agreed environmental standards, and with regulation and enforcement by the market, civil society and the courts. With the El Nio effect likely to cause unpredictable damage this year, people rushing for insurance cover and the constant reminders of the impending environmental damage, the costs of environmental protection have to be built through the market in order to alter a wide range of production and consumption patterns.

Of course, in the end it is not the ingenuity of using the insurance market for environmental protection but the political will - both national and international - to agree and enforce standards and overcome the strong business opposition that will be the main determinant of success. But businesses learn fast and many well be induced to adopt more environmental-friendly technologies and products.