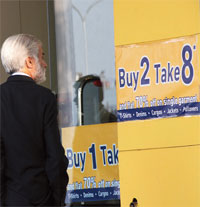 If India is a growing economic power why is it so eager to put the interests of foreign businesses first?

All governments need to be watched. You never know when one of them will slip in a nasty tax on the quiet or pass a seemingly simple notification that can be the undoing of entire communities or of the environment. That is the nature of the beast. But how vigilant can people be with a government that will try to alter the entire complexion of a critical law-in-the-making by sneakily replacing a clear-cut ‘or’ with a lethal ‘and’—under the very noses of the MPs opposed to legislation?

That small alteration would have been a huge gift to the handful of foreign companies that are poised to supply nuclear reactors and equipment to India—the Arevas, the Westinghouses, the Toshibas, the GEs and the Atomstroyexports who control the global business. These companies would have been neatly let off the liability hook in the event of a nuclear accident had it not been for two Left MPs who spotted the subterfuge. Few governments have been as brazen in the defence of foreign commercial interests as the UPA government of Manmohan Singh. That it should go to such lengths to protect suppliers in the Civil Liability for Nuclear Damage Bill 2010 is all of a piece with its readiness to put the interests of foreign businesses before that of its own people and, at times, of domestic enterprises, too.

Yet, it shocks even the most cynical of cynics. Has India well and truly turned into a banana republic? The chicanery in Parliament was exposed just as Planning Commission deputy chairman Montek Singh Ahluwalia was being hauled over coals by the media for emails he exchanged with US deputy national security adviser Froman Michael about enhancing India’s borrowing limits from the World Bank. In response, Froman had written that “we are hearing a lot of noise about the Dow Chemical issues… I think we want to avoid development which put a chilling effect on our investment relationship.”

The issue here is not whether India did anything about the ‘noise’ but that Ahluwalia thought fit to raise the issue of a quid pro quo in his correspondence with India’s representative at the World Bank. What is most embarrassing in all this is the far from flattering regard in which the US holds its new ally.

Terms like banana republic tend to be used loosely and far too readily by the anti-corporate brigade which suffers from a variation of the Reds-underthe- bed syndrome of American society. Indeed, a vast number of Indian civil society organisations and grassroots activists suffer from a pathological dislike of multinational corporations that tends to cloud their thinking. But it is also an aversion that has been deepened by the perception that this government is cosy in bed with the MNCs—a view that took root when Manmohan Singh and George Bush announced the US-India Knowledge Initiative in 2005. That agreement was ostensibly aimed at ushering in a second Green Revolution in India, but what it brought into the frame was the overwhelming presence of American corporations: giant traders, seed companies and retailers. The ultimate goal, critics of the initiative have warned us, is to spread farm biotechnology and tighten the grip of intellectual property rights over Indian agriculture.

Several other factors have deepened this perception. Apart from the notorious corporate ghosts of the Bhopal gas leak that are still haunting the Congress party, there is a growing conviction that critical laws—on seeds, biotechnology, nuclear power, pharmaceuticals, among others—are being formulated in such a way as to allow a handful of foreign companies to have free run in these sectors. The main source of concern are the Seeds Bill, the Biotechnology Regulatory Authority of India (BRAI) Bill coupled with the fears that domestic laws covering pharmaceuticals, agrochemical and biotech sectors will be watered down to benefit MNCs in the free trade agreements under negotiation with India’s major trading partners. So let’s come back to the central question: is India a banana republic? The original definition referred to small countries in Central America whose economies were dependent on a single export commodity—bana nas, of course, and sugar—and were governed by dictatorships servile to exploitative foreign companies.

Over time the term has come to be used for any country that is under the economic control of foreign-owned companies or industries. The Encyclopedia of Business says, “Its usage has also expanded over the decades to even refer to the control of part of a country’s bureaucracy by an opposing bureaucracy of the same country.”

Can a country that has an impressive export portfolio (from software services to automobiles) and is a potential economic superpower be referred to so derogatively? Welcome to the new banana republic where so much has changed and yet much remains the same.