The panacea in a lake 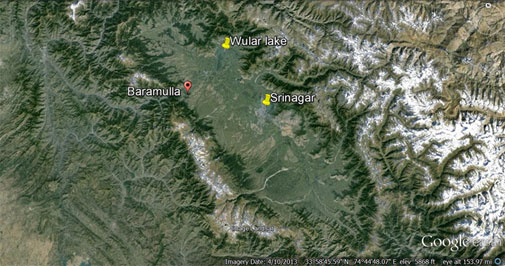 Recent floods in Jammu and Kashmir that have brought focus on the valley and the state’s capital city of Srinagar, deserve a peep into region’s mythology, history and geography as well as recourse to newer methods and tools of planning to seek sustainable solutions to a situation which though not unprecedented - since floods not much different from 2014 had visited the valley in 1902 and 1950s as well - has nevertheless brought widespread human misery and loss of life and property. It is reported that even in 1902 most of Srinagar had remained inundated for almost 2 years and there were widespread losses.

The etymology of Kashmir is traced to mythological Rishi Kashyap (also called as Kashapa), a manasputra of Lord Brahma the creator of the universe. It is claimed that it was rishi Kashyap who first drained the valley, till then a huge lake, called the Satisaras (after Sati, the consort of Lord Shiva). It was carried out by opening a gap in the hills at a place called Varahmula.

Amazingly, a bird’s eye view, courtesy Google Earth, of the Kashmir valley matches its ground reality perfectly with its mythology. Clearly the valley, with river Jhelum as its principal drainage seems a vast lake of sea proportions. Not unlike the mythological narration it drains out even today through a gorge near Baramulla, the Varahmula of mythological times. Its sea like waves are believed to have given the lake its name Wullar or Wular after the Sanskrit word Ullola (rising wave).

So much about mythology. Coming to the present, Wular Lake would perhaps be unique in that it embraces a river (Jhelum) to little later give birth to the same in perhaps a reincarnated form. Clearly the health of the valley as a system has a lot to do with the health of its presiding lake, namely the Wular. So while it is the Dal Lake that hogs all the limelight when it comes to Srinagar or the valley, it is actually the Wular Lake that should be the matter of greatest concern if any sustainable planning for the valley is to be done.

According to a 2007 action plan for Wular Lake, prepared by the Wetlands International, south Asia, the area of the lake in 1911 was 217 sq km which by 2007 had reduced to 86 sq km, with most area having been lost to agriculture (28%) and plantation (17%). In addition some associated marshes, which extended to some 58 sq km, had reduced by 70% due to agriculture and habitations. Resultantly the role of Wular Lake to regulate flows in river Jhelum has drastically reduced.

Tracing a contour line of 5200 - 5250 ft on a topographic map of the valley provides a peep into few interesting aspects of the valley. One it defines by and large the original extent of the Wular Lake which incidentally would have also included parts of the city of Srinagar on either bank of river Jhelum. This corroborates reports that at some point in the past what is now the city of Srinagar was a marshy tract with river Jhelum starting its deltaic phase there from before losing itself into the vast expanse of what then would have been truly a sea called Wular. This fact is also proved by hardly a drop between the bed altitude of river Jhelum in Srinagar at around 5250 ft and the extreme point of Wular at 5190 ft. So over some 40 km as crow flies, it is almost a flat terrain.

Clearly flood waters when they come can only spread laterally over the spread (flood plains) of the Wular as there is little depth to fill in the lake itself. And if the lateral flow is obstructed physically (in form of farmlands, human habitation and plantations) then there can be nothing but back flow, breach in embankments and devastation as has been witnessed in Srinagar and other parts of the valley.

The lessons are clear.

Treat and re-imagine Srinagar physically placing it within its larger geographical context as a marsh on the edge of a vast lake with a river running through. Delineate the flood zones of the river as well as that of the several lakes dotting the environs of Srinagar and identify all low lying sites in the city. Wherever original wetlands and flood plains can be restored do it on a priority and where not, retro-fit all existing structures to become flood resilient.

GIS technology aided by satellite imageries should be used to re-establish in planning and in popular and academic discourse, Wular ‘sea’ as the valley’s life support and former’s ecological restoration as part of the strategy to reduce harm from any future flood in river Jhelum. For, in light of the uncertainties associated with the phenomenon of climate change it may not be another 60 years before the next big flood in the valley reappeared.