The Pellipadugu Declaration on Food Sovereignty

Adivasi, dalit, pastoralist and peasant communities declare food security can only be met through Food Sovereignty

Adivasi, dalit, pastoralist and peasant communities declare food security can only be met through Food Sovereignty

We met as we do each year between the 28th and 30th of December 2013, at the Food Sovereignty Summit, which this year saw over 300 adivasi, dalit, pastoralist and peasant communities from Telangana and Andhra Pradesh, gather at the Pellipadugu Kalwa (stream) that flows through the warm and welcoming hills surrounding D.Bhimavaram and Nookarai villages. This year there were a lot of young people, students and city folks who came, out of deep concern about our collective future of food. For 3 days it was a colourful yet extremely political celebration of our movements for food sovereignty: we sang, we ate the different diverse foods that we had grown in our villages which were brought and shared, we discussed, we had heated debates: from the food security bill to  the “Peace Clause” at Bali, to chalking out concrete steps to shift from commodity monocultures to growing food; the dialogue session on Youth and Food Sovereignty was perhaps the most packed and animated.

30th December: we remembered K.G. Kannabiran, civil rights activist and lawyer, who had walked this road, and gave us political spirit to move on. The silence of the forest was broken by the tweeting birds and insects who gave thanks: “Johar Kannabiran”;  The declaration of the Food Sovereignty Summit was read out and collectively passed. New energy in the air with the announcement of the formation of the Food Sovereignty Alliance. ….. A new seed sown.

On 2nd January sitting in Venkatlaxmi’s village, where the women of the Tholakari Mahila Gotti, were putting into place final details of the launch of their Local Market for Aseel Poultry, we read an obituary in the newspaper, of the passing of G.Nammalvar– or Aiyya to all of us, on 30th December 2013. Nammalvar- he was with us at the very first gathering in 2008 where we discussed the Crises in Agriculture. That day he spent an entire afternoon with the children of Centre for Learning, Secunderabad – Rahmat, Mrinalini, Sruti, Nuvruti, Nikshit, ,..  telling them about the crop – the top part for people to eat, the mid portion for the animals to eat, and the bottom part for the soil to remain healthy. The children inspired, presented him with a painting, which he re-gifted to the community. In 2007 and 2008,  Nammalvar shared his wisdom and visited the Gond and Kollam adivasis in Adilabad, the Konda Reddy and Koya adivasis in East Godavari,  shepherds and small farmers in Nalgonda and Medak. That same year, over 20 Dalit farmers from KVB Puram and Medak visited Nammalvar’s farm in Sathyamangala, Erode.  In 2009 he was with Radha and the children of Rishi Valley School.

Unbelievably, pretty much every sangham and community gathered at this 4th Food Sovereignty Summit, had interacted with Nammalvar at some point in their journeys. We would like to believe that as we read out the Food Sovereignty Declaration on 30th December 2013, the collective spirit of a newly formed alliance, accompanied the great man in his last journey, and in turn a little bit of him continues to be strongly embedded in the alliance, and in each of us, guiding us in our commitment to this shared vision of Food Sovereignty:

The Pellipadugu[1] Declaration on Food Sovereignty

We the adivasi, dalit, pastoralist, peasant, scientist and student communities have gathered here from Telangana and Andhra Pradesh, between 28th and 30th December 2013, in D. Bhimavaram village of the adivasi territories, with the collective concern to defend our sovereign right to food and the rights of mother earth.

We deliberated on the fundamental questions that concern our food: the plunder of our resources; the threats to seed sovereignty; the health of our soils; the commodification of our biodiversity, knowledge and cultures; and the destruction of our local markets by the Global Corporate industrial food complex.

For us, food is the abundance of life that mother earth provides: the diversity of grains, pulses, oil seeds, tubers, fruits, vegetables, animals, insects, fish; and the associated food cultures celebrated in our various communities. Ownership and control of land is central to our struggle for food. Markets are networks of relationships to protect, sustain and nurture our food through local reciprocal systems of exchange. They are not spaces to extract profit.

Women are leaders in the Food Sovereignty Movement. It is women who are at the frontlines of struggles for Food justice; and challenging patriarchy is an integral part of restoring Food Sovereignty.

We reaffirm the power in our peasant food webs to feed ourselves and to resist the corporate capture of our lives.

We declare that our lands, forests, water, air, diversity, seeds, knowledge and cultures are not for sale. We will resist the monetization of our lives and resources.

We assert that food security can only be met through Food Sovereignty.

We call upon the State with the following demands:

We demand that the State implement without further delay, the recognition of individual rights and community forest rights according to customary boundaries of adivasi and other traditional forest dweller communities.

We demand that the State uphold the supreme powers of the gram sabha under the Panchayat Raj (Extension to Scheduled Areas) Act, 1996 and the Forest Rights Act, 2006.

We demand that the State commit its resources to our autonomous local systems of production, procurement and distribution to ensure food security.

We condemn the State-Corporate nexus that has decimated our farming systems: including seeds, agronomic practices, dairy, poultry and fisheries.

We further condemn the State’s continued aggressive promotion of national and multinational Corporates to take over the last bastions of autonomous farming: adivasi food cultures and pastoralist livelihoods.

We condemn the decision of Government of India  to ratify the “Peace Clause” at the Bali round of the WTO negotiations, that trades away our sovereign right to define our food systems.

We call for a moratorium on all  ‘Free Trade Agreements’ that destroy our lives and livelihoods.

We oppose the entry of Foreign Direct Investment (FDI) in Food and Retail.

We strongly condemn State efforts to promote genetically modified crops and call for a moratorium on all field trials in accordance with the recommendations of the Technical Expert Committee on GMOs,  appointed by the Supreme Court of India.

We oppose the global patent regime that privatises and commodifies our knowledge and biodiversity.

We denounce the false market solutions to climate change, and declare that Food Sovereignty is the only way to build resilience and in fact combat the Global Food Industrial System as a primary driver of climate change.

We call for the roll back of destructive State programs such as INSIMP, which in the name of promoting millets, threatens local biodiverse and autonomous agro-ecosystems.

We demand a halt to all monoculture plantations in our fields and forests.

We commit to the following actions:

We shall continue to defend our rights over our lands, forests, water and air.

We commit to deepening our relationships and traditions of reciprocity and collectivism as a means of solidarity with one another. This solidarity is the basis to resist the violence of the corporate food industry.

We shall build power through democratic local systems of governance to further food sovereignty.

We will use the power of our vote to raise Food Sovereignty as a political issue.

We shall shift from growing commodity monocultures to cultivating diverse food crops, through ecological and organic farming practices.

We shall save and exchange our seeds and thereby resist the corporate seed markets.

There is an interdependency between animals, crops, forests, water and other resources of the commons that has been broken by the industrialization of our food systems. We shall restore these broken links by rebuilding our indigenous animal resources, which in turn nourish and are nourished by these commons.

We shall reestablish local markets as a means to exchange our produce with one another, and to feed and support local communities.

We celebrate the spirit and commitment of young people in the food sovereignty movement.

We shall conscientiously nurture intergenerational spaces within our movements for sharing knowledge and practices for the future.

We hereby come together as a Food Sovereignty alliance between our movements, which shall advance this shared vision.

[1] The Pellipadagu stream is the lifeline of 12 adivasi villages nestled along its banks. This historic venue of the Food Sovereignty Summit is the site of struggle by adivasi peoples of D. Bhimavaram, Nookarai, Mallavarammamidlu, Mammidipalam, Nimmalapalam, Veerampalam  and Kovalapalam villages under the leadership of Girijana Deepika and Adivasi Aikya Vedika, to prevent the granite mining of rocks surrounding their sacred river. In 2010, the adivasi village councils passed resolutions rejecting the granite mine. 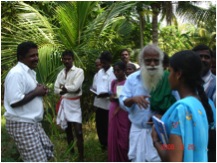 Nammalvar with farmers in Nalgonda, Sept 2007