Agriculturists in India are gradually moving away from chemical pesticides and fertilisers; 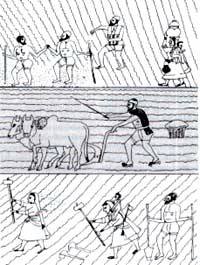 THE deadly DDT was banned for agricultural use in India in 1992, when it was found that the daily diet of Indians contained 0.27 milli grams (mg) of this pesticide. Recently, India saw the banning of Benzene Hexachloride (BHC), a pesticide which causes turnours, leukemia, liver and kidney damage and cancer, and damages the nervous system. Studies on BHC contamination in India have found residues of the chemical in foodgrains, oilseeds, pulses, vegetables, meat and poultry as well as in breast milk and in the blood in the umbilical cord.

The green revolution has proved to be a bane in disguise. Hybrid seeds and the use of chemical fertilisers and pesticides increased agricultural productivity initially, but then a plethora of problems cropped up. Fertilisers over the years not only reduced the average farm yield but also made the crops more susceptible to pests and diseases. And inspite of more input of fertilisers, the ield started falling.

Now, agricultural scientists and planners are fast realising that the harm wrought by pesticides far outweighs their benefits and the silent switch over from chemical pesticides to bio-cides has begun. The environmental hazards associated with effluents and chemical residues in crops and agricultural run off is alarming. About three lakh Indian farmers lose their lives due to pesticide poisoning. The Bhopal gas tragedy, in which there was an accidental release of toxic gas from a pesticide manufacturing plant, is also fresh in our mind. It is shocking that since independence, India has dumped more than 1 million tonnes Of DDT and BHC on arable land.

Pests damage farm produce worth Rs 6,000 crore a year, ranging between 10 and 20 per cent of what is produced yearly. Indications reveal that the demand for pesticides in India is going to rise from 80,000 tonnes to 1,44,000 tonnes annually by the turn of the century. Even such heavy application of pesticides will not increase agricultural productivity appreciably. In fact, by AD 2000, the amount of agricultural produce consumed by humans is expected to go down in India. The challenge is to increase the yield without damaging the land or human health and, at the same time, maintaining the ecological balance. Most agricultural scientists are emphatic that the solution lies in a 'back to basics' approach - that is, Integrated Pest Management (ipm) - which involves the use of economically and ecologically sound pest-control techniques, like biological control of pests, use of natural pesticides and organic farming without the use of chemical insect killers.

Meanwhile, apart from banning BHc and DDT, the government has also announced a country-wide scheme under which the entire agricultural land will be covered for soil-testing to see the via- bility of alternative methods of pest control and for boosting productivity of food-grains. Private entrepreneurs are being encouraged to adopt eco-friendly ipm techniques.

A wide range of plant- derived insecticides are being developed in India. In Guntur, Andhra Pradesh, farmers are intercropping cotton with crops such as soy bean, red gram and cowpea, which repel bugs. Powdered chrysanthamurn (Pyrethrum) is widely being used in various parts of the country as an insecticide. Nicotine extracted from tobacco and garlic oil are also proving to be effective pest-control agents. Heringer Brights Research Institute, Pune, has prepared 'Indiara', a safe herbal insecticide from garlic, onion and mustard which is effective against pests of more than 50 crop-varieties. Recently, two NGOS, Prakruti and the Mumbai Gandhi Smarak Nidhi, had organised a public meeting on cultivation and consumption of organic food. The Bawalker Earthworm Research Institute is propogating vermiculture for sustainable agriculture. The list is endless.

From neem-based pesticides to tomato seeds, from fish to enzymes, biotechnology is allowing the corporate sector to reap rich harvests. By AD 2000, the value of biotechnology products will be around Rs 3,500 crore. But the process of the silent switch over is bound to be gradual.

All this substantiates one fact - natural methods are increasingly being recognised as the most healthy solution to the pesticide problem. It is possible to have'clean' pest control by using biocides. And new methods of agriculture prove that sustainability and food security can go hand in hand.

Tirtho Baner ee is a journalist based in Lucknow