Time for Green from the ground up

The show is over. It's time to stop talking and get down to work 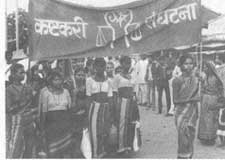 THE RIO Earth Summit was probably the biggest media event of any UN conference in history, much more so than the last big bash -- the women's conference at Nairobi. Women are only women, after all, but the earth is the mother of us all. Something like the fear of Orissa peasants and tribals that in the reckless mining of the Gandharmardan hills "we are drinking our mother's blood" has permeated every country in the world. It was this worldwide consciousness of impending catastrophe, backed by localised struggles of victims of concrete destruction and aided by scientific evidence that the potential for disaster exists, which produced the United Nations Conference on Environment and Development.

But who could realistically expect much from such a gathering? Who, after all, were the principal actors debating at Rio? On the one hand, the governments of the North, representing the nations and races who have been responsible for destroying the planet in the last 500 years and symbolised by the stonewalling of the US President. On the other hand, the governments of the South, representing the non-white elites who have been fighting for the right to pollute.

The South fragmented by regional interests, could unite only to insist that "ecology" be linked to "development" and demand money and technology to do this.

We know what "ecology" means to people like Bush. What "development" has meant up to now to southern elites is equally clear: prestigious irrigation projects, fertiliser factories, steel plants, nuclear power and bombs that has ravaged the world. There is no reason to believe that this notion of development has changed.

Finally, the third set of actors at Rio: the employees and contractors of those unique "multinationals" dealing with environment and development, the NGOs, claiming to represent the peoples' movements of the world. The people of the movements, especially those in the South, were hardly to be seen: who after all could afford to go to Rio? The NGOs have undoubtedly been sincere in trying to speak for the movements. But it was clear that the governments of both the North and the South had recognised their political impotence and were not ready to give them even a glance. It is no wonder that the "alternative" Global Forum seems to have been dominated by the beachboys of the North and the Ananda Margis of the South.

Most southern environmentalists have found themselves in an ambivalent position regarding the Rio conference. They have, by and large, fallen in line with the demands and rhetoric of their governments because, in the words of one, "The NGOs are weak; only state power can protect us from the onslaught of western 'globalisation'." This has resulted in bizarre situations. For instance, Mahathir Mohamed, known for his willingness to destroy the Malaysian forests, has become a hero of resistance to western domination.

Southern states have never protected their people from the onslaught of multinationals or any other agent of destructive development. Tactics is one thing. But a long-term strategy is a different matter.

The show is over. It is time to stop talking and get down to work; time to practice the protection of biodiversity; time to do sustainable production in agriculture or any field; time to organise a consumer movement for sustainable and healthy products that does more than just tail after a Birla-Ambani "swadeshi"; time to work out a genuine analysis that gets beyond reporting the cliches of a static socialism or self-interested nationalism; time to get out of the golden cage of NGO funding and help build peoples' movements. Time to forge an alternative political platform that can bring together the disparate movements beyond the clutches of the discredited opposition parties; and, time for Green from the ground up.

---Gail Omvedt is a well-known Maharashtra-based academic and political activist.