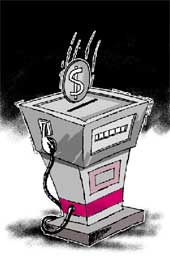 can it really be that petrol is now over us $0.40 per litre, when it was less than us $ 0.26 just a year ago? The anguished howls of drivers can be heard at every gas station. Truck drivers and airlines add surcharges to cover the unexpected rise in price, and truckers run protest caravans of big trucks to Washington dc .

The public blames everyone in sight -- Organisation of Petroleum Exporting Countries ( opec) , oil companies, and unnamed conspiracies -- for the sudden surge in the price of oil and its products. Yet the real cause of this oil price rise is so close at hand as to be invisible. To paraphrase, "We have met the problem, and it is us!"

Americans use nearly one quarter of the world's oil, and as the us economy has soared, it has increased its rate of consumption rapidly.The low prices of last year were the direct result of lower demand from weakened Asian economies. But as they have begun to return to health, then demand too has added to the global prices. Few realise that this happens, in part, because the us has for several years been importing over half of the oil consumed.

Last year, us purchased a record 17 million vehicles. If aggregated, these vehicles have the lowest fuel efficiency in nearly 20 years.

Last week at a local store, not a single refrigerator had an energy use label on the outside. One salesman told me I was the first person in a year to even ask about energy use. But we did find some labels inside, and all showed these refrigerators to be the least energy efficient in their size class.

We seem to have forgotten that the world of cheap energy running these inefficient machines will not necessarily last forever. For a nation that constantly inflicts "free market" solutions on the rest of the planet, the citizens of us seem to have only a vague sense of how the market for energy works and their role in it. opec is free to sell its oil at whatever price the market will bear, just as are producers in Texas and Alaska. But when oil prices rise, the us mounts diplomatic missions to ask foreign producers to sell to it at below market prices, but never does the same with its own domestic oil companies, who also get us $30 per barrel for their oil.

This kind of market intervention is seldom a good idea, and applied selectively, worse. There is even less awareness of the opportunities we squander every day or the environmental, economic and political consequences for the generations to come. It is not just the price of oil we drive up by our wasteful consumption. It also ends up generating more air pollution and oil spills and add to global warming. Half of the carbon dioxide released today from burning fossil fuels will still be in the atmosphere at the turn of the next century.

If the us secretary of state, Richardson's diplomacy with the oil producing nations fails, does us really want to contemplate sending more young people into military combat where they may end up dodging bullets and still come back with the Gulf War syndrome?

Residents of us should stop whining about rising oil prices and instead take a reality check.

Americans still pay less than half of what Europeans and Japanese motorists pay every day for petrol. The habit of burning dollars through subsidies to let poor people buy high priced oil must come to an end. Let those who can afford it, replace that old furnace or boiler with a new, efficient, one. If possible, shift from oil to gas and think of purchasing clean, green electricity. Finally, consider driving just a little bit less each week. If all the people were to car-pool to work or take public transportation one day each week, the community could take the edge off of the higher market prices. The savings would be considerable.

As anyone who understands markets knows, the best way to lower prices is to lower demand. This is far more effective than empty gestures. If we lower the price ourselves by using less oil, we create a cleaner environment, a stronger economy, and a more secure future. That beats whining any day.

The author teaches at the Fletcher School of Law and Diplomacy at Tufts University in USA.