Time to sit up

A green clean or the polluted nether worlds? The choice must be made soon. May be global 'redistribution of opportunities' in the countries of the South can help set the scene right for a green crusade 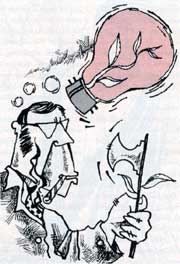 in the Netherlands, a population of 16 million people have to live together on a very limited geographical space. The standard of living of this teeming millions is exceptionally high, and all of them share a common passion for mobility for the sake of global competition through the international division of labour. As a result, the Netherlands have specialised mainly in those sectors that have turned out to be more-than- average polluters: bulk chemicals, mechanised agriculture, road transport and so on and so forth.

Therefore, ironically in our country, a direct link exists between our well-guarded material abundance and burgeoning environmental degradation which is a ca-use for alarm. In most developing countries on the other hand, one can see that it is poverty that is a root cause for alarm. And poverty is, of course, coupled with exhaustion of primary products and land, and extinction of species. The felling of trees, pollution of rivers and the uncontrolled disposal of wastes, all these are not only symptoms but also causes of poverty.

With the roots of environmental degradation being so much different in the North and the South, the question that one can ask is, if Northern knowledge, technology and opinion (which I have been asked to share with readers of this magazine on a more or less regular basis) is useful for people who live in the South. The answer is definitely positive. But this is true only if certain conditions are met.

In the first case, a gratuitous export' of ideas, policy recommendations and technological achievements are all not very helpful. It would be helpful if modern technologies which are heavily protected through intellectual property rights, would be available much more easily for Southern entrepreneurs. A point to be noted is that all this technology is nestled in the hands of Western companies.

And it would indeed be a wrong signal if for negotiations, this noose of protection is only tightened further. But still, I would not recommend the export of Western knowledge and technology as the exclusive answer to the environmental problems that the South continues to face.

There is something else which is more important. If we consider the world to be a global village (and who would not these days?), and if we acknowledge the coexistence of -poverty (mainly in the South) and abundance (mainly in the North) to be at the heart of the deterioration of our environment, then at the end of everything only redistribution of opportunities can be the answer to the problem.

During the United Nations Conference on Economic development (UNCED) in 1992, which was held in Rio de Janeiro, developing and developed countries together tried to negotiate a global deal aiming at such redistribution: developing countries would take measures to curb pollution and exhaustion of natural resources in exchange for Western support in their fight against poverty, through methods like development aid, reduction of debt and liberalisation of trade.

Since UNCED, undoubtedly, the environment of the world has gained prominen0p on policy agendas of the North as well as the South. But in the end, when ecology and economy have to fight it out for 'who comes first', all too often it is economy that wins hands down. 'This is why today we risk the danger of building up frustration among all those global citizens who were once motivated to explore the potential of a global deal that was put down on the agenda Of UNCED.

Export of environmental knowledge and technology alone will not be enough to prevent this frustration, almost four years after UNCED and other topics dominating the international negotiating agenda. The sense of urgency that one could perceive in the Rio proceedings has disappeared, although the environmental problems plaguing different regions of the world have not yet been solved.

However, shortly, the international community is set to undertake its first effort to evaluate the implementation of the commitments adopted at Rio. For NGOS, governments of nations all over the world and international organisations alike, this is a compelling opportunity to show that their lobbying for ecological awareness was not only a temporary whim, but is a lasting commitment till the necessary results are achieved.

Max van den Berg is the director general of NOVIB, The Netherlands