At 0530 hrs IST on October 9, the centre of Hudhud was 780 km south-southeast of Gopalpur, Odisha, and about 770 km southeast of Vizag, Andhra Pradesh. It has been moving in a west-northwest direction with a velocity of around 10-12 km/hr. The  India Meteorological Department states Hudhud had maximum surface winds of 80-90 km/hr (averaged over 3 minutes) in the morning, while the  Joint Typhoon Warning Centre states that maximum winds were around 100 km/hr (averaged over 1 minute) with a pressure of around 982 mb at the core according to US Naval Research Laboratory.

Satellite images show features of intensification. The “eye” of the system and the surrounding “eye wall" are now visible in special satellite images. 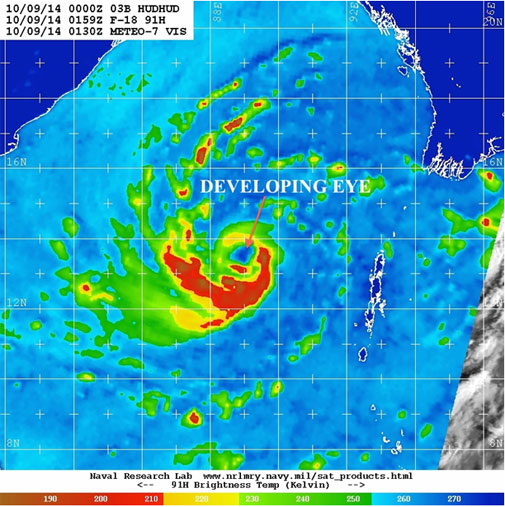 Hudhud is now entering a warmer patch of Bay of Bengal with a sea surface temperature of 30°C. An anticyclone (high pressure region) is also seen establishing to the north of Hudhud. This anticyclone will allow more outflow of the warm, moist air (which is entering Hudhud from its base and then, rising above, producing clouds). Such strong outflows of air are just like the air we exhale. A strong inhale-exhale system is a must for such cyclones, without which they die out.

Forecasting the intensity of Hudhud

Hudhud is expected to be a big threat to coastal areas of Andhra Pradesh and Odisha from October 11. While IMD expects maximum sustained surface winds of 130-140 km/hr from October 10, agencies like JTWC estimate that Hudhud will hit the category 4 status just before landfall between October 11 and 12.

I expect it to intensify to at least a category 3 cyclone (with maximum winds around 178-208 km/hr). It must, however, be closely monitored for possible rapid intensification like in the case of Phailin in 2013.

Nevertheless, one cannot deny the threat to these coastal areas and people must remain alert and follow all stated precautions. Post-landfall, heavy rains will be witnessed in interior Andhra Pradesh, Telangana, all of Odisha, Chattisgarh, eastern parts of Maharashtra and Madhya Pradesh.

Where Hudhud will strike is anybody’s guess right now. We will be able to make a clearer estimate by the evening of October 9.