Truth is what my father taught me

A look at today's environmental issues through the eyes of two well-known poets, exclusive to Down To Earth 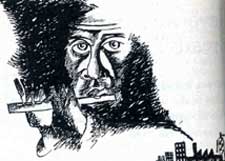 Truth is what once my father taught me,
but that was years and ages back.
Today it gives me a cynical look from the ozone hole.
Its voice has lost its music, choking on chlorofluorocarbons,
it is just a voice that has airlessness to cross.

What do I care about leaders such as Bush or Major?
Or the nuclear power plant in Iowa I visited once,
or the deep, fiery throat of NASA?
Or European autobahns, or the ad for cat food which says:
'Shouldn't your cat eat like a hero too?'
The stomach of hopes begins to empty itself
when we stop to rest and think.
Nothing but green bile comes up even at a domestic summit.
Nothing but the inexhaustible delirium
of a solitude that runs away as we continue to stalk it.

God really knows how to fill the hungry bellies
in Africa and Asia with the silence of his voice.
God knows, and so he has gone on and on,
like the truth about those questions
he has never answered and I so want to forget.