Yet another tale of missed opportunities 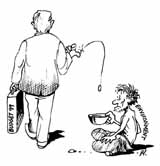 once again, the Union Budget has failed to break new ground or provide direction as far as environmental policy is concerned. Yet, there was reason to hope that this time, things would be different: for the first time, the pre-Budget Economic Survey of the government included a chapter on sustainable development and environmental policy. While the analysis left much to be desired, at least it was a beginning. The environmental community in the country viewed it as a signal that at long last, the mandarins in the finance ministry had recognised the economy-environment linkages, and were ready to do something about environmental degradation that threatens the very viability of economic growth.

Eminent economist Ashok Lahiri aptly likens the relation between the Economic Survey and the Budget as that between the diagnosis of an illness and its treatment, respectively. In terms of this metaphor, one can argue that the government's diagnosis of environmental problems is flawed and the treatment absent. Indeed, one has to search high and low in the Budget proposals to find any clue to the government's intentions to address the environmental problems described in the Economic Survey in graphic detail. It is, therefore, reasonable to conclude that when it comes to the environment, the government's rhetoric is once again not matched by action.

One may, of course, cite the additional duty of Re 1 per litre on diesel as an example of an environmentally friendly measure. It is evident, however, that this move was primarily motivated by revenue considerations. The benefits of this levy in terms of reduced air pollution and traffic have not been worked out. Also, given that air pollution varies spatially, this is perhaps not the best way to address the problem in the first instance. While the government may try to garner environmental kudos ex post through this move, one must remember that serendipity does not sound economic policy make!

With respect to direct taxes, the only significant proposal from an environmental perspective is a tax holiday for processing of biodegradable wastes. While this is laudable, one wonders why similar concessions have not been extended to other types of wastes such as fly ash.

In sum, the Budget displays a remarkable lack of vision on the revenue side vis--vis the environment. By remaining narrowly focused on tinkering with the tax code, the government has once again missed an opportunity to implement innovative market-based instruments ( mbi s) such as pollution taxes, which were recommended over two years ago by the Task Force on mbi s for Industrial Pollution Abatement.

In the context of air pollution, a number of proposals have been made to the finance ministry, such as the one by the New Delhi-based Centre for Science and Environment on the introduction of an environmental excise duty on new vehicles based on their tailpipe emissions. But these too have been ignored. What is worse, the government, in a somewhat schizoid manner, persists in reiterating that mbi s should be used but refuses to do anything specific about them.

On the expenditure side as well, the proposals lack imagination and suffer from a tunnel-vision mentality. If one examines the expenditure Budget, it reveals a smorgasbord of projects and activities without any discernible pattern. Moreover, there is no sense of what the returns are to the Rs 811.48 crore that have been allocated to the ministry of environment and forests ( mef ) under the Budget. What is needed instead is a clear articulation of a vision that focuses on the underlying incentive structure that causes environmental problems and the measures to alter these incentives.

Then again, there is the moot point of what is the output of the huge staff of 5,350 in the mef on which a total of Rs 52.26 crore are proposed to be spent in 1999-2000. Of course, the babu s may well argue that while the average expenditure per mef employee works out to a generous Rs 97,682, this is only marginally higher than the Rs 82,929 per employee for the Central government as a whole. In other words, the fat in the government is endemic and one should not pick on the mef alone.

To conclude, it is perhaps just as well that we do not get carried away by the flavour-of-the-month approach of the government to environmental problems. In the ultimate analysis, it is not the government or the international donors but the people themselves -- through direct action, public interest litigation and in alliance with the courts and the ngo s -- that are the best hope for India's environment.

The author teaches environmental economics at the Delhi School of Economics, University of Delhi.