It’s time to think up novel ways to manage waste

Benjamin Franklin, one of the Founding Fathers of the US, had once said, “The only things certain in life are death and taxes.” But there is a third certainty in life; that is garbage or solid waste in technical lingo. Yes, the smelly stuff we choose to keep out of sight, and hence out of mind, is a reality that needs urgent attention.

The issues of dumping grounds filled close to their capacity and protests over incinerating garbage are not unique to India. Neither are the recent revelations of overcharging for transportation of waste to dumping grounds and massive tipping fees. (Waste treatment facilities and dumping grounds charge garbage haulers a tipping fee or gate fee per tonne or load of waste.) About 5,000 years ago, the world’s first recorded landfill was built in Knossos, Greece. Huge quantities of waste were buried in large pits, with soil layered throughout. Landfills have since remained a popular idea, not because of their usefulness but because of the dearth of disposal options—what exactly can one do with garbage?

The new-age ideas for garbage disposal began with trials and errors. Between 1885 and 1908, the US sought to tackle the problem via incineration, aptly known as “destructors” at that time, by building close to 200 incinerators. In 1905, New York City even used the incinerator to generate electricity to light the Williamsburg Bridge. But by 1909, as many as 102 of 180 incinerators were made defunct or dismantled because they had either been inadequately built or had outlived their purpose; apparently the vast tracts of free land in the country meant that its government did not place the same premium on land that we do today. Thus, dumping garbage was the cheaper option. Reclaiming (a fancy word for filling) wetlands near cities with garbage also became a preferred disposal method.

The great American economic boom brought about an all-time consumer high, so much so that the chairperson of President Eisenhower’s Council of Economic Advisors declared that the US economy’s “ultimate purpose is to produce more consumer goods”. With it came more garbage. As use of paper, plastic, tin and aluminum as packaging material came into vogue around the first three decades of the 20th century, the choice started tilting in favour of other waste management options like recycling and composting. The year 1976 saw the US pass the Resource Conservation and Recovery Act that required all dumps to be replaced with sanitary landfills. This considerably upped the costs of waste disposal, making state governments look towards resource conservation and material recovery. 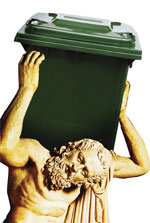 Fast forward to today, several countries have recognised the worth of recycling—not necessarily for environmental good but as a necessity because landfill space is at a premium, and it actually costs citizens much more to throw away trash than not generate it in the first place. In certain areas of the EU, North America and Asia, citizens are charged a fee depending on the amount of trash they leave out for garbage truck, with systems becoming sophisticated enough to penalise “wrongdoers”; all residential garbage is tracked using radiofrequency identification tags. These efforts have helped reduce residential wastes from 10 per cent to 40 per cent and increase recycling rates by 30-40 per cent.

Clearly, people have to be urged to generate less waste and recycle. The feel good factor (as we Indians can testify) is not enough. But what happens when too much is being recycled? Prices in the recycling commodity markets (yes, they exist) worldwide fell between 2009 and 2012. Prices for recycled resins dipped due to the downward movement of fuel prices. Volumes and prices for old corrugated containers in the US’ recycling commodity markets are closely tied to China’s economy; the slower the economy, the lower the demand and the larger the fall in prices. It is estimated that the downward trend in volumes and prices for recovered newspaper will grow, thanks to the popularity of tablet computers, newspaper apps and e-billing. The recycling value chain is closely linked with the global economy. Even local recycling markets are governed by the law of supply and demand, though they may not be hit as badly. At times when recycling facilities are forced to cut back on curbside recycling, people tend to go back to doing what they were doing previously—sending recyclable stuff to the landfill.

All this does not mean recycling is bad or land filling (not indiscriminate dumping; the two are different) is the last resort. Governments need to think up novel ways to help (mostly coerce) citizens to manage their waste responsibly. This needs a strong will backed with sound knowledge and vision.

Mahazareen Dastur is an environment researcher and writer based in Mumbai. She blogs at mahazareendastur.blogspot.com