Extensive coal mining in Raniganj, Bihar, has not only displaced communities but has also affected the lifestyle of the locals 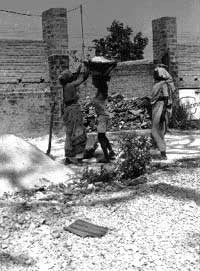 the degradation of the environment as a result of mining has attracted the attention of experts across the world. However, the impact of mining on the communities and the economies of these regions has not quite been the focus of their attention. In the Raniganj coalbelt in Bihar, 'development' has caused ecological and cultural breakdown. It has transformed communities into groups of uprooted and alienated individuals searching for identities. People living in the vicinity of three mining projects, Sonepur Bazari, Kottadih, and Jambad, have apparently been displaced. There has been a displacement of entire communities from their traditional livelihood. This was because there was a shift in their occupational pattern depriving the poor of their traditional rights that came with the ownership and use of land and other resources.

The coal mining sector in India has been responsible for large-scale displacement of people, particularly the tribals. As mining companies, both private as well as state-owned, undertook ad hoc mining the tribals had to leave their subsistence activities. Survival was difficult for the tribals as the companies did little to help them in acquiring the skills required for a job in the industry.

Leasing of land by the Eastern Coalfields Limited (ecl) for underground and surface mining caused widespread degradation of land and previously cultivated and forested tracts turned barren. The inhabitants -- Santhals, Bauris, and similar groups -- were badly affected due to the past two-and-a-half decades of plunder of resources.

Pauperization is a real process operating in Raniganj. After the ecl 's identification of a certain tract for initiating mining operations, there is a scramble for sale and purchase of land.

In the next stage, when actual mining begins, there is a halt in agricultural activities, massive deforestation, dereliction of land, and deterioration in air-water-soil quality. There is lowering of the groundwater table leading to drying up of ponds. The poor people have to bear the brunt of environmental degradation. Thus, accentuation of poverty and erosion of subsistence base through lack of access to, and deterioration of common property resources led to pauperization.

One way of reasserting the tribals' and other people's claim on their traditional resource rights has been described by the ecl and some media as 'illegal mining'. In this kind of mining narrow holes -- the opening often being less than a metre in radius -- are dug and the worker is forced to work in a space that barely permits him to squat. In certain patches where coal occurs close to the surface, small scale enterprises have come up in large numbers and they now sustain a large number of people. Here police harassment is common as the state wants to protect its property. Thus the locals are again deprived of livelihood.

Desperate to earn a living, the tribals have also invaded abandoned underground and open cast collieries. There have been instances when concrete seals of abandoned mines were broken to remove the left over coal.

Another area of such illegal coal mining is the sandy bed of the dried up Damodar river. Sand quarrying from the riverbed is a common feature throughout the river's length in the region. Here too, coal occurs close under the sand on the river bed and the temptation to remove coal is too strong to ignore. Thus an ordinary human being, with deep attachment to the land, turns into a scavenger. This person is not concerned about the potential dangers being created by him for the well being of his community.

The value-system alters as the state fails in its duty to protect rights of its own people in order to serve the needs of a better-off group. Since the poor have little bargaining power, they are forced to join the mining industry at the lower-most rung.

The social impact of environmental degradation thus becomes visible. There has been an increase in drinking habits of the residents. Other problems like ill-health, domestic conflicts, wife beating/desertion, illegal drug-trafficking etc. are common among the displaced population. Poor women are often forced to find work as labourers with contractors, or are drawn towards illegal private mining enterprise. Often, they turn into sex workers and cater to truck-drivers and immigrant miners, or simply work as rag pickers.

Kuntala Lahiri-Dutt teaches in the department of geography, University of Burdwan