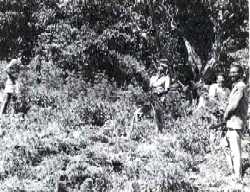 THE LAST patches of virgin rainforest in Kerala are up for grabs for anyone with an axe who can cut around bureaucracy. Although the state government maintains that the state's forest cover is 27.83 per cent, independent observers stress that it is actually less than 10 per cent. And they are supported by cartographic anomalies and government records like the one that shows settler towns like Kattappana as evergreen forests.

The rainforests are innocent meat for loggers, poachers, encroachers and developers. But the latest assault has been launched by Indian hemp (ganja) cultivators who find illicit money somewhat more prompt than traditional cultivation. Ganja cultivation is spelling doom for the richest pockets of the rainforests in the southern parts of the Western Ghats. Proud terrain that has so far managed to ward off human predators with the help of leeches and wild animals is now being broken in by ganja.

Usually, whole gangs sneak into the moist river watersheds where the ganja plant flourishes (it doesn't grown in the shade) and clear the area. Some gangs even run their own crude drug refineries. These groups, controlled by a drug-poacher-logger cartel, camp at the spot till the entire crop is harvested. Cultivators are taken to these hideouts without letting them know the location. In passing, the gangs also kill endangered and endemic species like the Nilgiri Tahr, Lion-tailed Macaque, Nilgiri Langur and the Great Indian Hornbill. The larger animals they scare away from the forests by shooting and injuring them.

The ganja fields are located mostly near the Tamil Nadu-Kerala border, which facilitates escape during raids from either side. Intense activity has lately been reported in Kerala, Tamil Nadu and Karnataka. The main centres in Kerala are the Idukki region, with its Periyar Wild Life Reserves, the Pooyamkutt area, the Chimmini Dam catchment area in Trichur and Agastyakodam. The contiguous areas of Srivilliputhur, Palani Hill, Annamalai and Meghamalai in Tamil Nadu and Coorg in Karnataka are also said to be teeming with activity.

Occasionally, forest department and law enforcement officials put up a ham-acted show of destroying the plantations. Local people give little credence to the drama, maintaining that forest department officials have a stake in the plantations. In fact, in 1992, senior police officials at Idukki, including a deputy superintendent and a circle inspector, were found guilty of trading in seized ganja. Veteran environmental activist S Prabhakaran Nair recently told a meeting in Thiruvananthapuram that he was witness to a clear-felled tract deep in the forests off Idukki, which, according to the information he had, belonged to a state minister.

The Forest Protective Staff Association maintains that it is unable to counter the menace because of a weak Narcotic Drugs and Psychotropic Substances Act. It can only inform the police, giving the gangs enough time to make a getaway. Poor coordination between different enforcement agencies like the police, excise and revenue intelligence is a major problem, prompting requests for a Central agency to take over the operation. There is also need for aerial surveillance because the affected regions are mostly inaccessible and difficult to locate.

To begin with, the three state governments will have to sit together and sort out a programme of action. Reports say that criminals from the Tamil Nadu side of the border are manning the pockets. The Hindu reported that Madurai and the port of Tuticorin had become major conduits for drug trafficking. The Sri Lankan Tamil refugee plantation workers in the belt are also suspected to be connected with the trafficking from Sri Lanka.

There have been reports of foreign tourists arrested in Idukki with large stocks of marijuana. Innocent tourists in nearby Thekkadi provide them with the necessary cover. Attempts by the state government to usher in tourism on a large scale is likely to increase the number of tourist drug couriers.

P R J Pradeep is associated with the Centre for Industrial Safety and Environmental Concerns, Kerala.