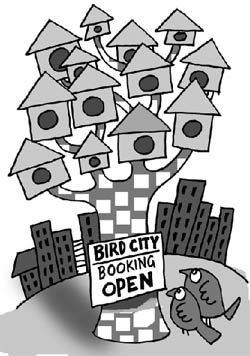 Meticulous studies by even small environmentalist groups can go a long way in determining the pressure on urban areas. This has been shown time and again during the course of data collection by various study circles like bird watchers, non-government organisations (ngos) working in small towns and student groups in big cities.

While these pioneering assessments are in no way complete, they can trigger debate, criticism and awareness about the impact of rapid urbanisation on the biodiversity. Though significance was attached only recently to this subject, urban wilderness has been noticed since long. Major General H P W Hutson's The Birds about Delhi was published way back in 1954. Around the same time, ornithologist Salim Ali noted how he was thrilled to record, time and again, the same migratory species of birds in his small patch of garden in the middle of Mumbai. Today, with urban areas expanding at an average rate of a kilometre its impact on the environment in the name of development is bound to take place. And what better measure of this than through scientific compilation by various study circles.

A recent study by a group of college students in Pune, under the guidance of an ngo, ranwa reveals how rich the city is in terms of the diversity of wildlife and how the sprawling of the city is slowly but surely resulting in extinction of many species in recent times.

The group during their survey of their neighbourhood found over 300 species of birds and trees, over a hundred species of butterflies and mammals, and over 250 varieties of fish. Other metropolises have also recorded similar richness, equal to or more than most protected areas. The urban areas still have a variety of habitats: water bodies, parks and gardens, and forests which attract a host of species. Even the city garbage dumps attract scavengers such as vultures.

While there is a general decline of diversity along increasing human impact gradient like the city centres, it is not uniform with all forms of life. The diversity of fungi, herbs and trees, for example, is much or more in human impacted habitats than in low impact zones. But the diversity of sensitive organisms like the fishes or birds was lower in these areas. Although urban areas maintain considerable biodiversity, unique or rare species such as eagles and hornbills are often found to be replaced by more stress tolerant species such as crows. The conversion of old houses into skyscrapers has often triggered loss of populations of squirrel or snakes or civets. Conversion of old growth wilderness areas for conversion to manicured parks may result in many bush-dwelling or tree-nesting species disappearing.

One of the most phenomenal monitoring exercises was perhaps the nationwide waterfowl count spearheaded by the Bombay Natural History Society ( bnhs ) and Asian Wetland Bureau ( awb ). Though no results appear to have been churned out from this exercise, smaller groups have triggered locality specific data literacy, as evident from efforts of Prakriti Samsad, a birdwatcher's group at Calcutta that has published their data. Similarly, Kalpavriksh, an ngo is initiating data analysis and publication from monthly bird counts across Delhi over a decade, besides having recently published a field guide to promote monitoring.

These efforts would hopefully generate broader consciousness and social pressure to serve as living indicators of the human habitat. Notable decline in certain species like the sparrows and vultures, being noticed and debated currently, may prove to be a signal of impending calamity. The purpose of monitoring would then be served much beyond academic interests. Urban wilderness management is globally relevant as being gradually recognised by the Millennium Ecosystem Assessment project launched by the United Nations Development through the World Resources Institute. Living organisms certainly serve as efficient indicators that work as barometers to scale the human pressure. n

The authors are members of ranwa , a Pune-based non-government environmental organisation