Neither the city nor the sea will relent

As a result of climate change and uneven development, fishing communities in Chennai are caught between a seaward moving land and a landward moving sea

As a result of climate change and uneven development, fishing communities in Chennai are caught between a seaward moving land and a landward moving sea 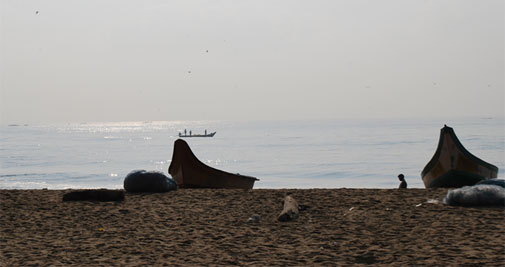 For generations, fishermen along the coast of Chennai have been able to locate their daily catch with almost scientific precision. Today, fishermen are reporting fundamental changes in the behavior of the ocean and marine life. They talk about the decline and disappearance of species.

Sridhar, a sixty four year old fisherman from Urur Kuppam, has invested lakhs of rupees in catamarans and nets used to catch everything from sharks to anchovies. Much of the gear now remains idle.

“If things do not change,” Sridhar, who has been fishing for more than fifty years, said, “my children will not be able to make a living fishing in ten years.”

These ominous warnings are echoed in the Intergovernmental Panel on Climate Change’s (IPCC) much-anticipated Fifth Assessment Report (AR5), which suggests that the Indian subcontinent is likely to be among the regions worst affected by climate change. Based upon hundreds of peer reviewed scientific publications around the world, the report concludes that marine species are shifting their “geographic ranges, seasonal activities [and] migration patterns” in response to climate change. Such changes pose a direct threat to fishing communities and coastal ecologies.

The loss of marine life represents just one of the existential challenges confronting fishing communities as a consequence of climate change. According to the IPCC report, sea level rise (which is, in part, caused by the accelerated melting of polar ice sheets) will continue to erode and submerge the beaches on which fishing communities live and work.

Of course, the effects of anthropogenic climate change cannot be divorced from other man-made urban and environmental hazards. As the IPCC authors emphasize, “uneven development processes” and “multi-dimensional inequalities” shape differentiated vulnerabilities and exposures to climate change.

These “uneven development processes” are visible in Chennai. Over the last twenty years, processes of urbanization have transformed the seashores of the city, which are composed of a mosaic of interdependent beaches, sand dunes, tidal marshes, estuaries and mangroves. These features constitute the city’s natural shock absorbers; they protect the urban watershed from storms, erosion, salt-water intrusion and sea level rise.

These land use changes ultimately reinforce existing geographies of socio-economic inequality and vulnerability. Nearly a decade after the Indian Ocean tsunami struck the coast of Chennai, fishing communities are perhaps more vulnerable than ever to a range of disasters.

As a result of climate change and uneven development, fishing communities are caught between a seaward moving land and a landward moving sea. “We have been here for generations,” says Sridhar, “Yet the city does not seem to want us. We would like to have a city where we have a place; we want to enjoy the city as rightful citizens.”

Will state authorities protect the lives and livelihoods of coastal fishing communities and the species of marine life on which they depend? Or will forms of uneven development and vulnerability continue to proliferate on the coast?

Tamil Nadu authorities are in the process of drafting a State Climate Change Action Plan (SCCAP). The draft plan proposes to “strengthen [the] resilience of fishing communities” by assessing the impact of climate change on fish catch and designing programmes to ensure fisher livelihoods. Yet these provisions, and the broader notion of resilience discussed in the plan, remain ambiguous.

According to K. Saravanan, an activist from Urur Kuppam, “The state has long prioritized coastal real estate development above the rights of fishing communities and coastal habitats,” he said. “Unfortunately the State Climate Change Action Plan fails to move decisively in another direction.”

Saravanan’s concerns resonate with others raised at an independently organised SCCAP public consultation meeting recently held at the Madras Institute of Development Studies. The meeting – which was attended by dozens of climate change researchers, civil society groups, environmentalists and fishing community leaders – highlighted gaping holes in the current plan.

Astonishingly, almost no information is provided regarding which coastal habitats and communities in Tamil Nadu are most vulnerable to climate change risks, let alone an analysis of how uneven patterns of coastal development may amplify such risks.

Nor does the plan provide a substantive discussion of public health, an area of urgent concern in light of the challenges posed by climate change. Indeed, public health ought to be considered inseparable from any measure of resilience, which the IPCC defines as the capacity of social, economic and environmental systems to cope with and adapt to hazards and extreme events.

In a remarkable moment of candour, the SCCAP acknowledges that the Tamil Nadu Slum Clearance Board has evicted and resettled several thousands of families from slums originally located near inland water bodies to coastal areas. If global sea levels rise by one meter, the plan concludes that these settlements will be inundated. (The SCCAP does not disclose the data or methodology on which this claim is based). The plan therefore proposes to evict the poor once again and construct 7,500 tenements elsewhere in the city.

This kind of proposal, however, does not build resilience; it promotes insecurity by repeatedly disrupting the lives and livelihoods of the poor. Slum eviction and resettlement, moreover, often serves as a means to gentrify urban areas and promote private real estate development at the expense of the poor.

There is no guarantee that the SCCAP’s proposals to strengthen the “resilience” of fishing communities – which are classified as slums by the Tamil Nadu Slum Clearance Board – would be any different.

To ensure that the SCCAP is more than a perfunctory exercise, state authorities must actively work with fishing communities to strengthen the physical and social infrastructures (including public health) of coastal settlements. Fisherfolk’s extensive knowledge of their own communities can and should be integrated into the SCCAP. Their insights are essential to developing a deeper and more nuanced understanding of how biophysical processes are refracted through forms of uneven development in an era of manifold climate change risks.

In absence of more rigorous research and adaptation planning in these areas, the concept of resilience is at best empty rhetoric and at worst an alibi for coastal eviction and gentrification.

Mukul Kumar is a doctoral student in City and Regional Planning at UC Berkeley’s College of Environmental Design. He can be reached at mukul.kumar@berkeley.edu.