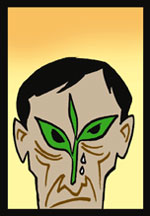 a shameful scam has been perpetrated in the hills of Uttaranchal. Some years before the new state was inaugurated the then Uttar Pradesh government conceived a grandiose scheme of acquiring 12,000 hectares of land to launch a number of tea estates. Thankfully, it now appears, most of the plan remained on paper, with only one estate getting off the ground. Thankfully, because in the process of acquiring the land the government painted a picture to farmers that can be called rosy only at a conservative estimate. The deal, to all intents and purposes, was that in return for giving up their lands on lease for 30 years, villagers would get an annual rent plus lucrative employment on the tea estates.

Unfortunately, the fine print proved the undoing of those who had consented to give up their land.The litany of grievances is endless the working conditions are harsh; the stated daily wage is a pittance, and given the output clauses and the estate's productivity, even this wage is whittled down considerably; and on an average only one or two members of a family get employment, with the further caveat that even this is not guaranteed throughout the year. What all this adds up to, the farmers now realise to their chagrin, is that their incomes have gone down considerably and for most the business of keeping body and soul together has become immeasurably tougher. The government, of course, denies this situation exists, maintaining metronomically that the scheme has actually provided additional income to the hill farmers.

That's not the only lie that has to be nailed. The government also maintains that the land on which the tea bushes are coming up are pastures -- as a matter of fact most of these lands are agricultural land. And the farmers are now quite clearly regretful that they cannot even grow their own food, having to go to the market even for the basic necessities with severely straitened resources.

So what is the moral of the story? That in the golden age of liberalisation and the ascendancy of the market marginal people -- like Uttaranchal's hill farmers -- are being hemmed in from all sides. They are fair game for realtors, looking to build getaways for city slickers and industrial interests, hungry for land to push the 'development' graph into even more stratospheric levels. Unfortunately, as in this case, the government, which at some level is surely expected to protect their basic rights, is also in the business of preying upon them. For, while the farmers try to make ends meet, the government seeks to profit from its enterprise.