Little did I know that the seven of us would be branded "Maoists" when we set off for a protest rally against posco in Orissa on April 1. We had reached Bhubaneswar a day earlier and booked a taxi to Dhinkia, a hamlet 10 km off Paradip port. A local boy travelling with us sounded out the prospect of having to walk down the last kilometre by the coast to "avoid trouble"; he had information that a police vehicle was doing rounds of the area.

But that wasn't necessary. The night provided us with enough cover to reach our destination. Later, we were told that 25 armed platoons of Orissa police had been deployed in the area. On April 1, we marched towards the Balitutha bridge near the plant site along with thousands of villagers. A steely resolve, mixed with seething rage, was writ large on their faces as they shouted " posco hatao, Orissa bachao".

Hundred metres short of the police barricade, the protest turned into an uproar. Women broke into a run and brought the 20-feet high bamboo barricade crashing down. The security cordon stood around watching helplessly.

The headlines of Samaj, a local daily, the next day read "Maoist women enter Dhinkia at night." It insinuated the events at Balitutha to the Maoist women. We dismissed the tag as the state's paranoid obsession with the red brigade. We realized it was strategic rather than instinctive--an effective weapon in the state's propaganda arsenal against anyone opposing so-called "development projects".


Since November 2007, 16 armed platoons of Orissa police force have stationed themselves to contain resistance. Villagers from three panchayats--Dhinkia, Nuagaon, and Gadkujang--who stand to lose their livelihood and land to posco, defied prohibitory orders and assembled at Balitutha. posco had chosen April 1 to perform the ground breaking ceremony for their steel plant, but they called it off sensing the mood on the ground.

Billed as the single largest (about Rs 51,000 crore) fdi project in the country, it promises to create 13,000 jobs in the proposed steel plant, captive port (in Paradip) and iron ore mine (in Kandadhar, Sundergarh district). The company also promises a lucrative resettlement and rehabilitation package which includes land for the displaced, cash compensation and homes. These benefits will also be extended to "encroachers".

Sounds like a good deal. Why then are the villagers, who do not even have roads or electricity in their villages, being so mulishly unreasonable? It's because they also see the magnitude of the loot. Over the next 30 years (which can be renewed and extended by 20 years), posco will mine 600 million tonnes of high quality iron-ore from the Kandadhar hills, and pay a fraction of the current global market price to the state. The current market value of iron ore is about Rs 7,200 per tonne, which translates to about Rs 432,000 crore for 600 million tonnes. posco, however, will pay at Rs 27 per tonne as royalty--Rs 1,620 crore. According to the mou, posco will be allowed to take 30 per cent of raw iron ore out of the country.

It's not just the swindle that people are angry about. They are worried more about the damage to their local economy which thrives on fertile lands, forests and rivers, all threatened by the project. posco requires 1,620 hectares (ha) for its steel plant and 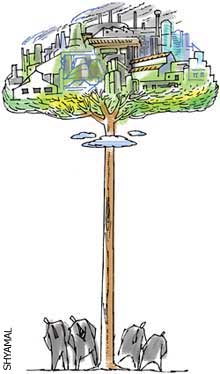 port in the Jagatsinghpur district. Of that, the government owns about 1,426 ha (mostly forestland) and 194 ha is held privately.

For its proposed mines in Kandadhar, posco wants a lease of 6,209 ha and is awaiting the forest diversion clearance from the supreme court. posco has also been ensured 150 billion litres of water supply from the Mahanadi barrage at Jobra, which will affect 80,000 ha of farmland in five districts of Orissa and drinking water requirements of Cuttack and Bhubaneswar.

People in the proposed 'posco area' grow betel vine and cashew on forestland and send it to markets as far as Mumbai. During peak season a household earns Rs 8,000-10,000 a month. Fishery, another mainstay, is also in jeopardy. People are convinced that nothing can make up for the loss of their beautiful land and other resources.

Madhumita Dutta is a Chennai-based activist. She can be contacted at
madhumita.dutta@gmail.com