Wait for the monsoon continues

Stalled since about 10 days in a crucial agricultural month like June, the 'mood swings' of the south-west monsoon continue to keep half of India waiting

Stalled since about 10 days in a crucial agricultural month like June, the 'mood swings' of the south-west monsoon continue to keep half of India waiting

July is here, but the monsoon seems to have forgotten its schedule. As of  June 30, the last progress south-west monsoon made was around June 20 when it knocked at the doors of interior Maharashtra, parts of central India and Uttar Pradesh. The northern limit of monsoon (the boundary separating the regions where monsoon has arrived from those where it hasn’t) continues to pass through Surat (Gujarat), Nashik (Maharashtra), Sultanpur (Uttar Pradesh) and, till date, has roughly covered 50 per cent of India only.

Out of the total 36 meteorological subdivisions in India, 20 are now showing deficient rains (20 to 59 per cent less than normal), nine reporting scanty (60 to 99 per cent less than normal) rains but only seven are showing normal rains (+19 per cent to -19 per cent of normal). Last year during this same period (June 1-June25/26), only three subdivisions were showing deficient rains and just one was reporting scanty rainfall. There is NO subdivision reporting excess rains (+20 per cent of normal or more than that) this year as against 26 sub divisions last year. Till June 18, Andaman and Nicobar Islands were reporting excess rainfall but as the week passed, rains decreased there also and the subdivision lost its advantageous position.

Meanwhile, rainfall will be continuing in the north-eastern states of India in this week. Let's have a look at the other parts of India. 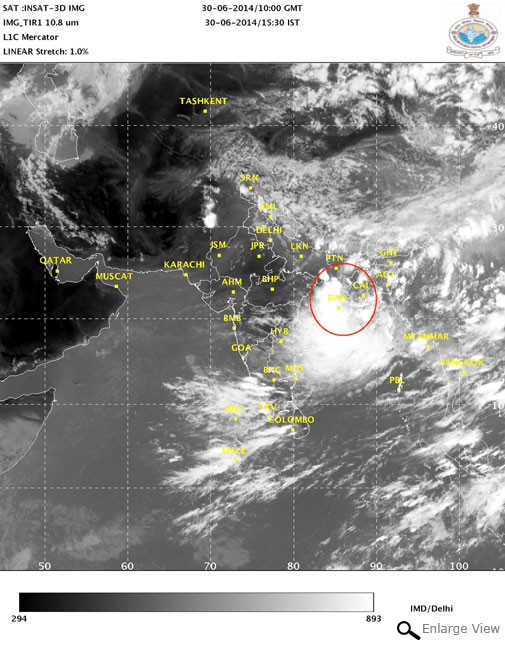 During every monsoon, low pressure systems from the Bay of Bengal (abbreviated as Bay systems) often bring heavy rains, floods in central India and bring good rains in eastern Gujarat, also along with western Maharashtra. Starting from around July 5, a low pressure system will be bringing good rains to eastern India, which includes Odisha, Chhattisgarh, Jharkhand, and then the rains will be spreading into central India (Maharashtra and Madhya Pradesh). This rainfall will likely have a lion’s share in reducing the rainfall shortage in highly rain-deficient areas like Marathwada (where 75 per cent less rains have been recorded),Vidarbha and surrounding areas which will boost sowing. Central India will witness maximum temperatures of the order of 40°C but from July 5-6, rains and cloudy weather will bring down the temperatures in the 30°C range.

It is too early to say whether this system will decrease the rainfall worries for Gujarat or not.

In the next two to three days it will be clear whether this system will bring localised flooding in central India or not and hence people in these areas must follow the weather updates.

Till July 3, heavy rains can be expected in Uttarakhand and western Jammu and Kashmir (J&K), which includes Chardham areas and the Amarnath Yatra route. As there aren’t sophisticated ways like Doppler Radars to detect heavy rains and their possible impacts, a temporary suspension of the yatras may help avoid weather-related problems. The yatras may be resumed after July 3 or 4 when the weather clears up.

Monsoon's advance
As rains will be expected in some parts of Himachal Pradesh, J&K and Uttaranchal, India Meteorological Department (IMD) will likely declare the onset of monsoon in these areas in the next three to four days. The wait for monsoon will continue across remaining areas like Gujarat, Rajasthan, Punjab, Haryana, Delhi-NCR in this week with maximum temperatures in the 35-40°C range. However some thunderstorm rainfall can be expected in this week but overall the weather will be hot and humid. Even if IMD declares monsoon onset in these areas, it won’t be a grand event as heavy rains are still away.

Will the monsoon really revive in July?

A strange, kind of conflict is going on now between World Meteological Organization, which has painted a grim picture of El Niño affecting rains during the monsoon, and IMD, which expects revival of rains in July. IMD seems to be betting on the long-range weather models (models depicting weather scenario beyond six days from today) which are indeed very fluctuating.

Weather models are analogous to the geography maps we have studied during our school days but the difference is that weather maps (models) show latest/future more number of atmospheric conditions unlike the historic earth based observations of geographical maps. Beyond a period of five to six days, weather models often lose track and are deceptive mostly hence its difficult to say that whether the rains will completely or partially revive in July or not. A weekly monitoring is must to get a better idea.