Going against the predictions of other meteorological agencies in the world, Japan Meteorological Agency took a bold step by announcing the onset of El Niño onset

Going against the predictions of other meteorological agencies in the world, Japan Meteorological Agency took a bold step by announcing the onset of El Niño onset

As curtains draw on 2014, we can now safely assume that the year has passed with just the buzz on El Niño. The phenomenon, which was expected to form in the summer period of the northern hemisphere and impact global weather events like Indian summer monsoon, has not put in an appearance till now.

At the end of July, I wrote a blog  discussing what an El Niño is and why it wasn’t shaping up then.

Throughout 2014, the atmosphere didn’t perfectly respond to the ocean, which means that the ocean right now is "El Niño-like" but the atmosphere is “non-El Niño like”. International weather agencies, like the Climate Prediction Center (CPC) of the US and Bureau of Meteorology, Australia (BOM), declare El Niño onset only when both the factors—atmosphere and ocean are “El Niño-like”. Both the agencies continue their watch for El Niño but they haven’t declared the onset yet.

However, many people were surprised to find news  on the arrival of El Niño. This news had come from Japan Meteorological Agency (JMA). Just like CPC and BOM, JMA monitors the Pacific Ocean in its own “style”. JMA, in its December El Niño outlook, announced, “Five-month running mean of the NINO.3 SST deviation was +0.5C or above for four consecutive months from June to September, which means a weak  El Niño event has persisted since the Northern Hemisphere summer.” At the same time, the outlook also mentioned that the atmospheric conditions do not indicate clear features of El Niño events.

This is because JMA’s definition of El Niño is different from that of CPC and BOM. JMA considers a patch of equatorial Pacific Ocean (called as the Niño 3) and monitors the deviations in the sea surface temperatures (SST) of that patch. The region having the latitude between 5°N and 5°S, longitude between 150°W and 90°W is the Niño 3 region. On the other hand, CPC has divided this Niño 3 into two parts. The western half (part towards Indonesia) is called Niño 3.4, which extends between the same latitudes but between the longitudes 150°W and 120°W. Plus some more part (5°N-5°S and 150°W-170°W) is considered and the entire region of 5°N-5°S and120-170W comprises Niño 3.4. This is a key region for CPC because CPC considers the El Niño status based on the Niño 3.4 SST anomalies. Three-month running mean (average) of the SST anomaly in Niño 3.4 is calculated. This makes an Oceanic Nino Index (ONI).

As per CPC, an El Niño onset maybe declared when it has at least five consecutive ONI having values equal to 0.5 or greater than it. Along with ONI, atmospheric conditions should be El Niño-like and then the declaration is done.

JMA, on the other hand, calculates a five-month running mean of SST deviations in the Niño 3 region. An El Niño, according to it, would be when this five-month mean of SST deviation in the Niño 3 equals 0.5°C (or greater) for at least six consecutive months. JMA gives lesser importance to the atmospheric conditions as compared to CPC and BOM. From June 2014, this five-month mean has exceeded, or, at least, equalled 0.5°C in the Niño 3 region. At the moment there are four such months (June, July, August, September) which have met the threshold conditions but the calculation for October and November is yet to be done. Despite this, JMA has declared an El Niño which could be termed a “bit premature”.

Weather conditions which are normally seen during an El Niño are being witnessed in places surrounding the Pacific Ocean, like South America. As of now, BOM, Australia, has put out an El Niño alert. According to it, there is at least a 70 per-cent chance of El Niño shaping up in the coming months. CPC says that there is about 65 per cent chance that El Niño conditions will be present during the northern hemisphere winter, which may last till the spring of 2015.

What we now know is that the SST anomalies have touched the threshold values for an El Niño in the equatorial Pacific Ocean. Warm sea sub-surface and sea surface continue to persist from many weeks, thanks to the recent propagation of Kelvin Wave, which affects the Pacific Ocean. 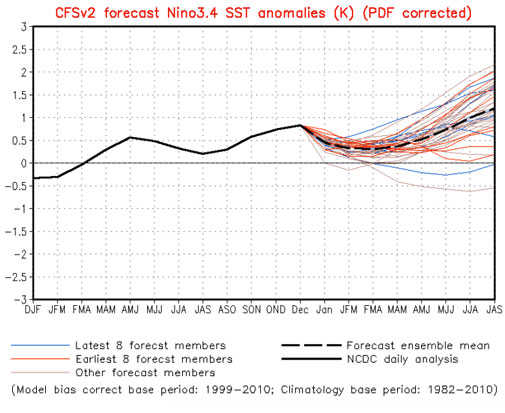 The Climate Forecast Model (CFS v2) suggests that the SST anomaly in the Niño 3.4 region would be falling below the threshold of 0.5 from January 2015. If this happens, El Niño declaration parameter of ONI wouldn’t be met and we wouldn’t have an El Niño in 2015.