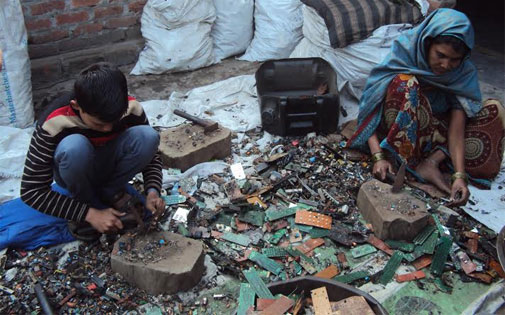 The draft of e-waste rules, 2015, has broadened the scope of the existing one by including several major provisions. Earlier, there were several deterrents in the rules for stakeholders which prevented their proper implementation.

The new draft rules now boast of clarity and lay down the responsibilities of various stakeholders in clear terms.

However, it still neglects a few major areas in e-waste management where immediate attention of regulators and stakeholders is required.

Some new stakeholders have been added to the new draft rules. Refurbishers, dealers and producer-responsibility organisations (PROs) are some of the inclusions made in 2015. Refurbishers are those who repair used electrical and electronics equipment. In India, a majority of electronic items is reused by people after repairing them or by handing them down to family members, friends and acquaintances.

Refurbishing usually generates a sizeable quantity of e-waste as a result of repair and assemblage of parts. The draft rules now require refurbishers to channelise the e-waste to a collection centre or to a dismantling or recycling facility.

Then there are individual dealers or firms, which buy or receive electric and electronic items from producers for bulk sale, wholesale and retail.

According to the new rules, dealers have been mandated to collect e-wastes in a box or a bin or else they can demarcate a deposit area.

The inclusion of PROs is another welcome initiative in the draft rules. They are professional organisations authorised collectively by producers, but sometimes they also act independently or on a public-private partnership basis. PROs can take the responsibility of a group of producers for collection and channelisation of e-waste generated from the ‘end of life’ of their products.

The concept works well in developed countries where a number of organisations come together to implement take back of e-waste financed by producers.
India being a vast country, setting up a collection mechanism is a huge challenge. If any of the brands try individually to reach out to all parts of the country, it will not be economically sustainable.

Another new feature that the draft rules have incorporated is the Deposit Refund Scheme. Under this, a portion of the sale price shall be retained by the producers and be refundable to consumers once the end-of-life products are channelised according to the prescribed methods.

However, getting the authorisation and registration complete with other necessary documentation was proving to be difficult for new entrants.

The new rules have simplified the formalities regarding authorisation and registration. It now asks producers to seek authorisation for carrying out Extended Producer Responsibility (EPR) from SPCB in case they are implementing it in a particular state or the Central Pollution Control Board (CPCB) in case of a pan-India implementation.

Rules have also categorised producers and manufacturers differently for ease of understanding. According to the draft rules, producers are manufacturers selling electrical and electronic equipment (EEE) under their own brands. They can also assemble EEE by other manufacturers or import them for sale in India.

Manufacturers are those persons, entities or organisations registered under the Companies Act, 2013 or Factory Act, 1948 who have facilities to manufacture EEE.

It was a point of contention that where and who the producers will approach to for authorisation if they manufacture in one state and sell it in another.

The new draft rules make it clear by assigning two different definitions for two different activities. The producers, which also include companies who import EEE for sale in India, will now have to seek authorisation for implementing EPR.

The draft rules have exempted collection centres from seeking any kind of authorisation and registration. It is a good initiative by the environment ministry and will allow more organisations and individuals to enter the e-waste management field.

It has also been made clear that collection centres do not require authorisation since they do not engage in any activity that can harm the environment.

EPR, which is a requirement to be fulfilled by the producers, was not clarified in the existing rules.

Reduction of Hazardous Substances (RoHS) mandated by the existing rules was to be complied by the producers of EEE within a period of two years since the rules were notified in 2011.

The new draft rules have covered this point. It says that CPCB will conduct random sampling of EEE placed in the market to monitor and verify the compliance with RoHS.

What still needs to be addressed?

More than 90 per cent of e-waste generated in the country is handled by the informal sector, yet the rules are silent on this issue. It is essential that any long-term policy on e-waste integrates the informal sector by including them in the mainstream.

The draft rules do cover almost all stakeholders. All of them have been assigned specific roles and will contribute towards their implementation. However, with limited human, financial and technical capacity of SPCBs and CPCB, it will remain a challenge to monitor so many players.

Penalty and punishment for non-compliance are in accordance with section 15 and 16 of the Environment (Protection) Act, 1986 which says that whoever fails to comply with the rules will be punishable with imprisonment for a term which may extend to 5 years or with fine which may extend to Rs 1 lakh.

Overall, the draft rules have incorporated new additions which will help in better management of e-waste in the country. The scope of the rules has now become wider and the CPCB and SPCBs will need greater manpower and technical capacity for monitoring compliance with the rules.