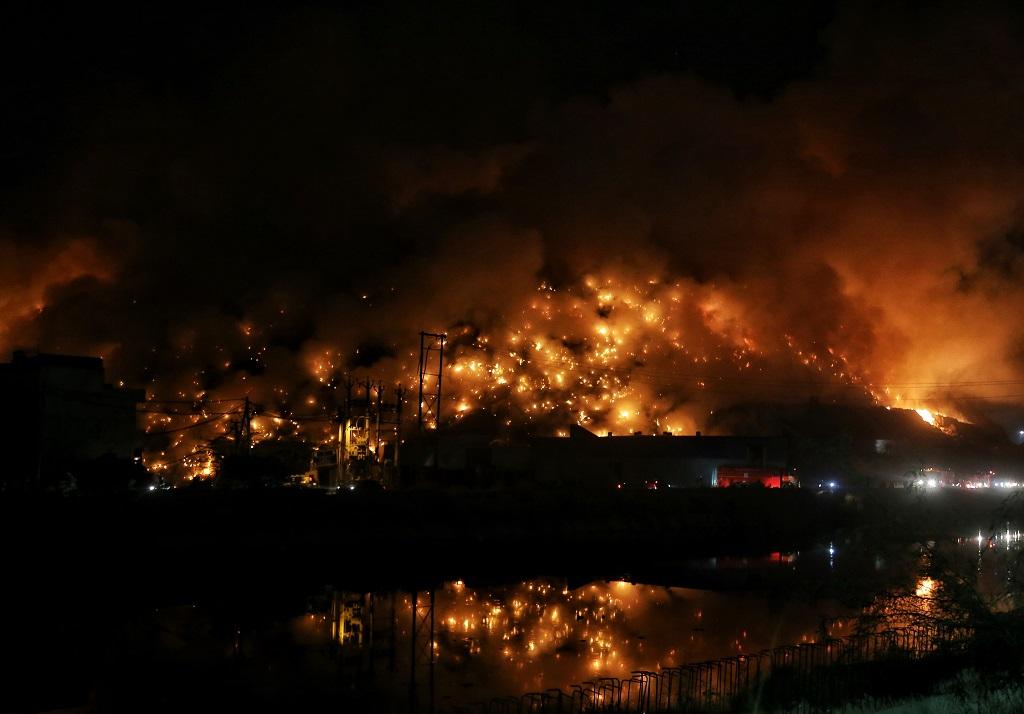 The fire that broke out at North Delhi’s Bhalswa dumpsite April 26, 2022 is the third landfill fire in a month and has been raging for over 72 hours.

Fires at landfills managed unscientifically can be prevented up to an extent but once ignited, will be extremely difficult to control, said experts. For sustainable operations at the site, compaction and soil cover as per the existing law is not followed in Ghazipur and Bhalswa dumpsites as preventive actions. Besides, indiscriminate dumping of mixed municipal solid waste and hot weather conditions are the root causes of these fires.

Fire outbreaks at high temperatures during summers become uncontrollable once ignited. The firefighters, workers, drivers and operators at the site, the nearby residents, daily commuters and everyone in the city is at risk because of these fires.

It is now highly critical for the city authorities to act with a far-sighted approach, not relying on temporary solutions and quick fixes.

As mandated by the government, the city is bioremediating the three dumpsites, including Ghazipur, Okhla and Bhalswa. However, it is essential to note that the municipal corporations in Delhi are still dumping fresh municipal solid waste at these sites.

Status of biomining and fresh waste dumping in Delhi

It is practically impossible to remediate the legacy waste if they add fresh waste every day. For example, EDMC treats nearly 1,000 tonnes of legacy waste per day at Ghazipur. Simultaneously, about 2,500 tonnes of waste is dumped at the site each day. This implies that the rate of fresh waste dumping is more than the legacy waste treatment, leading to a systemic failure in dumpsite remediation work.

What can Delhi do?

To avoid these fire outbreaks in the future, the city authorities must prepare a city waste management plan.

Source segregation non-negotiable: Treating ‘mixed waste’ is challenging. So a significant fraction of waste generated in Delhi is untreatable and ends up in the dumpsite. Segregation at the source is critical to ensure that waste can be diverted to different recycling facilities.

Many cities in India, including Panaji, Alappuzha, Indore and Bhopal, are practicing 4-way segregation to 6-way segregation. For this, a robust communications strategy to bring about behavioural change at the mass-level is essential.

Residents of Delhi should be motivated to embrace segregation which should be backed up by a robust monitoring system and enforcement through a series of by-laws by the municipal corporations. This can be achieved by the participation of all stakeholders and good governance.

No biodegradable organic waste in dumpsites: Biodegradable waste should not be dumped at landfills because the biodegradation process is responsible for generation of methane that contributes significantly in dumpsite fires.

The city needs to make sure that this fraction of waste (nearly 5,500 tonnes per day) is treated scientifically by a decentralised approach (composting or biomethanation).

Converting organic waste into bio-compressed natural gas (CNG) also can be a game-changer. Bio-CNG can be utilised to fulfil the city’s demand, including vehicle fuel requirements or bulk gas consumers like industries or institutions, the liquid soil conditioner as well as solid compost will be supplied to farmers for using it as organic manure on the farms.

Indore in Madhya Pradesh has installed a bio-CNG plant and produces 17,000 kilogram of CNG every day by treating 550 tonnes of biodegradable / wet waste. Reportedly, they are earning more than Rs 50 crore from bio-CNG and carbon credits.

Delhi can adopt a similar model as CNG is a cleaner fuel and has the potential to reduce pollution levels up to a great extent. Also, this will divert a significant fraction of waste (50 per cent) from reaching the dumpsites.

Dry waste recycling: The segregated dry waste can be processed in decentralised material recovery facilities with the help of nearly 50,000 informal workforces in the city. The segregated recyclables can be channelised to the recycling facilities, which is a potential source of revenue.

Adopt a zero-landfill model: This model is based on resource recovery and principles of circular economy that are socially, environmentally and economically sound, according to the CSE-NITI report on waste-wise cities.

It identifies a “zero-landfill city” as one that ensures maximum quantities of waste are subjected to scientific treatment and recycling, thus reducing the amount of residual solid waste and minimising the need to construct new landfills. The objective is to achieve 100 per cent waste treatment.

Delhi, as a metropolitan has a great potential to derive revenue from waste by adopting source segregation, treating the waste appropriately preferably in a decentralised approach and minimising the quantity of waste ending up in a scientifically designed and operated landfill are the key strategies.