Water v industry: where is the question? 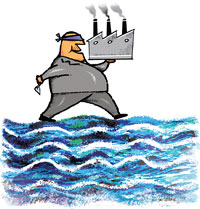 Some hundred people, men and women, were gathered on the hill. Many more, I could see, were trudging up. Their faces were resolute. I asked why they were opposing the cement plant.

Their answer was simple: “We cannot eat cement.” “But the plant will bring you employment and prosperity,” I said. The reply this time, with a touch of irritation, was: “We have our fields and now with the water in the tank we have good produce. We are not rich like you but we have food to eat.” I persisted, “But your land is not being taken away to build the plant. The government says it has only allocated village grazing land and wasteland to build the factory.” Their anger spilled out.

“Can you see the water in front of you?” I looked at the vast body of water stretching as far as the eye could see. “This Samadhiyala bhandara (reservoir) was built a few years ago by the government. It changed our lives as our fields, which gave us one crop, now give us two, even three. Now government has given this water body to the factory. We will not allow this.” Soon cries filled the air: “We will give up our lives but this factory cannot be built.”

From the hill, I could see the factory foundations being laid. It was in the middle of the lake, its boundary walls stretching into the water. How could this happen?

The 1.91-million-tonne-perannum cement factory with coke over and captive power plants, being built by detergent major Nirma, is in Bhavnagar district of Gujarat. The land allocated to the factory by the state government is categorised as grazing and wasteland in revenue records. It is for this reason, when the Gujarat High Court was hearing the petition of the farmers, government argued that since the land was not listed as a water body it had the right to allocate it to industry. No protection was needed because technically there was no water body on this land.

Why? Some 10 years ago, this region at the edge of the Arabian Sea was in trouble; agriculture was in distress and farmers impoverished. Each year as farmers drilled into the ground for water the seawater would enter the water below the land. Soon wells turned saline. Crops withered and even the size of coconut shrunk. The then state government came up with a big idea. Why not embank the rivers that bring freshwater into the sea, creating reservoirs, which would check advance of salinity and also provide irrigation for crops.

In 1999, the district collector of Bhavnagar allotted the land classified as grazing and wasteland to the executive engineer of the salinity control division of the district to build the Samadhiyala bandhara on the Shensuri river. In 2000, the earthen dam of 1,630 metres was built. It submerged 319 hectares (ha). A reservoir was built but its land use in government records was not changed.

The reservoir changed lives. After it three more such water bodies—Kalsar, Nikol and Malan—have been built. The water stretches some 40 km along the coast, providing a barrier between the land and the sea.

The structures are so important to people that they have invested personal funds in their repair and strengthening. Earlier this year people paid voluntarily to lay a pipeline over a kilometre to connect the water bodies so that the overflow of one lake can be channelised to another. They protect the catchment and have also built check dams on streams that bring water to the reservoir. The result is for all to see. During my visit in mid- December, well after the monsoons, the reservoir was brimming. Now battle lines have been drawn to protect this source.

First the state government and industry denied the very presence of the water body. The environmental impact assessment, used to grant clearance to the project, says the plant is on barren land. It does not mention the rivers that surround the site, bringing water to the reservoir. It does not even acknowledge the check dams, which the company has vandalised.

Later, when the truth of the water body was established using satellite imagery, the push was to find a compromise solution. In the High Court the farmers were told their water body would remain but only if they agreed to a partition—some 100 ha of the lake would be returned for irrigation. But they would have to agree to give away the rest, where the factory would be built.

Now farmers are running from pillar to post, explaining that a water body is a structure with a head in its catchment and body in the water. It will die if it is taken apart. Farmers also say the cement factory will get its raw material of limestone from the catchment of the same water bodies. Nobody asked for an impact assessment of this mining when giving permission to the factory.