We need our slaves

India tops the list of countries with huge numbers of modern slaves. But there is little outrage or concern here over what is an everyday reality

India tops the list of countries with huge numbers of modern slaves. But there is little outrage or concern here over what is an everyday reality 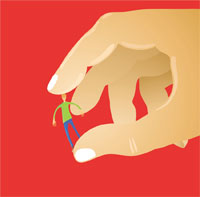 India is for the most part a Teflon society. Nothing sticks. It’s as if the grime and bloodiness of our largely medieval ways of thinking and acting have nothing to do with us. It’s always the problem of the “other”, invariably the fault of the “system” and “we” are not to blame.

Millions of young children work when they should not. Many of them are employed in hazardous industries. Many of them work as bonded labour for some small debt their parents or grandparents could not repay. But we all know that. Millions of women are similarly exploited and sexually, too. We are familiar with that. Men and boys are not free from this scourge either. Perhaps, that’s the reason the release of Global Slavery Index 2013 by Australia’s Walk Free initiative caused hardly a ripple here. The index put India as the country with the largest number of modern day slaves but there was no outrage, no collective horror.

How should there be? Slavery is part and parcel of our way; we live with it comfortably. How else would we run our homes, our industries, our service sector, our agriculture? India has in recent years zoomed to second place among cotton exporters. How else would we have managed without children picking cotton from the fields?

With an estimated 13.3-14.7 million enslaved, India accounts for almost half the 30 million slaves that this new index has found. These are overwhelming numbers—China comes a distant second with 2.9 million—but way below that estimated by the US State Department in its United States Trafficking in Persons Report 2013. That put the forced labour at an estimated 20-65 million, which to me sounds a more realistic assessment than Walk Free’s. But both emphasise the scale of the problem within India. Trafficking is mostly internal and as the latter notes with obvious shock: “Many of India’s enslaved have not been moved from one place to another— they are enslaved in their own villages.” So India ranks No. 4 in a list of 162 countries.

What has not escaped either of these reports is that most of the enslaved are from the lowest castes and other disadvantaged social strata—men, women, and children who are forced to work in quarries, brick kilns, rice mills, agriculture and garment factories. “A common characteristic of bonded labour is the use of physical and sexual violence as coercive means,” says the report. And it’s not just debt bondage to a local landowner but also because they are born into slavery because of caste and customary social and hereditary obligations.

A few years ago, Planning Commission member Narendra Jadhav had given me his book Untouchables, the story of his family, much of which was based on his father Damu’s diaries. I can never forget the searing, wrenching first chapter in which Damu is forced to guard a corpse found floating in a well in his village till the police officer from the nearest town came on the scene. That chore was given to Damu after he had run all day before the revenue official’s tonga to herald his arrival. Hungry and exhausted he guards the corpse for a day and half, and when the fauzdar arrives he is ordered to bring the body out of the well. All because Damu belongs to the Mahar caste of Dalits and is expected to do such things as a hereditary custom—and for free. For refusing to do as ordered Damu is flogged by the police and left bleeding and would have been killed had not the village chief intervened. That was in 1930.

In 2013, some of these egregious customs may have ended in many parts of the country but bonded labour, despite laws to end it, still flourishes. In 2011, an ILO Committee of Experts had urged the Government of India to carry out a national survey on bonded labour because findings from research studies had shown that millions of such workers were still being used in agriculture and in industries like mining, brick kilns, silk and cotton production and beedi-making. Although one such exercise to identify and rehabilitate bonded labour had been conducted some years ago, the ILO felt it was necessary to repeat it. However, “local officials are not currently encouraged or supported to find bonded labourers”.

I have a major gripe with this report. Why do the authors describe slavery as a “hidden crime”? At least in India that is not true. The country flaunts “the full spectrum of different forms of modern slavery, from severe forms of inter-generational bonded labour across various industries to the worst forms of child labour, commercial sexual exploitation and forced and servile marriage”.

From army of minors and women employed by the prospering middle classes as household slaves to children forced to beg in the streets, it’s all out there in the open. The only thing is we don’t call it slavery—or anything of the kind. That’s not our way.