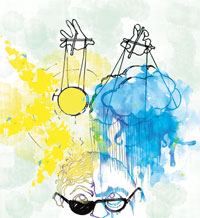 During my weekly conversation with my sister I told her about the unusual searing heat this June, the problems of power cuts and how we are coping in India. She, in turn, told me that in Washington DC, where she lives, there was a terrible storm that damaged her roof and uprooted trees in her garden. They were fortunate that they still had electricity, because most houses in the city were in the dark. She also said it was unbearably hot because the region was in the grip of an unprecedented heat wave. Both of us, living across the oceans, in different countries, with vastly different circumstances, were similarly placed.

Is this, then, what the future holds for us—a changing weather that has no boundaries or preferences. And why are we still so reluctant to make the connection between weather events and a changing climate?

This year, like most others, has seen unusual and extreme weather events. In Britain, where weather is always the subject of conversation, it became even more so. The Diamond Jubilee celebrations for the queen were an almost washout, while the Olympic torch’s journey through Britain has been hit by rain and storms. West Yorkshire has been flooded and its people evacuated (this is the third flood in a month). This time it has had one month’s rain in three hours. The country’s Met office says rainfall records have been broken. This June is the wettest since 1910. In Russia, flash floods have claimed the lives of 174 people. In Colorado, as I write, wildfires are ravaging land.

One swallow does not make a summer. But when unusual, extreme weather events begin to happen with increased intensity and frequency, they should make us ponder. In the US, for instance, 2000 heat records have been broken this year. The rate at which these extreme events are striking is not normal.

One may ask: how does the world measure the “increased” frequency of extreme weather? After all weather is always variable. Meteorological departments across the world keep records of changing weather events and patterns. Their records can point out similar events in the past when there was a similar cloudburst or frost or cyclone or freak snow. How does all this add to climate change? The fact is change will happen in our present and our future. Since the world is only now beginning to see the impacts of rising temperature, data over several years does not exist to establish a trend in extreme weather events. Science, at best, can use a model to predict impacts of global temperature rise on climate.

Then there is the next set of questions. Even if extreme events are now being seen and recorded, how does one know this relates to human-made emissions? All this is further complicated by the fact that multiple factors affect weather and another set of multiple factors affects its severity and impact. In other words, the causes of devastation following extreme events—like droughts or floods—are often complicated and involve mismanagement of resources and poor planning.

For instance, we know floods—currently ravaging parts of Assam and Bihar—are caused by unusually high rainfall. But it is also clear we have destroyed drainage in floodplains through utter mismanagement. We built embankments believing we can control the river only to find the protection broken. Worse, we built habitations in floodplains.

This complication hurts people but helps climate deniers. They have a field day saying there is no link between variations in weather and climate change. For instance, when Washington DC, which is burning in heat today, had an equally extreme winter this year, a Republican senator known for his strong views against climate change built an igloo in a shopping mall. This was to mock climate change believers because it was cold, not hot. He could not read the signs. And he is not alone. US media has been squeamish about making the connection between extreme weather events and climate change. It is difficult to say whether this is because the climate skeptics have got to them, or because they are unable to unravel the nuances of scientific messages.

Climate scientists like Myles Allen of University of Oxford in Britain will tell you that the world must begin to differentiate between externally driven changes in climate (or human-induced climate change) and specific weather events. In 2000, Allen’s home was flooded when waters inundated many parts of England and Wales. In 2011, he published a report, which quantified the role of human-induced climate change and concluded that it had doubled the likelihood of floods in the UK. There is more evidence now that the events of today, are confirming the predictions of models.

We know then that human influence has loaded the weather dice to make a particular event more likely. The deck is stacked against us. We will see more impacts of a changing climate in extreme, variable and devastating weather events. Science is now certain. Why are we still hedging our bets?