Whale of a problem 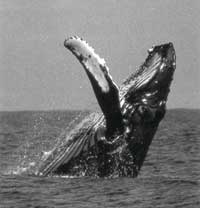 to whale or not to whale -- that is the question. And who should decide but the hoary International Whaling Commission (iwc), set up 50 years ago to manage the oceans' whale resources so that the impressive sea mammals do not become extinct with across-the-board effect on the world's maritime ecosystem. But the iwc itself seems to be in some trouble. Some of its leading lights pull in different directions on the main issue -- the fight between the pro-whalers (notably Japan and Norway), and anti-whalers (the "Anglo-Saxon tribe" of the us, uk and some others) is not new. It came into sharp focus at the fiftieth annual meeting of the iwc in Muscat last May.

When indiscriminate whaling pushed some whale species to the brink, the iwc decided in 1985 to place a moratorium on whaling. But Japan and Norway, the world's biggest whalers, have always managed to get around the ban. To defend its whale-hunting, Japan would often cite the requirements of scientific inquiry as a reason. Even when the moratorium was imposed 13 years ago, whaling was permitted under two categories: science, and needs of certain coastal communities whose survival has traditionally depended on catching the big sea mammal.

At Muscat, the main point on the agenda was to discuss the Revised Management Scheme (rms). The iwc was doing its best to prevent allotment of quotas while whale-hunting countries were doing their best to somehow put an end to the moratorium. But the anti-whalers made sure the main agenda was overturned. This was done by raising procedural hurdles.

The rms of the iwc came in handy for anti-whalers. They prevailed when they held that whaling quotas could not be allowed until all aspects of the rms were cleared and implemented. These include close monitoring of all whaling by placing additional observers on whaling vessels, regulating whaling even by communities with a long tradition of such activities, and prohibition of trade in whale products. Thus, for now, pro-whalers have been thwarted.

Japan and Norway are quick to challenge the classification of whales as endangered creatures. At the meeting of the Convention of International Trade in Endangered Species (cites) last year, they had lobbied to get three whale species off the endangered list. These are the Minke whale, the Byrde's whale and the Grey whale. Using figures of the iwc Scientific Committee, Japan maintained that these species of whales were found in abundance. But the proposal was rejected. It was said that one species of whale was difficult to distinguish from another in the absence of dna testing facilities!

Though Japan has not so far been able to bend the iwc and get the whaling ban lifted, its undoubted economic clout is thought to sway votes in iwc sessions in favour of pro-whalers by dangling before the poorer members prospects of increased Overseas Development Assistance (oda).The second day of the Muscat meeting was marred when the International Wildlife Coalition, an ngo , submitted a letter accusing Tokyo of winning over some Caribbean votes at forums such as the iwc and cites . The letter was signed by 42 ngos, including the Worldwide Fund for Nature and Greenpeace International. "We respectfully urge all small island nations to collectively reject the Japanese practice of linking foreign aid to unqualified support for their actions at international treaty deliberations", the letter said.

Pro-whalers are clearly not amused by goings-on at the iwc . As Rune Frovik, the Norwegian secretary of the High North Alliance noted after Muscat, "The iwc is stone dead as a management regime. The iwc meeting this year was just the same as last year -- nothing of substance was decided."