What Durban did not discuss

IPRs are blocking access to mitigation and adaptation technologies. India offers a way out 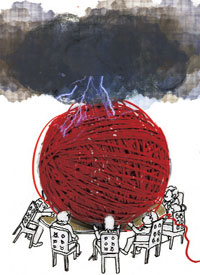 Debate on the rights and wrongs of intellectual property rights (IPRs) always gets stuck on a fundamental question. Would there be any incentive to invent and create without the incentive of IPRs such as patents and copyright? The conventional view is that without the reward of IPRs there would be no investment in researching and developing new technology. The counterview is that IPRs create a barrier to access and actually stifle innovation.

It is a deeply divisive issue that has been resonating across the world in the past 15 years in the context of medicines where access on account of their high prices is a paramount concern. Patents, say critics of IPRs, deprive poor countries of badly needed drugs. A similar discord is building up on the role of IPRs in climate change technologies. This would explain why negotiators at the various conference of parties (CoP) to the UN Framework Convention on Climate Change (UNFCC) have preferred to skirt the issue. In Durban, too, there was silence on this subject.

The silence is dismaying. The development and diffusion of clean technology is a critical component of the strategy to meet climate change challenges, a principle that is articulated in Article 4.5 of UNFCC. This requires developed countries to “take all practicable steps to promote, facilitate and finance, as appropriate, the transfer of, or access to environmentally sound technologies and knowhow to other Parties, particularly developing country parties to enable them to implement the provisions of the Convention”.

In 2007, the Bali Action Plan, agreed to at the 13th CoP, restated the importance of tech transfer. That plan called for increased action on tech transfer to support action on mitigation and adaptation. In Cancun, there was some movement on the vexed question when CoP 16 decided to establish a Technology Mechanism. However, it left many important questions, such as how the mechanism relates to the financial mechanism to be resolved at Durban. So, too, the matter of how the two components of the mechanism, the technology executive committee and the Climate Technology Centre and Network, will relate to each other. Durban did not do so. It discussed how to operationalise the Green Climate Fund, some countries have pledged funds, and set up a new mechanism and adaptation committee that will coordinate efforts towards adaptation.

Interestingly, India has submitted a proposal to foster a “constructive” discussion on what it terms the important issue of accelerated access to critical mitigation and adaptation technologies and related IPRs. It is the first country to have taken on this issue, and one can only conjecture why it has done so. Was it the fact that it has been the hub and target of the fight between generic drug producers and innovator pharma firms in the past decade and a half? Perhaps.

Here’s how it posits the debate: climate justice in India’s view means “a fair, equitable and transparent global regime for technology transfers”. But it is careful to strike a reasonable stance. Noting that most of the technologies that would help developing countries achieve a lower carbon growth are out of reach due to IPRs and prohibitive costs, it says “India firmly supports a facilitative IPRs regime that balances rewards for the innovators with the common good of humankind… In the absence of such a facilitative IPRs regime the objective of advancing nationally appropriate mitigation and adaptation actions at the scale and speed warranted by the Convention will not be achievable.”

What it suggests is a facilitative IPRs regime that must form the cornerstone of a programme to advance global action on climate change. If the negotiations on the Bali roadmap “remain immature or unbalanced across the two tracks, emerging understandings on a facilitative IPRs must be reflected in the operational provisions of intervening CoP decision texts”. In other words, parties should identify another forum and process to address these issues to ensure that they remain on the agenda.

Among the options it suggests are: launching a process under the CoP or AWG-LCA, clearly tasking it with crafting a facilitative IPRs regime relating to critical mitigation and adaptation technologies, and identifying desired inputs, outcome and a time frame to reach it. AWG-LCA stands for Ad Hoc Working Group on Long-term Cooperative Action. It is a subsidiary body under the Bali Plan. It conducts a comprehensive process in order to reach an agreed outcome. India submitted its paper well in advance of Durban and it was circulated by UNFCC on October 7. There was no discussion. The impasse continues.