What is Aam Aadmi Party’s new deal on transport?

There are dangers in ignoring the demand for collective dignity on roads and in pandering to the arrogance of cars. Hope AAP will steer the change that Delhi needs

There are dangers in ignoring the demand for collective dignity on roads and in pandering to the arrogance of cars. Hope AAP will steer the change that Delhi needs 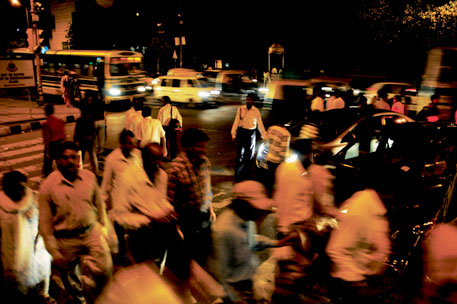 The newly elected Aam Aadmi Party’s (AAP) metro ride to Ramlila ground for the oath-taking ceremony and news of their youngest minister arriving in an auto rickshaw to the Delhi secretariat made us all sit up with great expectations. Their refusal to use security paraphernalia, including fuel-guzzling, road-grabbing car entourages, stoked our optimism further. Is Delhi finally politically ready for the lane change to fast track bus, cycle and walk for clean air, good health and liveability? Will this set the right principles for safe, clean, comfortable, and affordable travel for aam aadmi and aurat (common man and woman)?

The great experiment with participatory democracy that AAP hopes to reinvent is logically expected to challenge the orthodox transport planning as well. I thought their manifesto  was quite clear on their commitment to provide high quality public transport, secure last mile connectivity, and make pavements and cycle tracks and remove route restrictions on cycle rickshaws. But election speeches and promises in rich colonies of south Delhi or the post election media bytes are now emitting conflicting messages.

Media is awash with mixed messages from various conversations with the new political bosses. Smattering of quotes indicate that cycle is on their agenda but cycle tracks are dubbed as “impractical”; the idea of fast and uninterrupted lanes for buses that carry 40 per cent of the electorate is at risk of a roll back; that trashing of BRT for AAP is not about poor versus rich but their consideration for many “aam aadmis” who also use cars and two-wheelers. Roads and flyover construction will proceed as planned. What is lost in this din is the vision of sustainable mobility that AAP stands for.

But these are the early times and also the time of hope and fair chance. Therefore, we hope that AAP will get the rules of the transport game right early. This is not a matter of political choice but of political necessity and even political survival. The right mobility solutions are about protecting the rights of the commuting majority of the electorate whose mode of travel minimises harm.  We need a public conversation right now to know what is at stake and how to undo the mistakes of the past. If AAP’s new political experiment of getting mandate from the grassroots is pursued seriously and people are asked to voice their mobility needs in jan sabhas (people's councils) across Delhi, the silent commuting majority can change the course of transportation history in this country.

So what's at stake?

The day AAP took oath Delhi was already choking on one of the deadliest smog occurrences of the season, the toxic aftermath of explosive motorisation filling Delhi with millions of tail pipes spewing killer gases on our faces. At least one aam admi dies every hour due to air pollution-related diseases or gets injured in a road accident daily. AAP dons power just when the WHO puts air pollution in the same class of carcinogen as tobacco smoking; India’s own cancer registry shows rising incidence of lung cancer in Delhi and doctors warn of rising incidence among non-smokers. More evidences show lung impairment and other health damages among large number of children of Delhi where exposure to vehicular fume is among the highest in the world.

In this sick and ailing city where polluted air snuffs life out of both rich and the poor alike, AAP will have to tame motorisation to cut pollution, energy guzzling, and protect public spaces. This is a tough deal for any ruling government in Delhi to prepare itself to enable daily travel trips of over 25 million by 2020! How these teeming millions chose to travel will determine health and liveability of Delhi. Can AAP help Delhi to fulfill its master plan target of 80 per cent public transport ridership share by 2020?

AAP’s politics of public good and its rights-based approach to change cannot return to conservative politics of the past to serve the interest of the personal vehicle owners and road construction lobby.  Its jan sabhas across Delhi should have proven by now the strength of the invisible and silent commuting majority who still walk, cycle and use public transport and form the single largest vote bank. Cars account for only 14 per cent of the daily travel trips. RITES (Indian Railways' engineering consultancy company) survey has shown that there are still stretches in Delhi like Uttam Nagar and Subhash Nagar on Shivaji Marg, and Jyoti Nagar East etc on Loni Road where the numbers of cycle and cycle rickshaw outnumber cars.

Future challenge is about incentives for the majority to stay with sustainable modes and entice others back. The challenge is not to inconvenience the rich but make public transport convenient for all. Delhi’s rich will have to be rich enough to value their own health and quality of urban life to support aggressive measures on walk, cycle and public transport.

While the new government has to improve the glamour quotient of public transport and cycling to attract the rich of Delhi, it will also have to provide affordable travel options in a city where 63 per cent of the population can spend less than Rs 88 per day (as per NSSO data). A great many cannot afford Metro or even a bus. How will AAP make equity play out in this city? How AAP will be different from the past policy fetish of spending more than 80 per cent of the transport budget on road building and flyovers for thrill of speed of vehicles and not for mobility needs of masses—and fail in that too as congestion quickly saturates extra road space? Delhi’s 66 flyovers and signal free corridors have cut off walking, cycling access and public transport access; large number of localities are starved of reliable and frequent public transport services, and unsafe roads and crime compromise public transport usage.

One of the biggest expectations from AAP is that it will voice the concerns of the commuting majority, the silent majority. If the inconvenience of the loud car owners in posh south Delhi colonies is nudging AAP towards backtracking on the principle of dedicated road space for bus users, walkers and cyclists then they should also find out the level of satisfaction of the majority of bus users on that small BRT corridor. That will encourage them to fix the current glitches and also extend this to become a full fledged network of bus corridors to effectively link origin and destination of the majority commuters. It might help to know that more than 55 per cent of people who travel on Delhi’s BRT corridor use the bus and our surveys have shown that 88 per cent of them are “happy” about the bus speed and improved journey time on that corridor. How can the voice of the majority remain so muted in our democracy?

As AAP now shoulders the responsibility of modernising the bus fleet and improving quality of service, speed, efficiency, frequency, and reliability at affordable prices, it should take on board the Transport Demand Forecast of RITES in 2011 that Delhi can achieve 80 per cent public transport ridership share by 2020 only if 73 per cent of this share is provided by dedicated bus lanes. The new buses can also attract the rich if it is comfortable and fast.

Yet AAP wants to read the high court judgement on BRT once again to know the legality to decide the fate of the bus corridor. But AAP should know that new transportation governance challenge cannot be reduced to a narrow legal question without establishing the right principles first. This can create serious fault line and fissures, putting sustainability at risk. If AAP truly aims to bring in the model of local governance based on popular consent, such referendum will need guiding principles of equity, sustainability and empowerment of the commoners’ voice.

The same 2012 high court order to be brought under AAP’s scrutiny has been forthright on the principle of mobility, “it is the principal purpose of a government to promote the interest of the general public rather than to distribute public goods to restrictive private benefit. The issue is large: one of urban transport policy. A policy has to be evolved where people voluntarily switch over to public transport.” It is conclusive on BRT: “keeping in view the fact that road space cannot be augmented, there is no option other than to put into place a good public transport system, with BRT being an integral part thereof; for only then would the citizen of Delhi shift to public transport.”

The high court bench has likened the car boom in Delhi to the “population of herbivores in a forest going beyond the sustainable limits of the forest, requiring some kind of culling”. “And since in a democracy it is not possible to physically seize cars and destroy them, the only democratic solution would be to dedicate road space to buses, which would move quick and fast and this would act as an incentive for people,” the order further states.

Uphold the politics of common and inclusive good

AAP is at the cross roads, faced with a legacy of car culture that had shaped the politics of earlier state and municipal governments. They were buckling under pressure to give away green areas, parks and valuable urban land for parking; failed to make car owners pay the right price for using public spaces for parking personal vehicles –even hawkers pay more than car owners; or to stem the ugly greed to grab and cover the vital storm water drain network to build shops and car parks, disregarding the crucial role they play in recharging the rapidly dwindling ground water and flood management in the city. The clamour for more flyovers and signal free roads continued at the cost of the access needs of the masses; the revision of ongoing master plan to respond to the new transportation and environmental challenges faced opposition at every stage.

AAP will have to set the terms of change right. The bottom line is that AAP’s own political success is an evidence of awakening and a domino effect that has resulted in an unprecedented politics of public good galvanising the common persons to demand and vote for value-based politics. This success creates its own stake in protecting the community values. Sustainable mobility agenda is part of that paradigm. There are dangers in ignoring the demand for collective dignity on roads and in pandering to the arrogance of cars. Hope AAP will steer the change that Delhi needs.