What lurks beneath the Network

Social media is often the scapegoat for a real crisis

A series of buzzwords has become a naturalised part of discussions around digital social media—participation, collaboration, peer-2-peer and mobilisation. Especially in the post-Arab Spring world (and our own home-grown Anna Hazare spectacles), there is this increasing belief in the innate possibilities of social media as providing ways by which the world, as we know it, shall change for the better. Young people are getting on to the streets and demanding their rights to the future.

Citizens are mobilising themselves to overthrow authoritarian governments. Socio-economically disadvantaged people, who have always been an alternative to the mainstream, are finding ways of expressing themselves through collaborative practices. Older boundaries of nation, region and body are quickly collapsing as we all become avatars of our biological selves, occupying futures that were once available only to science fiction heroes.

To this list of very diverse phenomena, I want to add the recent tragic and alarming exodus of people of the north-eastern states from Bengaluru, where I live. There might not be many connections between this state of fear of safety which instigated thousands of people to leave Bengaluru, and the global spectacles of political change that I listed earlier. And yet, there is something about the digital networks, the social web and the ways in which they shape our information societies, that needs to be thought through. In the Arab Spring-like events, which are events of global spectacle, there is a certain imagination of digital technologies and its circuits that gets overturned.

These events challenge the idea that digital networks are always outward looking—connecting us to somebody and someplace “out there” in a world that is quickly getting flat—and show how these networks actually create new local and specific communities around information production, consumption and sharing. These networks that connect people in their information practices often make themselves simultaneously ubiquitous and invisible. So that the interfaces that we operate through—laptops, cellphones and other portable computing devices—become such a part of our everyday life that we stop noticing them. They are a natural element of our everyday mechanics of urban survival and, in their omnipresence, become invisible. 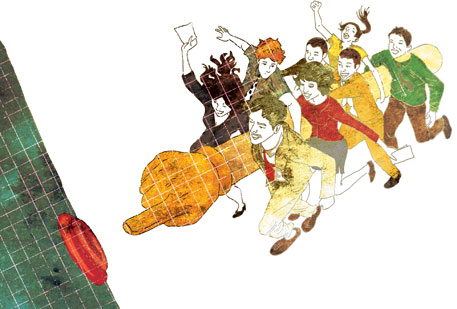 This invisibility or naturalisation of the digital technologies often makes us forget the intricate and inextricable way in which they are woven into our basic survival strategies. Especially with the younger generation that has “grown up digital”, the interface, the gadget and the network is the default space they turn to for their everyday needs. We develop intimate relationships with these technologised circuits, making them such a part of our quotidian existence that we often forget these technologies are external to us. Which is why we come across articulations like, “I love my computer because my friends live in it,” or “I feel amputated when you take away my cellphone”. These are ways in which we naturalise and internalise the digital technologies we live in and with. However, in times of crises, we suddenly realise the separation, as the technologies make themselves present, unable to sustain the new conditions of crises. It would be fruitful to see then that the eruption in our seamless connection with the digital technologies is a sign of an external crisis—something that we have seen in the Arab Spring or the Anna Hazare campaign. The emergence of networks into public view is a symptom that there is something that has gone wrong and so we see the separation of the digital ecosystem from its external reality and context.

The unexpected visibility of the network indicates that the regular information ecologies have been disrupted, the contexts which support community interaction at the local level have been changed, and those changes need to be accounted for and addressed in order for the network to become the transparent infrastructure of new urban communities again. In many ways, it resonates with the science fiction logic of the Matrix Trilogy where, if you can see the matrix, it means that something has gone wrong in the fabric of reality and it needs to be fixed.

The exodus of the north-eastern people also needs to be examined in this context. In an immigrant city like Bengaluru, the sense of belonging and community is often deeply mediated by the digital ecologies of information sharing. Beneath the veneer of a global city that is to connect with the external world, there is also a huge network of local, specific and invisible practices that do not become a part of the global spectacle of digital technologies, and operate in a condition of relative invisibility. However, when the logic of a migrant city gets disrupted because the conditions of its work force get threatened, these networks go into an overdrive. They become gossip and rumour mills. They become visible and suddenly create conditions of fear, danger and crisis that were unexpected. And so, without a warning, overnight, a huge number of people, who were a part of these networks, decided to abandon their lives and head home because the larger social, cultural and political threats transmitted through these local networks before they could become global spectacles that we could consume.

A large part of the people fleeing the city had already crowded the trains and left their lives behind before any attempt at regulation or control could be made. All kinds of post-facto theories about the real or perceived nature of the threat, the actual cases of violence, and the conditions of life in the IT City have emerged since then.

However, in all these theories is a recognition that the crisis which led to this phenomenon lingers on and cannot be addressed. There is no particular person to hold responsible. The few scattered incidents of attacks, violence or intimidation have been recognised as strategic and opportunistic interventions by local regressive groups. All in all, we have a condition where something drastic has happened and there is no real or material person or group of people who can be blamed. So, instead of addressing the crisis and the conditions which led to the exodus, we have committed an ellipsis, where we have made technology the scapegoat for our problems.

We have done this repeatedly in the history of technology and crises in India. In the early days, when the notorious Delhi Public School MMS clip that captured two underage students in sexual activity became visible, instead of addressing the problem at hand, we set up a committee to regulate the conditions of cultural production and distribution online.

During the horrifying bomb attacks in trains in Mumbai, we tried to block Blogspot and curtail information online as if technology was the reason these acts were made possible. Last year, information technology minister Kapil Sibal’s attempts at establishing a pre-censorship regime on information on the social web because he had encountered material disrespectful to Congress party leader Sonia Gandhi, sought to regulate the web rather than look at the political discontent and dissent that was being established through those articulations. Since there was no way by which the local situation could be controlled or contained, technology became the only site of regulation, inspiring draconian measures that limit the volume of text messaging and try and censor the web for lingering traces of the information mill that catalysed and facilitated this exodus.

This is a remarkable ellipsis where the actual problem—the conditions of life and safety in our global cities—is hidden under a perceived problem, which is the sudden visibility of a digital information ecosystem which was not apparent to us hitherto. And while there is no denying that at the level of tactics for immediate fire-fighting, this kind of regulation is important, nay, necessary, we also need to realise that at the level of strategy, these kind of knee-jerk regulatory mechanisms are not a resolution of the problem. These laws and attempts at censorship are neither going to correct what has happened, nor are they going to be potent enough to curb such networked information sharing in the future. However, we need to look beyond the visibility of this network and realise that the crisis is not its emergence or its functioning but something else that lurks behind the facade of the network.