When battered people took on the pesticide industry 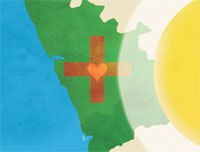 Today, I want to tell you a true story of extraordinary courage. The past week, I was in Kasaragod, a district in Kerala, splendid in beauty and with abundant natural resources, but destroyed by the toxic chemical, endosulfan. The pesticide was aerially sprayed over cashew plantations, for some 20 years, in complete disregard of the fact that there is no demarcation between plantations and human habitation in this area. It is also a high rainfall region and so, the sprayed pesticide leached into the ground and flowed downstream. The poison contaminated water, food and ultimately harmed human beings.

This story is known. But the personal battles that make up the story of this poisoned land and its diseased people are not known. More importantly, it is not asked where this story ends?

Leelakumari Amma is the original heroine of this plot. In early 1990s, she came to Kasaragod, ironically, as an agriculture scientist, whose job was to push farmers to use pesticides. Her brother died mysteriously while she was building her house. But she did not connect the dots and moved in, only to realise that the pesticide spray was poisoning her land and water. Fish she put in her well died. She could not open the windows of her house for days when the helicopter sprayed poison. It seemed a thick cloud was hanging over her house. She could not breathe and worried about her children. Then she noticed that many people living close to her seemed diseased— children were born with deformities and severe neurological problems afflicted people.

Leelakumari Amma petitioned for help. But received threats from the Plantation Corporation of Kerala (PCK)—the public sector company, which owned the cashew lands. In 1998, she filed a case in the local court. The threats became more venomous. But she did not give up. In 2000, the court ordered an interim ban on spraying. Some months later, the vehicle she was travelling in was hit by a truck. Leelakumari Amma lost a leg. She told me that this was an accident. Maybe, but then maybe not.

About this time, Mohana Kumar, a doctor practicing in a neighbouring village, wrote to the medical fraternity about the incidences of abnormality and deformities, but got nowhere. Shree Padre, a freelance journalist of the area, also decided to write explaining the plight of people. His email reached Anil Agarwal, director of the Centre for Science and Environment (CSE), who decided in mid-2000, to send a team to investigate and collect water, soil and blood samples. The results showed high levels of endosulfan—proving what was only suspected till then. The question, still, was what this meant for human health?

The pesticide industry hit back. It first hired a laboratory to ‘clean up’ the results. When this failed, it decided to hurt the storytellers. Mohana Kumar was served legal notices—so many he cannot even count. But hope was not dead. In 2001, the National Human Rights Commission intervened and asked the Indian Council of Medical Research for a detailed report. Scientists from the Ahmedabad-based National Institute of Occupational Health (NIOH) analysed blood samples for pesticides and concluded there was significantly higher incidence of abnormalities and diseases in populations exposed to endosulfan as compared to the control population. Endosulfan's effect on humans was established.

This study was even more inconvenient to industry. The investigators were attacked and vilified. A case was filed against the key scientist, Aruna Dewan, the day she retired from government service. The Centre set up committee after committee, headed by ‘eminent’ scientists to debunk the CSE and NIOH reports. This was fought back, at considerable personal cost. Thanal, a Kerala-based NGO, plays a critical role in research and campaign against pesticide industry smear and smut. This battle has not been easy. Over the past 10 years, industry has made it a habit to attack all research and threaten all scientists.

As a result, it has taken over 15 years for the truth to be known. Currently, the Kerala government’s ban on endosulfan prevails. Last year, the Supreme Court banned manufacture and use of the pesticide in the country. The state has accepted the need to provide compensation to ‘endosulfan victims’. A part of the compensation money will be paid by the PCK. Liability has been established.

Much more remains to be done—from rehabilitating the living to providing specialised health care to the very ill. Also cleansing traces of endosulfan in Kasaragod's soil, and taking the district towards organic farming. The stigma of pesticide contamination has to be wiped clean.

This will happen. I am sure. In the Buds school—seven special schools for endosulfan victims opened by the district administration—I saw signs of hope. Some 27 children from Padre and Perle village are enrolled there. I saw their teacher hold their hands, teach them how to smile, as they counted and drew flowers. Their laughter filled the room. The physiotherapist told me he was working hard to make sure these special needs children could walk. A few steps today, maybe more tomorrow.