When laws make out laws 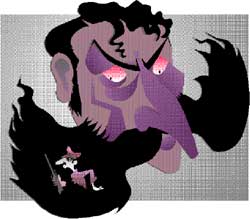 The article by Anil Agarwal is atrocious with heinous flavour and needs to be debated upon. We have umpteen number of officers who have served in such difficult areas where 'Veerappans' operate.

Anil Agarwal's article is not at all a responsible statement. He has himself quoted how many forest officers have laid down their lives while fighting such forces in parts of the Western Ghats. I know what tremendous efforts the staff and officials of three different states are making. It is easy to make sweeping statements, the field realities are very different. It would have been better, if instead of raising a voice without any sound logic, these energies would have been utilised for looking into the real problem.

Articles such as these from Anil Agarwal are not uncommon and regularly appear because any one of us hardly responds to such ill-informed appearances. Even when some of us do respond to the unfounded and biased press reports, the 'fourth estate' is seldom forthcoming in publishing the other viewpoint. I recall a venomous appearance in 'Down To Earth' spewing unfounded allegations against wildlife managers . V B Sawarkar, from the Wildlife Institute of India, gave a balanced and cogent response to it and requested the editor of the magazine to publish it. Several months have passed and the response has not seen the light of the day. ( The letter was never received while a number of critical letters were published in Vol 9, no 2, June 15, 2000/ editor )

I would like to make a few points to show how such exalted personalities build their image by making scapegoats of foresters. I must add that the foresters are extremely popular with such 'rabid human rightists' and 'fighters for environment' because they come in handy as 'whipping boys' In the following paragraphs I would like to take on Anil Agarwal's phoney logic.
Agarwal ( aa) would have us believe that because the state nationalised the sandalwood trees, Veerappan turned into a forest brigand. He underplays some facts and colourfully highlights some others to buttress his biased viewpoint. He does not analyse the fact that difficulties of livelihood faced by a 'development refugee' family was the main reason for Veerappan to turn to pillaging public property. The easiest target was the open forest and wildlife treasures. The second fact that aa does not like to heed is that sandalwood trees have had the state tree status even from the times of the erstwhile princely state of Mysore, So 'nationalisation' is not the doing of the foresters. If nationalisation of sandalwood were to be the primary cause Veerappan would have taken to pillaging sandalwood and not ivory in the first place.

Another fact that I would like to place against aa 's logic is that many districts in Madhya Pradesh, particularly in the malwa region, had sandalwood trees in forests as well as on the private holdings. The trade of sandalwood trees was not controlled by statecraft in the erstwhile princely states of Holkars of Indore and Scindias of Gwalior. Yet the trees had become rare in the 1940s and nearly disappeared in the 1950s, thanks to the oil industry in Kannauj and Ujjain.

Why cant intellectuals be forthright in accepting that it is difficult to completely prevent the loss of open forest property? The participatory forestry initiatives' effectiveness against traffickers in valued commodities like ivory, sandalwood and lately tiger bones is, to say the least, questionable. Transferring property in forests to local people is equally no panacea. Where big money is involved, any system, which is not supported by tough law enforcement has little chance. In the case of Veerappan, the Special task Force even after a decade has been ineffective. But aa has no word for or against the force's performance.


It needs a different hard core criminal mettle to run the sandalwood mafia which is what Veerappan is doing. His recent joining of hands with extremists is a logical step in that progression. Gun-running and drug trafficking are bound to begin soon if not already taken to. It is therefore, a despicable travesty that intellectuals like aa should take to turning these nefarious operations into a 'noble cause' and glorify hardened criminals, for the dubious benefit of finding yet another concocted reason to malign the forest and wildlife management . The role of big money, political patronage and dubious role of even the so-called Special Task Force has been given a clean chit by aa . Why? The supreme sacrifice of late Srinivas, ifs, who was eliminated by vested interests at a point in when he had almost succeeded in securing the surrender of Veerappan has not even been given a passing reference. Such are the ways of myopic vision, compounded by jaundiced thinking. It is not in my pen to defend corrupt foresters. Other government agencies, non-governmental organisations and non-governmental individuals are no exception to this.And the writing itself, to which I respond, is a classic example of intellectual expediency. Again, it is not in my pen to guess on the ulterior motive for such writing .


It is undeniable that most of the forest dwelling people are impoverished. But there are numerous reasons for it such as commercialisation of a large variety of forest produce and the inability of the state system to forego revenue from the forest in favour of the underprivileged or to invest this money in their welfare. An essential strategy change that needs to come is that rural development in the forested and other non-forest natural regions must be in ecological consonance with forest and wildlife conservation. Also, the forest and wildlife conservation must be alive to the needs of accommodating genuine concerns of local people and work in tandem with them at the field level.


Again aa is dubiously oversimplistic in alleging that the destruction of forests in Bastar took place because teak trees were nationalised in Bastar. In fact, nationalisation of the teak trade was introduced in Madhya Pradesh in 1970. This eventually led to the elimination of the contractor's role in the sale of timber from government forests. All timber operations in government forests are now done by the forest corporation and surplus timber after meeting local demand is brought to government depots from where it is sold by public auction. Because trade in teak timber is nationalised any timber harvest from private holdings in any part of the state has to be brought to the government depot from where it is sold. After deduction of actuals and supervision charges, all proceeds are remitted to the lot owner. It is notable that the permission for harvesting timber from private holdings must be taken from the district magistrate. As for the example of Bastar cited by aa , this refers to an initiative taken by the state government way back in 1950s when it was found that unscrupulous contractors were swindling the illiterate tribal farmers who had large holdings with majestic stands of teak and other timber. The measure involved demarcation of holdings and enumeration of trees by the revenue department. The forest staff estimated the value of trees at par with similar trees in government forests. Contractors were obliged to pay the estimated sum to the farmers in the presence of the revenue department officials. Subsequently, thery were made to pay the money into the specially opened bank accounts of the farmers. into the owners' specially created bank account by account apyee cheques. Even the withdrawal of money from these accounts was later subjected to clearance from the collector. Rupees worth several crores were paid to the farmers. Yet, today most of them are perhaps poorer than what they were before. The practice also led to illegal felling in government forests and to a lesser extent in the reserved forests, under the supervision of the revenue department.

So long as the ngo s resort to the simplistic practice of blaming forest and wildlife management, things at the field level may not improve much. ngo s and forest officials to come together and create a synergy. Only then will the cause of conservation be benefitted and people's welfare be ensured. There are many foresters who can acheive this dual target if they are provided an amenable ambience to work in . But, biased criticism such as that manifest in this and other writings of aa can only push the constructive potential synergy under a tight lid, a situation where everyone comes out a loser.

While fully endorsing Panwar's views, I believe a forester must come out of his or her cocoon and emerge as a well read and reasoned individual, steeped in strong technical groundings and a skilled communicator. Else, the ngo- wallahs will rule the roost with their half truths and sometimes even motivated lies ( aa' s article is just a sample). I say this with complete knowledge of both sides of the story. Media will not ignore you if they know you can make a good copy of it. And not everybody is out for sensationalism!

I have read the contents of Misra and Pawar's letters and I agree with them. But the real issue is the fact that the foresters are fast losing relevance and have been outwitted in their own field . We, ourselves, are to blame. A complete lack of professionalism is evident all over. Mediocrity is promoted deliberately with the result that we find few articulate foresters. We do not stand firm on professional matters. 'Phoney foresters' have made it seem that forestry is a simple task and anybody can do it. We have also contributed to dividing forestry into too many sub-divisions in the name of specialisation . . Whatat we lack in fact are true complete foresters who are good habitat or ecosystem managers. This has resulted in diminished value of foresters in the eyes of politicians and others.

Whether Veerappan is the result of forest laws or not, the plight of our wildlife, especially outside protected areas, is certainly the result of our policies. These animals feed on the crops and the government neither helps control the animal population nor pays any compensation to the suffering farmers. Recently, some states have permitted killing of neelgai damaging crops but have ensured the orders cannot be implemented. I am veering round to the view that unless we manage our wildlife as a resource, rather than as a liability, conservation will not make any headway. Wild animals are like any other forest produce. If animals are managed as a resource, people may want to have more animals around their villages.

Paul Varghese
Particpant in the discussion

If poaching is a problem, why cannot the forest officials trap or tranquillise the male elephants and then saw off the tusks. There are no nerve endings in the tusks.

Anupam
Particpant in the discussion

This is a wildlife managemnet practice followed in some African nations. The tusks and rhinoceros horns are sawed off in order to protect the animal from poachers.

Meenal Dighe
Particpant in the discussion

The idea is as abhorrent as poaching itself. Instead, genuine attempts should be made to create public opnion against poaching.

Some of the comments are excerpted from a web-based discussion