When the birds come home

A symbiosis between bird and man provides a welcome winter home for the blacknecked crane, rediscovered in India after four decades 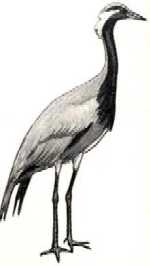 A HANDFUL of people gathered together on a cold wintry evening in a remote Himalayan village in Arunachal Pradesh, seeking to conserve the only winter habitat of the blacknecked crane in India. They included two village elders, the headmaster and a teacher of a village school and the deputy director of a sheep breeding farm in the valley. I was present there as a coordinator and a student of the blacknecked cranes that visit the Sangti valley every winter.

We were soon joined by a retired admiral, a representative of the armed forces and a keen wildlife lover. The valley where we met lay on the sensitive border region between India and China, where the presence of the gun-toting community matters a great deal. Their cooperation is necessary for the task we faced -- protecting the blacknecked cranes and their habitat in the valley.

As the coordinator, I explained the background to those assembled. In the '80s, I was studying blacknecked cranes wintering in Bhutan, which, as the crane flies, is not very far to the west from the Apa Tani valley in Arunachal Pradesh, where most of these cranes used to winter in the '50s.


Contrary to reports, I did not believe that the whole Apa Tani crane flock was exterminated. Although a few were killed, the rest must had shifted to some other suitable valley. I began a search for them.

My studies revealed that the cranes wintered in wide, open valleys and foraged in marshes and agricultural fields, picking grains left over from the harvest. They roosted in the shallow waters in the marshes or on little, sandy islands in the rushing Himalayan streams. I therefore looked for a wide, open valley with marshy low-lands bordering a stream.

On February 15, 1990, as our jeep trundled along a dirt track, a broad valley suddenly opened before us as we rounded a sharp corner. I realised that the valley offered all the features that I was looking for. And, sure enough, I soon spotted a couple of blacknecked cranes foraging quietly in harvested fields. A significant factor favouring the cranes was the Buddhist people of the valley, who regard them as auspicious and a good omen. The blacknecked crane was thus rediscovered on Indian soil after an interval of almost 40 years.

We continued our search through dense, evergreen forests, looked into low-lying valleys veiled behind moist fog and low clouds and scaled high-altitude valleys folded amidst snowy peaks. At the end of our travels, we accepted the inevitable -- the Sangti valley is the only wintering place for blacknecked cranes in India.


After I had recounted the voyage of rediscovery, it was the turn of the headmaster, who had been observing the cranes in my absence. He narrated how he encouraged the children to observe the cranes, their arrival and departure, their movements in the valley. The village elders noted that the cranes arrived every year after the harvest and never damaged the crops. They also maintained that if cranes did not come in a particular year, the crops would suffer the onslaught of insects.

Alarmingly, I had not seen a single crane in Sangti in '92. The teacher, however, asserted that 6 cranes did come to Sangti in November 1991 but left early because the blasting for road construction had frightened them off. He contended, "While we cannot stop roads being built, we can definitely stop the blasting as long as the cranes stay in the valley. And that is exactly what we did this year. I requested the construction people not to use dynamite and they agreed to postpone it till the cranes leave."

We then discussed the problem of deforestation. The low-lying wetland area in the valley was fed by seepage from the surrounding mountain slopes, which might run dry if the slopes are ever denuded of tree cover. I had seen villagers cut down trees on these slopes and decided to raise this issue. "The entire village depends on the wood from these mountains. It is difficult to stop cutting trees," the village elders said. "But at least we can start planting trees immediately," the headmaster rejoined, "We should impress upon the young the importance of preserving forests and planting trees." "We must also get the forest department to give us the saplings," the deputy director piped in.


I sensed some uneasiness in the two village elders and asked if they had anything particular troubling them. One voiced the fear: "What if the government decides to declare this area a sanctuary? They will fence the area, stop cultivation and ask the people to shift." Which is true. A wildlife sanctuary can only be legalised after the government takes possession of the designated land and resettles the people elsewhere. But if the people of Sangti are shifted, there will be no harvests and no fallen grains for the cranes to feed on. In Sangti, the traditional cultivating practice of keeping the lands fallow in winter seems to be linked to the appearance of the cranes.

The cranes and the humans complement each other. In sustaining ourselves, we indirectly offer the cranes sustenance. The cultivator is content to grow only one crop and then leave the fields to them. A few enlightened government officials have recognised this complementarity between wildlife and traditional societies and have warned nature lovers not to press for a sanctuary. The meeting, in fact, unanimously decided that a sanctuary is unnecessary for Sangti and its cranes. The people will protect the cranes for their own good. Sangti will be a people's sanctuary.

The deputy director undertook to liaise with other government departments and seek their cooperation to ensure that no dynamiting takes place during the sojourn of the cranes in the valley. The village elders, for their part, agreed to control the cutting of trees and to encourage their people to plant trees on the mountain slopes. The admiral said that the army would guard against poaching and promised to provide grains if case of shortage.

The meeting ended on a happy note and I was particularly glad to see the village elders going back home with a smile. That night I dreamed of a flock of cranes circling the sky, downing their landing gear and being welcomed by smiling children.

Prakash Gole is associated with the Ecological Society, Punea