When the water begins to stink

...Yet another rainforest disappears and a way of life dies as "development" catches up with the Guaranis of Paraguay 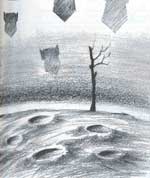 The Amazon drama all over again, but this time without the cameras: that's what has happened to the rainforests of Paraguay. A dense forest makes way for pastures and crop lands. A host of once sparkling rivers polluted during the United Nations' drinking water and sanitation decade (1981-90). Abundant rainfall but unsafe drinking water. An urban environmental organisation teaching indigenous communities about how to deal with the changing faces of the once-familiar ecosystem.

While there has been a global outcry over the destruction of the Amazonian rainforests, the even rarer subtropical rainforests of Paraguay, home to the Guaranis, has been largely wiped off the map in a matter of years, without any public protest. The eco-blitz, coordinated by long-time dictator Aflredo Stroessner and his cronies, was facilitated by financial support from the World Bank and the Inter-American Development Bank, and was carried out by European and Brazilian transnationals.

Familiar actors, playing in a familiar scenario, without the world paying much attention. Before the advent of the Europeans, the Paraguayan rainforest measured 1.5-million sq km, almost half the size of India. It was inhabited by one indigenous people, the Guaranis. But after going through the mill of colonisation and de-colonisation, the forest ended up being divided between Brazil, which got the larger chunk, and Paraguay.

Up to 20 years ago, the Guaranis of eastern Paraguay lived in much the same way as their ancestors. The forest was lush and catered to all their needs. With an annual rainfall of nearly 2,000 mm, water was always there -- clear, clean and bountiful. What the Guaranis didn't know was that a century ago, around 1870, the land they lived on had been "legally" bought by people who had never ever trodden on it.

In the '50s, the Guaranis got a foretaste of things to come. Although they did not know precisely what, they could tell that something was wrong with the water of the Parana, the main river of the region. The Guaranis are extremely sensitive to the quality of the environment. Speaking in urban terms, you can compare them to regular car drivers, who would notice at once if there's something strange about the sound of the engine.

What the forest-people's keen senses perceived were pesticides and fertilisers that had seeped into the upstream, Brazilian part of the Parana. The forest in Brazil was fast making way for pastures and soya plantations. Eventually, only a couple of patches in the Sierra do Mar mountains, some 5 per cent of the original forest, would remain. The Guaranis barely paid any attention to the foul water since they mainly drew on smaller rivers and brooks. Their Brazilian relatives, however, faced the breakdown of their communities through death and assimilation. A second sign of the lurking disaster was the road built in the '60s between the Paraguayan capital of Asuncion and the Brazilian border. The road caused some damage to the forest, but the peasants who settled there didn't cause much deforestation. They didn't have the wherewithal, and their customs made them respect the forest.

Events started speeding up in the late '70s when Brazil was getting too crowded for cattle raisers and soya growers. The Paraguayan landed gentry, allies of the dictator Stroessner, were perfectly willing, for "development's sake", to partition and sell the eastern forests to Brazilian and European agro companies.

Again, neither sellers nor buyers bothered to ask the Guaranis how they felt about it. The lands just changed hands. At about the same time, the World Bank and the Inter-American Development Bank financed a second road to cut through the forest, this time along the Parana. It was mainly due to the resultant activities that deforestation took place far more efficiently because many of the new owners could now deploy powerful machines.


The forest was destroyed in a very short time. The butchers didn't even bother to take advantage of the timber. They just burnt it down. Paraguay, a poor country of just 5 million people scattered over an area the size of Japan, couldn't have been able to build the road without external resources. The World Bank has been, therefore, a decisive factor in the destruction, although private companies were the ones who did the actual chopping. Working with a repressive regime didn't bother the Bank either: a whisper of protest against the regime would have shot their chances of doing much business in the Latin America of those days.

In just a few years, the region changed beyond recognition. Over 80 per cent of the forest cover was razed to the ground. Today, cattle graze and crops grow where the forest was just a few years ago. Water is still plentiful but rivers and the groundwater are seriously polluted by pesticides. Fish stocks have dwindled. Erosion has turned the crystal-clear rivers turbid.

What happened to the local Guaranis can be compared to the far more publicised plight of the Penan of Kalimantan, Malaysia. Yesterday, they were in their forest, the very base of their cultural, social and economic life. Today, they find themselves in a bare field. To them, it's like an earthquake or a bombardment. In military parlance, "You bombard the enemy to the Stone Age." In the case of the Guaranis it should read -- "They were bombed out of the present."


Today, the 60,000 Guaranis living in eastern Paraguay suffer from nervous and skin diseases, allergies and cancer brought about by the pollution. Unfortunately, no scientific research has been undertaken to prove this. But on the other hand, that's hardly necessary, since the causes and the effects are so obvious. Since most of the Guaranis' livelihood has been taken from them, they live in "impressive poverty". Landowners now even try to chase them out of the few remaining forests.

Part of the half-a-million immigrants in the region, especially the peasant settlers, are also being gradually affected by the pollution. The water from the small rivers, which dilute pesticides far less than large ones, is absolutely undrinkable now. It is even unsuitable for bathing. Unlike the 2 major cities of Paraguay, these people have no access to treated, piped water.

Even the big landowners have their worries. Erosion is forcing them to use more fertilisers, pushing up costs and aggravating their poor neighbours' problems in the process. Ironically, the World Bank has stepped in to help revive the most degraded soils. Meanwhile, Sobrevivencia (Survival), the Paraguayan branch of Friends of the Earth, helps the Guarani and peasant communities to stand up for their rights.

I admit that it's odd for an urban group to teach an indigenous people how to handle their natural resources. But the environment of the Guaranis has been totally transformed. Sobrevivencia and like-minded organisations are also pushing for a more responsible use of pesticides. But their pleas could keep falling on deaf ears for some time to come as several government officials have massive economic stakes in the import and distribution of agricultural chemicals.

Elias Diaz Pena is a member of Sobrevivencia (Survival), the Paraguayan branch of the Friends of the Earth (as told to Gaston Dorren of the Netherlands)