Mining in India has been in the news for all the wrong reasons lately. Our environmental track record in mining has not exactly been stellar. More bad news is likely. India is looking to open investment in gold mining in the country—and in a big way.

Geologically, India’s terrain, especially in Karnataka and Andhra Pradesh, is very similar to that in other parts of the world where there have been massive gold finds. India is estimated to have 20,000 tonnes of gold and diamond reserves spread over several states. The estimated gold ore reserves in Andhra Pradesh alone are pegged at 6.8 million tonnes.

Spiralling prices of this often volatile commodity and improved extraction technologies have suddenly made even previously uneconomical sites viable for gold mining. With the current market price for gold hovering around Rs 19,000 per 10 gramme, the breakeven point for a production rate of two tonnes of gold per annum is reportedly Rs 8,000 and Rs 14,000 per 10 gramme for open cast and underground mining. Many Indian and international mining companies are jumping into the fray. State governments could reportedly earn royalties of 20 per cent, perhaps more, from gold mining.

Even with the comparatively minuscule amounts of gold mining—the domestic production of gold is only about two tonnes per annum compared to Australia’s annual production of 280 tonnes— there is ample cause for concern. Respiratory ailments, soil and water contamination, thick blankets of dust and changes in land use pattern are common in urban areas surrounding fields.

Other grave social issues also exist. Dubbed by the large miners as illegal miners and by the UN as artisanal or small-scale miners, people from socially and economically marginalized communities turn to mining to escape acute poverty, unemployment and landlessness. In some cases, their homes and farms may be “acquired” for large-scale gold mining. Forced to eke out a bare livelihood, they resort to employing crude methods to separate any flecks of gold that may be there in the discarded waste rock (using mercury, a potent neurotoxin), thus slowly destroying themselves and the environment. 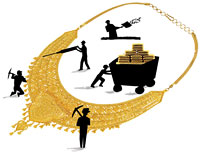 Small-scale gold mining is the second worst source of mercury pollution, after the burning of fossil fuels. There are 13-20 million small-scale miners in the world. These miners have been found to have mercury levels up to 50 times the WHO limits. India too has its share of such miners.

However, mercury and its compounds are “free” for import to India. While the conditions of its import—against a licence and only for the purpose of processing and reuse—are listed under the Hazardous Waste Rules, it is in effect a green signal for multinationals to use India as a dumping ground.

India’s record with the Environ - ment Impact Assessment (EIA) Noti - fication indicates we need to rethink the way we do business. A recent Kalpa - vriksh report, Calling the Bluff— Revealing the State of Monitoring and Compliance of Environmental Clearance Conditions, reveals that compliance and monitoring reports are not based on actual site verification, that the project authorities do not always report noncompliance in their reports, that regional offices often draft their monitoring reports to mimic the compliance reports that project authorities file, and that not all projects are even monitored.

Given such a state of affairs, it is not difficult to understand why environmental abuse is so rampant. Important questions related to mine closure—the lifespan of a gold mine could be 15-20 years—would also remain unacknowledged and unanswered.

So where does this lead us? Should we not mine for gold at all? Some will argue that there is always a price to pay for any kind of development. Besides, the “business case” is very strong. We must then grab the opportunity to learn from mistakes made in the past and become proactive. We have a whole series of examples of where things have gone wrong (and are still going wrong) from other countries. We need to use these insights to our advantage, and quickly.