Whose home is it, anyway? 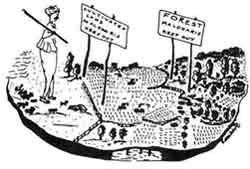 IN A CORNER of Gujarat lies the Gir national park, perhaps the last home in the wild for the Asiatic lion. The range of the park has shrunk progressively from vast stretches of Asia to its present, forest department-protected 1,200 sq km.

For thousands of years, the Maldharis and their cattle have co-existed with other inhabitants of Gir. Today, the Asiatic lion holds greater danger for them than ever before. Amid theories and arguments that their cattle overgrazing in Gir hastens the decline of the ecosystem, that they disturb the lions and so on, the Maldharis know for sure they are going to lose what has been their home and their way of life for ages.

If you visit a Maldhari settlement inside Gir, you will be welcomed with sugary tea, buttermilk, savouries and delightful Maldhari conversation while their women look on shyly. It might have been during just such a visit that an economist, sipping cold Maldhari buttermilk, hit upon the idea of evaluating the Maldhari economy.
The Maldharis makes their living basically from selling milk and milk products -- not much, but just about enough to make them comfortable. They have virtually no input costs -- the Maldharis' cattle eat grass from the forest, drink water from the forest and the Maldharis live on the forest land. A full-cost analysis will indicate the Maldhari economy is unsustainable and works only because no input costs are paid for. Therefore, economists would have us believe there is a case for throwing the Maldhari out.

It is true that on the basis of a full-cost analysis, the Maldhari is an economic criminal. The question is: Why single out the Maldharis? Are the Maldharis the only ones in this country who refuse to pay for inputs?

Up to a decade ago, anybody could pollute and get away with it. Today, we argue the polluter should pay. In other words, costs have been attached to spoiling the land, dirtying the air and polluting the water.

Society at large, or more precisely, the taxpayer, contributes to the education of our youth at universities and other institutions. Education, especially higher education, is highly subsidised. So, how does full-cost calculation apply to students who buzz off abroad after their stints at IITs? Vast numbers of IIT and IIM graduates migrate abroad or are otherwise lost to our economy. What happens to the input-output ratio?

There are no systems in the country to evaluate the full cost of this occurrence. However, when the Maldharis use free fodder, their milk is classified as uneconomic. How does one categorise Indian youth who use the taxes paid on match-boxes by rickshaw pullers to learn the art and science of engineering, medicine and management and then leave for the West?

Unlike Westerners, we pride ourselves on not throwing away torn umbrellas. Instead, we mend them. We do it because mending an umbrella costs a mere fraction of the cost of a new umbrella. This fractional cost is because the umbrella repairer has no "establishment" costs -- he encroaches on a pavement and does not pay rent. The same applies for a motor vehicle repair garage. The full cost of repairing a car would be much higher if one calculated the cost of accidents, low mileage due to vehicular congestion, subsequent pollution and cost of related disease treatment, disposal of waste and safety equipment.

We must accept the fact the Indian economy is able to operate at fractional costs due to various social, economic and cultural factors. The Asiatic lion undoubtedly is an element of nature we must preserve. The error perhaps lies in "using" an apparently "hard" economic technique to support a very fragile argument without any allowances.

Such errors are also made when exports are sought to be increased by importing "dirty" factories and technology, as also when state levies are decreased on cars instead of on bicycles. The Maldhari situation demands a solution, as do problems of inner-city deterioration, child labour, illiteracy, pollution and hunger.

The solutions can be found in the technologies of alternative energy, animal husbandry, education, empowerment and sustainable development. Eviction is a short-term approach that the undemocratic and powerful force on the politically weak in the garb of full-cost analysis. In an economy where the major constituents of the population are people who are marginalised, landless and illiterate, introducing a category of the dispossessed would be a cruel joke.