Tribal hunting rights vs wildlife protection laws: Is there a middle ground? 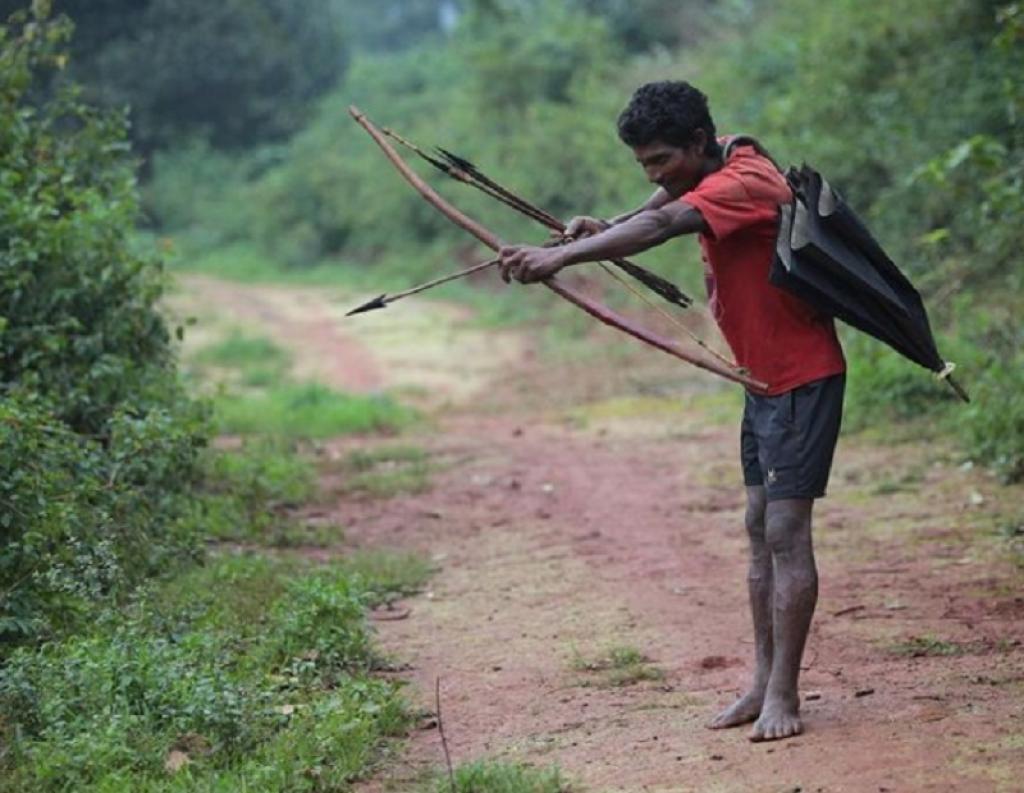 A Bonda tribesman in Odisha hunts with his bow and arrows. Photo: Vikas Choudhary / CSE

A recent news report published by Down to Earth revealed the killing of over 200 wild animals in West Bengal’s Junglemahal forest area by the local tribal population. The animals were killed as part of the centuries-old annual hunting season observed by Adivasis known as Shikar Utsav. There are two opposing views on the issue — while one part supports it as a traditional customary ritual of indigenous people, others oppose it in the name of wildlife conservation and animal rights.

Hunting has been a core part of human civilisation since the beginning. It became deeply embedded in human cultures along with agriculture, fishing and gathering. Some of the oldest cave paintings also depict scenes of hunting. Many of the Saharan Rock Art dating back to the Bubalus period between 10,000 BCE and 7,000 BCE, showcases several scenes of hunting and the relationship between humans and animals.

Moving ahead to the Middle Ages and the colonial period, hunting has been depicted in many paintings and later in photographs. In India, Mughal paintings often depicted kings going out for hunting tours. The Akbarnama has several scenes of Akbar’s hunting expeditions, often assisted by his pet cheetahs. It was a symbol of power.

The same was followed by the British colonial masters of India. On a single day on December 25, 1911 during the visit of King George V, 39 tigers, 18 rhinoceroses, four bears and a leopard were killed in the Terai region of the Indo-Nepal border. George Yule, a British civil servant, killed more than 400 tigers and Geoffrey Nightingale shot more than 300. Between 1875 and 1925, at least 50,000 tigers were slain in India according to estimates based on home department records.

Post-independence, the genuine need to protect India’s wildlife was realised and in 1952, the Indian Wildlife Board was constituted to centralise all rules and regulations relating to wildlife conservation in the country. One of the most landmark actions by the board was to accord the status of ‘Sanctuary’ / ‘National Park’ to the all erstwhile game reserves in the country.

In 1972, the stringent Wild Life (Protection) Act, 1972 was a major step towards wildlife conservation. The Act classified animals into different schedules based on the need for protection, and hunting of these species was outlawed and penalties were prescribed in case of violations. This legislation played a major role in protecting India’s rich wildlife. But on the other hand, it rendered traditional hunting rights practised by many tribal communities illegal.

To hunt or not

The traditional right to hunt wild animals has been recognised by many legal systems across the globe. Australian courts and legislatures have recognised the native title rights of Torres Strait Islanders and Aboriginal Australians and have included the drowning of dugongs, harpooning of turtles and even killing the turtles with strong blows to their heads.

Some of these rights also include breaking the necks of mutton-bird chicks. Cruel as it appears, these customary hunting activities have been exempted from Australia’s Animal Care and Protection Act of 2001.

However, when we deal with the Indian laws, we have a different scenario. Section 3(l) of The Scheduled Tribes & Other Traditional Forest Dwellers (Recognition of Forest Rights) Act, 2006 or Forest Rights Act (FRA) excludes the traditional right of hunting or trapping or extracting a part of the body of any species of wild animal. But the community right to hunt is prevalent in many tribal and traditional forest-dwelling communities.

The traditional community rights associated with hunting are not immune from the criticism that they draw from conservation perspectives. For several tribal and other traditional forest-dwelling communities, reliance on a property-based framework instead of a regulatory one is significant to enforce their community rights to wildlife and forest resources.

These communities cannot extend the horizon of their environmental prerogatives in a regulatory frame to attain the wide multitude of human-based and human-caused reasons for wildlife mortality. Many of these communities cannot even inertly rely on the legislative framework to protect and preserve their rights and interests in the regulatory frame. A wide range of existing literature on aboriginal forest and wildlife management will attest to this notion.

The native conservation servitude associated with wildlife in and around the protected areas draws its genesis way back to the long history of their existence. The native right to such natural wildlife capital is ingrained in their way of life. The FRA 2006, during its adoption, has ascertained these facets quite boldly and it was not pacifically accepted by conservationists too.

However, with changing times, laws and their interpretations have also opined and opened the corridors of balancing arrangements, where the conflicting native rights of such communities and concerns of forest and wildlife conservationists do collide to finally come to a settlement.

However, the question remains whether such customary practices associated with wildlife capital can be exercised without any affiliation of law. Some of the foreign judgments are of great relevance in this context.

In this case, the court found that there existed an easement to the traditional fishing sites and such easement operates as a servitude on the ceded property and private property owners may not interfere with the Indian use and enjoyment of it [198 US. 371 (1905), at p. 381-82].

Subsequently, in the United States, another landmark judgment on treaty rights held that the federal government may regulate treaty fishing rights in the interest of conservation, so long as the said regulation is reasonable and necessary as well as non-discriminatory against Native Americans [Puyallup Tribe v Washington Department of Fish and Game 391. US. 392 (1968)].

Furthermore, many such judgments (such as Sohappy v Smith, Washington v Washington State Commercial Passenger Fishing Vessel Association, etc) contributed to the evolution of treaty rights in the United States due to interpretation by the courts.

In India, we are yet to witness such magnitude of judicial interpretations in a matter pertaining to customary rights to hunt wildlife. But one cannot rule out the role of tribal trusteeship in wildlife, even its existence and relevance in the deep remote dense forests of India.

This is because they are an essential attribute of sovereignty as it deals with such species to which several such indigenous communities have property and usufructuary rights. From the face of our national legislation on wildlife protection and forest conservation, it is quite clear that such communities may not assert this trusteeship over wildlife capital.

But in a way, they retain certain significant aspects of their trusteeship towards forests and wildlife that are well-matched and compatible with their rights recognised by the law (such as the FRA).

However, one question looms: Is the State’s public trusteeship over such wildlife and forest resources subservient to such customary tribal rights which, although not codified, exists since time immemorial?

From several judgments on forest rights in India, we can establish that forest rights reflect correlative duties of such communities to preserve wildlife and it is in consonance to the fundamental duty under Article 51 A(g).

We have instances to show how some tribes have given up their customary hunting rights for the conservation of wildlife and environment, at large. The Angami tribe of Nagaland gave up their hunting rights, which was connected to their right to livelihood. The Nyishi tribe in Arunachal Pradesh, who once hunted hornbills and used their beaks to make headgears, are today successfully running a hornbill conservation movement.

It is a matter of time when we truly realise the essence of intra and inter-generational equity from its core and realise the value of wild species even over our folklore and avaricious desires.

Chiradeep Basak is an Assistant Professor of Law at National Law University and Judicial Academy, Assam. He specialises in Environmental Laws and International Human Rights Law

Abhishek Chakravarty is an Assistant Professor of Law at Sai University in Chennai. His interests lie in Environmental Laws and Rights of Indigenous People