Sharavathi is one of the most exploited rivers in India; it flows for 132 km, but 4 major power projects on it produce 40% of all hydroelectric power in Karnataka 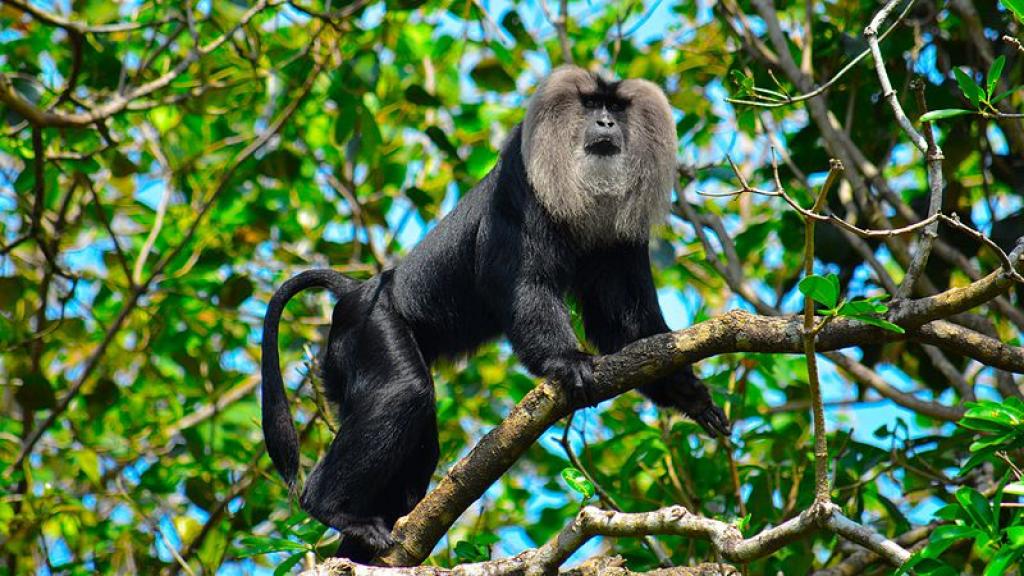 The Union government allowed a geo-technical investigation that involved drilling of 12 boreholes inside Sharavathi Valley Lion-tailed Macaque Sanctuary in the Western Ghats in Karnataka on 6 May 2020.

The blatant violation of Wildlife Protection Act, 1972 (WPA) is matched only by the all-around ignorance about an animal for whose protection this sanctuary was created for on 7 June 2019 — only 11 months earlier.

Endemic to rainforests of the Western Ghats, the Lion-tailed Macaque (Macaca Silenus) is an endangered species, according to International Union for Conservation of Nature assessment. it is listed in Appendix 1 of Convention on International Trade in Endangered Species.

It is a Schedule 1 species under WPA, 1972 and thereby, accorded the highest protection under the Indian law. Their total (global) population is 2,500 mature individuals. This is about the number of people that live in one village in a country having 640,867 villages.

A big country like India with a high population density of 400 people per square kilometre can justifiably pride itself for being the eighth most biodiverse country in the world. However, this could soon be a thing of the past even as neo-liberal economy with an inherent exploitative relation to its natural resources gets more deeply entrenched.

Abetting this rapacious model of “development” is country’s environmental governance that is in shambles and riddled with illegal processes to facilitate implementation of ecologically disastrous infrastructure projects.

In the backdrop of a contracting economy, the spate of environmental clearances given over the last decade have only increased.

The departments meant to protect country’s environment are obsessed with promoting “ease of business” with disregard to its mandate. Statutory bodies such as National and State Wildlife Boards are seriously compromised, with decisions taken under myopic economic compulsions and centralised polity usurping authority from domain experts.

In its 57th meeting on 7 April 2020, the standing committee of National Board for Wildlife (SC-NBWL) cleared 31 proposals with each of these projects appraised in 10 minutes of ‘video conference’ — even when most of them warranted site inspection.

The permission for geo-technical investigation inside Sharavati Valley lion-tailed Macaque Sanctuary also got a clearance in this meeting. Subsequently, chief wildlife warden of Karnataka issued an order permitting this survey on 6 May, 2020.

Sharavathi is likely one of the most exploited rivers. It flows for mere 132 km, but four major power projects on it produce 40 per cent of all hydroelectric power in Karnataka.

Yet, in an attempt to squeeze more power from the river flowing through the Western Ghats, a new pumped hydro-storage project has been proposed.

This will only intensify the cumulative adverse impact of previous projects on the biodiversity of Sharavathi valley. In particular, the inimical impacts on the iconic Lion-tailed Macaque are likely to be huge.

Lion-tailed macaques are found as 47 isolated subpopulations across rainforests in Western Ghats of Karnataka, Tamil Nadu and Kerala. Most of these subpopulations became isolated recently, largely due to human disturbances and habitat loss.

These subpopulations are vulnerable because they are isolated. Thus, maintaining connectivity and not further fragmenting the species population in its distribution range is the recommended conservation strategy.

A single-largest subpopulation of lion-tailed macaque in its entire distributional range — with an estimated 32 groups and more than 750 individuals was reported in 2004. This viable subpopulation from Sirsi-Honnavara (north of the proposed project) occupies habitat that is relatively undisturbed.

However, this subpopulation is now isolated because historically recorded northernmost populations from Anshi — evergreen forests of Maharashtra and Goa — are extirpated. To the south, the heavily disturbed Sharavathi Valley with a series of reservoirs, hydroelectric projects and roads block any possible dispersal of individuals.

In relatively low-resource forests such as Sharavathi, lion-tailed macaques are likely to have bigger home ranges. This is because they primarily eat fruit, and fruit trees are sporadically distributed naturally. Drastic reduction of suitable habitat due to projects such as the proposed may even result in LTMs going locally extinct.

A 2019 study discussing the long-term conservation of lion-tailed macaque stated “[they] are endangered as a result of the fragmentation of their habitats and low population growth,” and recommended “improving the quality of their degraded habitats, and the linking of forest fragments with native vegetation.”

IUCN assessments since 1986 (except for one) have categorised lion-tailed macaque as endangered, reported decreasing population trend and listed habitat loss through forest fragmentation and degradation as main threat to the species.

There is a need to shift the way energy is produced and consumed in the backdrop of the impending climate crisis induced by biodiversity loss. Touted as ‘renewables’, pumped hydro-storage systems are not consistent with these goals.

The proposal for wildlife clearance, however, identifies 877.507 hectares of forestland inside Sharavathi Lion-tailed Macaque Sanctuary to prospect for 153 ha of project area where new tunnels and powerhouse can be constructed.

Estimated project cost as of 2017 was Rs 4862.89 crore. The design is to store energy in water at the elevated Talakalale reservoir by pumping water from the lower Gerusoppa reservoir when demand on the grid for power is low.

Then, with peaking demand, water from the upper reservoir is released to run turbines and generate power. The pre-feasibility report states that for peaking daily operation of six hours, the underground pumped-storage hydroelectric plant can produce 12,000 MW per hour electricity, but will consume 14,833 MWh, which is 80.9 per cent efficiency.

PHSS are net energy consumers that report a typical 20-30 per cent electricity loss. However, these losses are recovered by selling electricity at higher prices during peak demand and utilising electricity during an off-peak time of the day when prices are low. 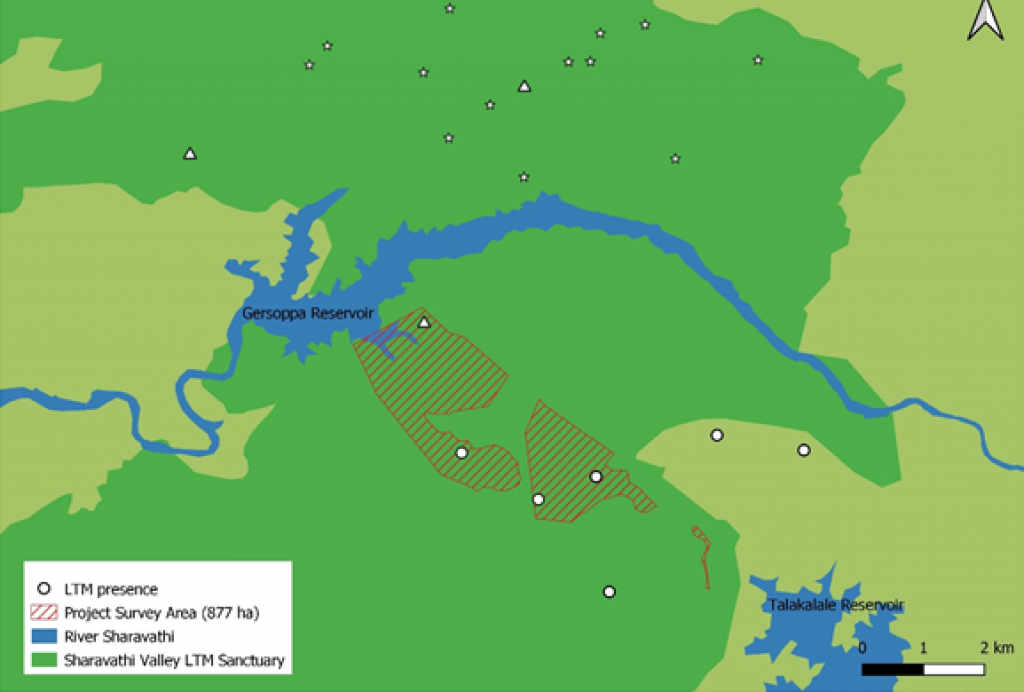 A map of LTM sightings. Lion-tailed Macaques is a cryptic species and their detections are difficult. In addition, they naturally occur in low densities. Records show the presence of LTM in proposed project area.

Among the available technological alternatives for storing power, the PHSS score better on the storage capacity and life of the plant. But sites for PHSS generally tend to be in hilly landscapes and come at a great environmental cost. This will also be the scenario for the proposed Sharavathi PSP.

The existing pumped-hydro storage projects are not economically viable projects in a grid where there is no higher price for peaking hour power consumption.

Currently, there is no attempt to manage the peak power demand, optimisation of peak-hour power generation from hydro- projects; the existing pumped hydro storage projects are not operating to their capacity either.

The fast-reducing cost of alternative energy storage systems makes them even less viable, particularly when they come at the cost of ecological resources that are important to manage climate change impacts.

Lithium batteries with much higher efficiency of 90-100 per cent are emerging alternatives. They have higher energy density and faster response time. They can be easily installed at sites where consumers are also energy producers, for example in combination with rooftop solar power generation.

This flexibility for decentralised deployment of Battery Energy Storage Systems (BESS) more than compensates for their lower storage capacity and do not require setting the plant at ecologically sensitive sites.

In February 2020, the Ministry of New and Renewable Energy auctioned 900 MW and 300 MW projects for PHSS and BESS respectively. The quoted average tariff for BESS is 6.4 per cent more than PHSS. This is seen as highly encouraging because the cost of battery storage is expected to reduce to the tune of 15-20 per cent by 2021.

Hence, it does not make sense to invest Rs 5,000 crore in a hydro-storage system that comes with a huge ecological cost when more environment-friendly energy systems are available.

Biodiversity is a shield against pandemics

Notwithstanding the damaging impact on environment as well as the availability of promising alternatives towards ‘greener’ energy storage solutions, the cause of proposed Sharavathi Pumped Storage Project is pursed.

A PIL filed in Karnataka High Court alleged that the processes of seeking permission and granting permission for the survey and geotechnical investigation towards this project was fraught with illegality — with violations ranging from the procedural to the constitutional.

Section 29 of the WPA, 1972, requires that only work which is “necessary for the improvement and better management of wildlife” should be allowed inside the sanctuary.

Clearly, this project does not benefit wildlife in any manner. The PIL alleged that a survey for a project that will itself be disallowed by law should be disallowed.

The novel coronavirus disease (COVID-19) pandemic is a public health crisis only by manifestation; it is a global environmental disaster largely caused by loss of bio-diversity.

In the face of this global crisis that has brought most economies to heel, it would be reckless to pursue large infrastructure projects and technologies destructive to the environment.

Biodiversity conservation is the only meaningful strategy to guarantee long-term well-being of people against any future health crisis.