‘Man’s best friend’ has become a big threat for the charismatic cat in Ladakh, as this account shows 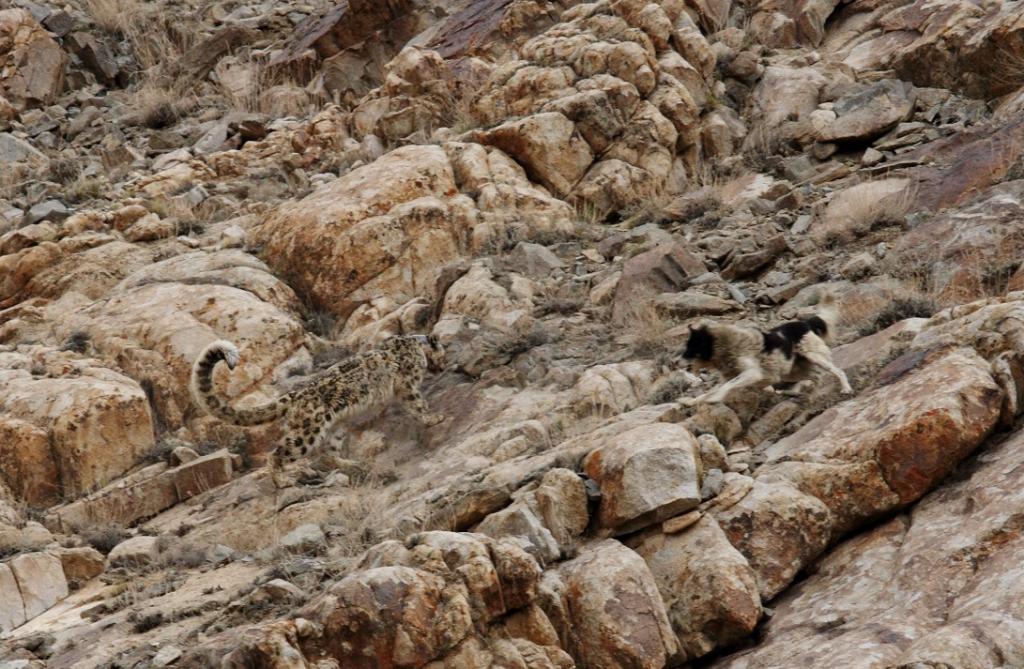 A snow leopard squares off against a feral dog at Saboo Phu near Leh. Photo: Narendra Patil

The estimated age of the snow leopard on the day he was radio-collared was eight years. That is two-thirds into a snow leopard’s lifespan. This mature big cat held great promise in revealing secrets about his species.

Beyond what we know from adventure stories, mesmerising pictures and dramatic video footage, there is not much understanding of snow leopards’ ecology.

From Mongolia to the Himalayas and from Ladakh to the Tibetan Plateau, there is remarkable variation of landscape in snow leopard range.

Not much is known about their home range size and population densities. Rightly so, these apex predators go by the epithet of ‘ghost’ in the cold, arid mountains of Central Asia.

The spring season in Ladakh is short and trees come to life vigorously. Apricot and apple trees were in spring bloom and the fragrance of white flowers heralded the appearance of luscious fruits.

People, silhouetted against clear blue skies, were climbing onto tall, vertical poplars trees to prune them. The narrow fertile valleys of Ladakh were coming back to life. In the lower reaches of the Indus valley, tilling of the land had already begun. But, not yet in Saboo Phu, which was at an altitude of 3,800 metres and relatively colder.

Saboo Phu is the uppermost part of a village that is seven kilometre from Leh and nestled in a long valley through which a stream flows south-west to drain into the Indus.

Between Leh and Saboo is ‘bomb-ghar’, a valley that used to house an ammunition depot. When this military facility was removed, it became a garbage dump yard for Leh — a long eerie gully where free-ranging domestic dogs have established dominion over the wasteland, and where humans fear to venture on foot. A location suitable for shooting a scene on environmental dystopia.

In Ladakh, successful conservation strategies have been designed to balance the livelihood needs of people with the requisites of wildlife. Initiatives for reducing livestock depredation by ‘predator-proofing’ corrals and facilitating homestays promoting wildlife tourism are some of them.

Whenever there are occasional livestock kills, they become opportunities for photographers and naturalists to go flocking to sight the predator. In instances like this, the revenue generated locally by these opportunistic visitors exceeds the value of lost livestock.

On April 17, 2019, I was one such opportunistic visitor in Saboo. On one of the terraced plots in Saboo Phu, a snow leopard had killed a ‘dzomo’, a female hybrid between the yak and domestic cattle.

On the kill that was a day old and largely intact, nibbling away were a few magpies and a small dog from the village. Around the plot was a wall of neatly stacked stones. About a 100 metres from the kill, outside the stone fence, sitting at the base of a hill were five huge, grubby dogs.

They were waiting to approach the kill. Unkempt looks and old scars on their bodies indicated that they were hardy and street-smart. With those five dogs hanging around, the snow leopard was unlikely to come down to the kill.

Clearly, these dogs were not from Saboo. One of them had a large patch of bare skin exposed on the right flank, maybe an old scar from a fight for food or territory or an opportunity to mate.

Another dog that seemed more menacing was a little larger and had a limp in its right hind leg. They went higher into the gully, climbed over a spur and disappeared.

They had probably gone towards the ridgeline. They were probably heading back to where they had come from, to Leh’s garbage dump yard — the ‘bomb-ghar’, about 4 kilometres in that direction.

The Wildlife Protection Department team had captured the snow leopard at the cattle kill location, put a radio-collar and released him there in the morning hours of April 17.

Recovering from the effect of tranquiliser, he had unsteadily climbed the nearest spur, leading up to the ridge. In the hill somewhere among the rocks, he must have found a shaded spot to rest and recover.

Typically, snow leopards feed at the kill through the night, then go up into a nearby hill for the hot part of the day and then, a little before sundown, descend to feed on the kill again. I had waited some distance away for him to return to the kill.

By the time I reach the vantage point, the snow leopard had already started moving away from the carcass. He had crossed the field, leaped over a stone fence and taken to the hills; followed by barking dogs.

Once on the hill, he slowed down, walking easily. The dogs were getting closer, their bark, louder. Not really bothered, but harassed, he climbed into the hill and settled among the rust coloured rocks. He sat there looking very calm, ignoring the dogs that were now frantic.

With chin on forepaw, he looked straight ahead and besides him, about 5 metres on either side, there were the three dogs that I had earlier chased away into the mountains.

After a few minutes, the snow leopard started climbing the rock-streaked, gravelly hill again. The radio-collar appeared bulky but their weights are mandated to be less than five per cent of the animal’s body weight and are not a bother.

He stopped a few times, looked back and moved ahead with some lethargy, indifferent to the dogs behind him, which were getting bolder. At one point, they came as close as a swipe-distance away and the snow leopard whirled around, taking a mock swipe.

As the snow leopard continued to climb, the dogs got braver and succeeded in driving the big cat onto the ridge. A few hundred metres above the kill, the snow leopard looked back once, and then moved out of my sight.

The light was waning and the ricocheting echoes from dogs barking in the fading valley eventually became fainter. The snow leopard had gone far over the long ridge and high above the valley.

But the apparent indifference of the snow leopard towards the harassing dogs was intriguing. I would have imagined him to be capable of easily inflicting serious injury or even killing them. Why did he choose to walk away calmly?

Domestic dogs are not the natural prey of wild carnivores, as much as they are not natural predators of wild ungulates. Large wild carnivores avoid face-offs and do not go for a kill unless rewards are high enough to offset possible risks during an attack.

In a separate case, a snow leopard had killed a dog to feed on it. A neon-tinted video of an emaciated radio-collared snow leopard feeding on a dog it had killed had surfaced on social media on June 13, 2019.

By daybreak, the Wildlife Protection department team had rescued and taken him to the rehabilitation centre. It had a severe injury on one of its forelimbs. Unable to hunt in the wild it must have resorted to taking an easy prey.

Ladakh is spread over nearly 60,000 sq km, with over 20,000 sq km of protected areas that have 2,000 km of functionally fuzzy boundary. Here, wild animals are found around human habitations and villages inside sanctuaries.

However, because of the vastness of the region, scant resources, sparsely distributed wild animals and villages separated by great distances, it is easy for humans and wild animals to not step on each other’s toes.

This would have still been largely true if it was only the population of Ladakh, which is less than three lakh and the decadal growth in population that is comparable to the national average. But, the booming tourism industry that brings more than three lakh tourists annually into Ladakh also brings with it plenty of environmental woes.

The main impact of tourism that Ladakh is contending with is the tremendous increase in the amount of waste generated. Adding to this quantum of waste from cities and towns is the food waste generated on military camps in remote areas.

Waste can hurt our environment in ways more than one. With regard to the negative effect on wildlife, ‘man’s best friend’, the domestic dog has become a new vector of environmental hazards.

By scavenging for food on garbage dumps, they are concomitant to anthropogenic activities, and their populations have seen explosive growth. Subsidised by waste in human habitations, they range widely in packs into wildlife areas and harass and hunt wild animals and birds.

To eliminate this threat to wild animals from domestic dogs, there is no bypassing two urgent needs:

An unowned domestic dog, in the middle of Leh market, had been an easy prey even for the injured snow leopard. Yet, he and his ilk will kill domestic animals, only:

The injured snow leopard healed and was released back to where it was initially radio-collared — on the other side of the Indus at a distance of 20 km from Leh. The snow leopard radio-collared at Saboo revealed from preliminary telemetry data that it ranged over 40 sq km of territory in the mountains around Leh.

It is not important to dwell on the fate of a single wild individual, unless that individual’s fate tells a story that afflicts the whole of their population. These two snow leopards could not have revealed more before fading away into the mountains — of the presence of domestic dogs in wild landscapes and the latter’s adverse impact on wildlife.

Narendra Patil worked in Ladakh for two years until 2019, towards snow leopard conservation, first with a non-profit and then headed a UNDP biodiversity conservation project at landscape level