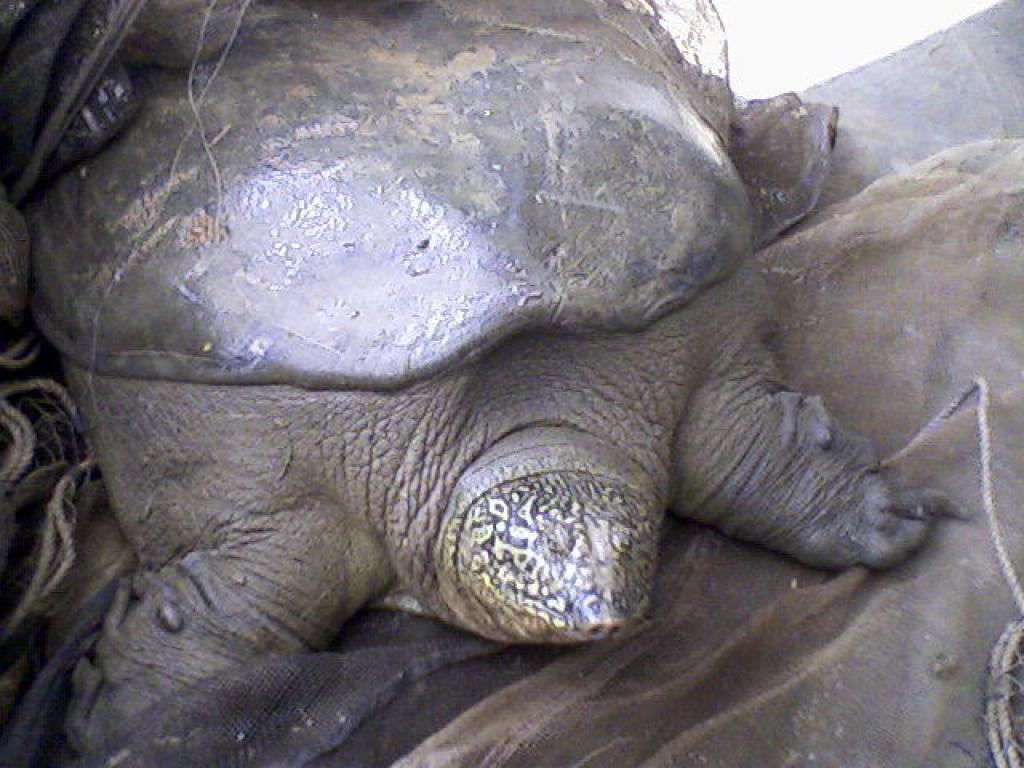 Like many turtle species, Swinhoe’s softshell turtle (Rafetus swinhoei) has for centuries held special cultural significance in Vietnam. For the people of the country, the Hoan Kiem turtle, as it is known locally, is a symbol of Vietnam’s independence and prosperity.

According to the legend passed from one generation to the next, this giant golden turtle emerged from the Hoan Kiem Lake to reclaim a magic sword used by the Le Loi King to defeat Chinese Ming forces in the 15th century. The lake was renamed Hoan Kiem Lake or Lake of the Returned Sword based on this legend.

But despite the Rafetus swinhoei being revered, it is also extremely threatened. For two decades it has been listed as ‘Critically Endangered’ on the Red List maintained by the International Union for Conservation of Nature. Since 2013, the Rafetus swinhoei has also been listed in Appendix II of the Convention on International Trade in Endangered Species of Wild Fauna and Flora.

When two of the last remaining Swinhoe’s softshell turtles died without producing any known offspring between 2016 and 2019, this species became the most endangered turtle in the world.

In response, conservationists and veterinary experts from Vietnam, along with global partners, made the recovery of this turtle one of their highest priorities. Swinhoe’s softshell turtles were also included in the five-year conservation plan of Hanoi People’s Committee in 2018 and added to the committee’s 2030 vision plan.

Then, in October 2020, a female turtle was captured in Vietnam and confirmed by veterinarians to be a female Rafetus swinhoei. With the leadership of the Hanoi Department of Agriculture and Rural Development, in collaboration with the Asian Turtle Program of Indo-Myanmar Conservation and our organisation, the Wildlife Conservation Society (WCS), this imperiled turtle species may now have a second chance at survival.

The confirmation of Swinhoe’s softshell turtle in Hanoi’s Dong Mo lake means there is now a female in addition to a male, who is at the Suzhou Zoo in China. Authorities believe there are at least one more of these turtles in Dong Mo lake and another in nearby Xuan Khanh lake. Conservationists hope to capture and determine the sex of the other turtles in the coming months.

Ultimately, conservationists aim to help at least one male and female to breed to ensure that this species can return from the brink of extinction. The race to save this flagship species in Hanoi highlights the importance of working in partnership to mobilise resources and address issues like water pollution, safer habitat and more sustainable resource management. It also helps to replicate that success to save other species.

Task forces have been established to provide both the daily monitoring of turtles and the capture and preparation of other Swinhoe’s softshell turtles for a captive breeding programme. Local fishermen have been engaged to monitor and capture the turtles and have played a significant role and made a key contribution to Rafetus swinhoei conservation work.

At the same time, scientists are working to better understand the ecological role of this species. Researchers like Jeffrey Lovich of the US Geological Survey have highlighted their importance to the seafloor biosystem, where they contribute by enriching soil nutrients and facilitating seed dispersion. The way in which river turtles — and specifically the Rafetus swinhoei — add value to their own ecosystems is an area that needs further study.

As WCS has worked to locate more Rafetus swinhoei individuals in the wild, we have come to better understand the ways in which habitat destruction has helped to push this turtle species to the edge of extinction: from water pollution to riverbed abrasion, to overexploitation for food and illegal trade.

A communication task force is now working with local communities to transition from harmful hook and electrical shock fishing methods to safer practices and to rethink the way in which trash and pesticides are disposed into the sewage system, which eventually empties into the Dong Mo lake, to help improve the quality of the lake water — especially during the low rain season. More work must be done to curb pollution from dump sites and golf courses into local waterways.

In Vietnam, with the leadership of the Hanoi People’s Committee, we are determined to take responsibility to give this cultural icon another chance. While overhunting and habitat destruction have contributed to its demise, our work confirms that the Hoan Kiem turtle and the centuries-old legend lives on.

With bad news and sadness from the novel coronavirus disease (COVID-19), we feel hope by giving this species another chance to survive and to pass the symbol of prosperity to future generations in Vietnam and around the globe.

This article was produced by Earth | Food | Life, a project of the Independent Media Institute