Why we must conserve the world’s seagrasses 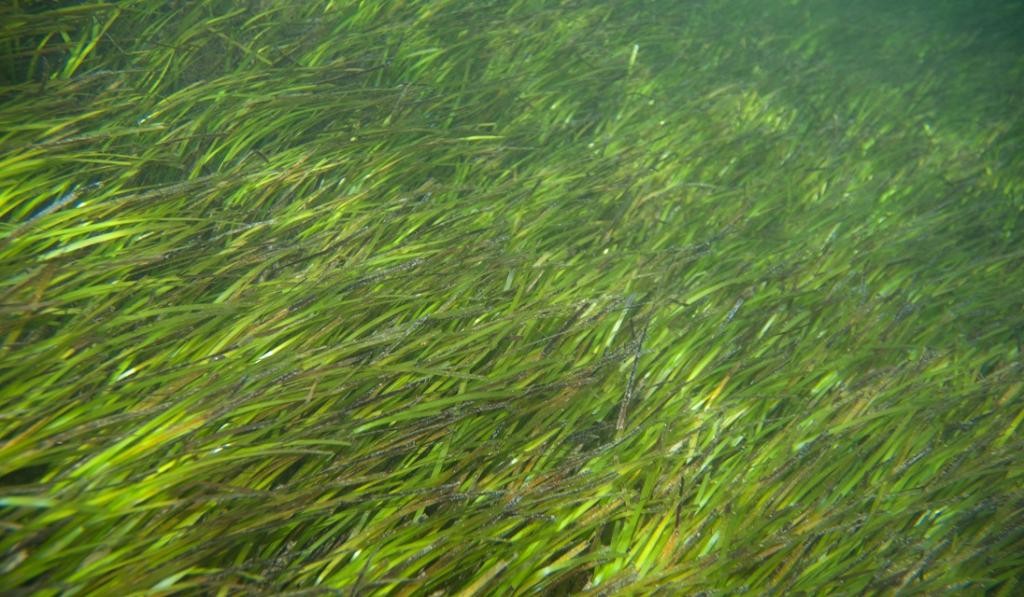 Seagrasses are flowering plants that grow submerged in shallow marine waters like bays and lagoons. With tiny flowers and strap-like or oval leaves, they require sunlight for photosynthesis.

Seagrasses occur all along the coastal areas of India. They are abundant in the Palk Strait and Gulf of Mannar in Tamil Nadu.

Though seagrasses inhabit all types of substratas (layers) from mud to rock, the lush green seagrass beds are found extensively in muddy and sandy substratas.

There are 21 islands in the Gulf of Mannar. Seagrasses abound in the waters around the islands of Kurusadi, Pumarichan, Pullivasal and Thalaiyari. All six genera and 11 species of seagrasses are found here.

Like terrestrial plants, seagrass also photosynthesise and manufacture their own food and release oxygen.

Seagrasses reproduce through both sexual and asexual methods. The pollen from the flower of the male plant is transferred to the ovary of the female flower through the sexual reproduction method.

This is known as submarine pollination. Most species undergo this process and complete their life cycle underwater.

Seagrasses can also reproduce asexually by branching off at their rhizomes (modified subterranean plant stem that sends out roots and shoots from its nodes). Because of this character, they can recover after being cut by grazers like dugongs or disturbed by storms.

Seagrasses are known for providing many ecosystem services. They are considered to be ‘Ecosystem Engineers’.

In the absence of seagrass communities, the sediments are stirred by wind and waves, decreasing water quality. This reduced water clarity affects marine animal behaviour besides decreasing the recreational quality of coastal zones. They filter nutrients released from land-based industries before they reach sensitive habitats like coral reefs.

Ocean bottoms without seagrasses are prone to intense wave action from currents and storms. The extensive vertical and horizontal root systems of seagrasses stabilise the sea bottom similar to land grasses that prevent soil erosion.

Seagrasses provide food as well as habitat for fishes, octopuses, shrimp, blue crabs, oysters, sponges, sea urchins, clams, etc. They are called ‘the lungs of the sea’ as they release oxygen into the water through photosynthesis.

Some endangered marine organisms like dugong, green turtle, etc, graze directly on seagrass leaves. Many other microorganisms take the nutrients indirectly from seagrasses.

When it is further decomposed, it releases nutrients like nitrogen and phosphorous. The dissolved nutrients in the water are absorbed by seagrasses and phytoplankton.

Juvenile fish and invertebrates conceal and take protection in the seagrass meadows from predators. The sea squirt and molluscs use seagrass leaves as they are ideal for attaching their larvae and eggs. Seagrass meadows provide ideal nursery sites for important commercial marine life like squids and cuttlefish in Tamil Nadu.

One acre of seagrass can sequester 740 pounds of carbon per annum — the same amount emitted by a car travelling around 6,212 kilometres. Seagrasses can capture carbon from the atmosphere up to 35 times faster than tropical rainforests.

Seagrass beds are facing decline all over the world at the rate of 2-5 per cent annually. Some 30,000 square kilometres of seagrass has been lost during recent decades at a global level.

Siltation, trawling, coastal engineering construction, pollution, etc, are considered to be significant causes for the deterioration of seagrasses. Sea Cow (Dugong) and Green Turtle that depend on seagrass for their food also face a severe threat.

The International Union for the Conservation of Nature should intervene immediately and study the status of the different seagrass species before they become extinct.

If seagrass habitats are lost, the marine organisms that depend on them for their survival may also face extinction, resulting in the loss of marine ecosystem productivity.

There is an urgent need to take earnest measures to conserve seagrasses and their habitats.