The massive sea cows are vanishing in India 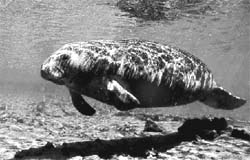 the legendary sea cows or dugongs, known locally as ' aavuli ' of the Indian seas are on the road to extinction. The marine mammal, which feeds its young ones from its breasts grows to about 2.1 m and weighs about 600 kgs. During the early part of the century, the dugongs were found in thousands in the Gulf of Mannar, Palk Bay, the Gulf of Kutch and Andaman islands in India. A recent aerial survey carried out by Leatherwood of Marine Park, Hong Kong, could not spot a single animal in the Rameshwaram area, though occassionally they are reported by the fishermen. They feed on sea grass ( Cymodocea serrulata and Halophyla ovata) . They are found as far away as on the East African coast in the West and up to Japan in the East. A good population of it exists off the coast of Australia.

Fossil history shows that they are related to elephants as indicated by their teeth structure and embryology. Being strictly vegetarians, they feed on the sea grass found abundantly along the shallow coast. Their mouth is modified to suit the feeding habit. They can browse at the bottom of the sea uprooting the rhizomes of the sea grass and are voracious feeders.

They are very passive and their massive size is the only form of defence. There is a belief that the meat of the dugong can cure piles and stomach problems.

They give birth to a single calf. Their heavy bones and haemoglobin-rich blood enables them to stay under water for long periods. The dugongs have to come up to the surface of the sea for breathing once in every 5-7 minutes. This is when they are the most vulnerable to attacks.

The dugongs were hunted with dynamites when they surfaced for breathing. Besides, they were killed in gillnets spread in their feeding grounds. Once they are caught in a gillnet they cannot escape as the flippers and caudal fin get entangled. In the early days, before the advent of the nylon nets, the gillnets were made of hemp or coir threads. Dugongs entangled in the nets could break the meshes of the nets and escape. But gillnets of today, made of nylon threads, prove fatal for dugongs. Dynamite fishing is quite common in the Rameshwaram area of Tamil Nadu and there are incidents of fatal accidents from the dynamite.

Another major reason for the depletion of the dugong population is the loss of habitat. The sea grass meadows of the Gulf of Mannar and the Palk Bay are disturbed by hundreds of trawlers targeting the prawn species Penaeus semisulatus. The trawl nets uproot the grass beds. The repeated cyclones also have had an impact on the dugong population. Many dugongs were washed ashore after 1964 cyclone in Palk Bay and Gulf of Mannar.

The dugongs are included in the schedule I of the Wildlife Protection Act, 1972. But after being caught in the sea they are cut into pieces in the boat itself and sold surreptiously to hoodwink the law enforcing authorities. Further, the arms of the law cannot reach the far flung coastal villages which are remote and inaccessible. The population of dugongs along the Indian coast has come far below the sustainable level. Marine mammal experts feel that a sustainable population should have at least 500 animals. A recent survey organised by the Zoological Survey of India could not spot even a single dugong in the Palk strait and Gulf of Mannar.

Captive breeding is not feasible in the case of dugongs due to their specialised breeding habits. Though two dugongs were kept in captivity for about 12 years in Regional Centre of Central Marine Fisheries Research Institute, Mandapam Camp, the dugongs did not breed. Nowhere in the world the dugongs have been bred successfully in captivity. Although, there are many aquariums in Indonesia, Singapore and Japan which are keeping dugongs in captivity. An alternative to conserving the dugongs may be to transport themfrom Australia to Palk Bay or Gulf of Mannar as the food habit of the dugongs of India and Australia are the same.

There is good populations of dugongs, numbering over 10,000, in Great Barrier Reef of Australia and the Australian government is taking great pains to protect them. A moderately good population is located near the Madagascar coast and in the Arabian coast. But the dugongs of the Indian coast are doomed in spite of the declaration of the Gulf of Mannar as a marine national park. Many fishermen are not even aware that they are living in the marine national park.

Zoologists fear that the marine mammal could be deleted from the Indian fauna list. A massive awareness programme involving the local communities, fishermen and the local bodies should be initiated to save the vanishing sea cows.