Winter visitor to a cold land

With one arm in a sling and my hands frozen, my numb fingers struggled with the binoculars. I was watching birds at Sela Pass in western Arunachal Pradesh, on the way to Tawang. I had taken the trip despite the fractured wrist. Situated at 4,200 metres above sea level, Tawang was bitterly cold in December. The birds obviously felt the cold as well and early in the morning there was little activity.

At Sela Pass we stopped at the local dhaba, searching for a hot cuppa to warm our frozen hands. Gulping down our hot beverage, we decided to take a stroll through the pass. Small water bodies, all frozen, dotted the pass. At one of the larger water holes, we noticed some water had still not frozen. Looking at the water body through our binoculars, we noticed a small bird swimming in the water. Could it be a duck, we wondered? Suddenly, the bird was gone.

It had dived into the water and all that remained on the surface were a few ripples. We waited with bated breath but nothing surfaced. A few minutes later, well away from the point where the bird had dived, it emerged. A grebe! Grebes are water birds that hunt for food by diving into the water. They are capable of staying under water for long periods, as they hunt for small aquatic creatures such as fish and crustaceans. What could a grebe be doing at 4,200 metres? 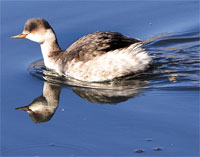 Stealthily, we made our way closer to the waterbody. Soon, we were close enough to identify the bird: a Blacknecked Grebe, Podiceps nigricollis. The bird’s scientific name Podiceps comes from two words “podicis” which means vent, and “pes” which means foot in Latin. In all grebes the foot is attached at the extreme end of the body. This structure allows the grebes to swim and dive expertly.

But grebes are reluctant fliers, preferring to dive into water when threatened rather than fly. In fact, this grebe is flightless for many months of the year and yet can fly thousands of kilometres during its migration. It was unusual to see the bird at this altitude. The migratory Black-necked Grebe is a winter visitor to India. I have seen it in large numbers in salt pans near the Gujarat coast.

However, mostly there are scattered sightings of individual birds from western and northern India. To see the bird at this altitude in Arunachal Pradesh was unusual and possibly a new record for the state. Common throughout the world, this grebe is found on every continent with the possible exception of Australia and Antarctica.

The bird gets its common name from its black neck which it has during the breeding season. As the grebe does not breed in India, its non-breeding plumage is duller and does not have the black neck.

I had not carried long lenses for bird photography. I watched with a growing sense of disappointment as my colleagues proceeded to photograph the grebe. The only lens I was carrying was 105 mm macro lens, suitable primarily for close up photography. Saddled with an unsuitable lens, I still decided to attempt a few photographs.

Gradually, I crept closer to the bird. The grebe kept diving into the water to feed and was unperturbed by my presence. My colleagues had gone ahead of me and I was left attempting bird photography with a handicap. After 30 minutes of a slow approach, I was finally close enough to take some pictures.

Each time I brought up the camera, the bird dived into the water. It was guesswork to figure out where the bird would surface. After several trials and errors, I finally managed to get some decent photographs. As luck would have it, the angle of the sunlight was such that I ended up with better photographs than my colleagues.

We crept away, leaving the grebe to its dives, intrigued as to why the grebe would prefer to feed in the cold lakes of Sela Pass when warmer (and more productive) habitat existed elsewhere. Another one of nature’s unexplained mysteries.