Women build where others destroy

Why do women who attempt changes in local land use patterns meet with so much hostility? 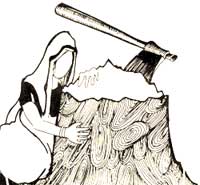 THAT rural Indian women are the worst victims of environmental degradation is well-known. But what happens when women assert themselves? This is the story of the four-year-long struggle of the women of Muvasa village in the Panchmahals district of Gujarat who made degraded common land arable. To my mind, it illustrates the tensions women face when they attempt to change land use patterns, and their own lives.

During the 1987-88 drought, some tribal women belonging to impoverished families who had little or no land, were engaged in daily wage work, planting fuel and fodder trees on local wasteland. The work had been organised by the Social Action for Rural and Tribal Inhabitants of India (SARTHI). The women had long been wanting to do something like this because it obviously meant that they wouldn't have to spend long hours searching for fuel and fodder. But they did not have any land for the purpose.

SARTHI's field staff, Champaben and Vikrambhai, suggested that the women form a group and cultivate a plantation on a patch of degraded common land in the village. Since the women showed tremendous enthusiasm, SARTHI offered to pay the costs for preparing the land.

The women evolved some ground rules for their group. They would do all the work entailed in preparing the land and planting on it themselves. The group would be collectively responsible for protecting the plantation and taking any decisions concerning it. It was also decided that the produce from this patch of land would be shared equally by all the members. Only women could become members of the group.

A total of 29 women, all from the poorest families in Muvasa, joined the group. The Muvasa panchayat gave them a "no objection" certificate to plant on four ha of common land. It was agreed that this permission would be renewed after 10 years, and the panchayat would not claim any share of the produce.

But the men in the village were suspicious. There were complaints that the women were wasting time on the meetings and neglecting their housework. There were rumours that SARTHI would abduct the women and steal their jewellery. Things came to such a pass that SARTHI had to call a separate meeting of the men and explain why the women's group had been formed.

Braving problems at home and in the village, the group continued to build on their work. By February 1989, they harvested their first grass crop through voluntary labour. All the grass was piled up in the plantation till the women decided how to distribute it amongst themselves. But three drunks from an adjoining village put paid to their hard work by tossing a lit cigarette stub onto the grass.

Initially despondent, the women then decided that the men shouldn't be allowed to get away with it. Knowing that the women had by now earned the respect of many in the village and enjoyed a fair share of popular support, the three guilty men agreed to pay Rs 1,400 as compensation for the damage they had caused. The victory boosted the morale of the group, and inspired other women's groups to launch similar initiatives.

But the problems didn't disappear. Throughout 1990, there were regular thefts with people from neighbouring villages letting their cattle into the patch at night for grazing. One of them was finally caught by the women and given a stern warning.

With the trees growing taller, and the group becoming more confident, it seemed that the worst was behind them. But on February 1, 1992, six families from an adjoining village hacked down about 4,000 trees from the plantation and carted them home. The women have registered a case with the police and asked their panchayat to support them in their battle for justice.

While negotiations between the women and the trespassers continue, the crisis has raised important questions. The police complaint has generated tension between the two villages. Although many in Muvasa are sympathetic, some people feel that the plantation is causing too many problems and that it is better if it were allowed to die. One of the trespassers is related to members of the group, and these women are being pressurised to leave the group or at least refrain from actively supporting action against the offenders. Individuals have even been threatened and abused by the families of the trespassers. At one stage, tension had mounted to the extent that there was fear of violence and bloodshed. The panchayats in which the two villages fall are also facing conflicting pressures from their respective constituencies.

And all this over some biomass generated on four ha of degraded land over four years by a women's group. Such is the acute scarcity of biomass in the area that the group's plantation stands out like an oasis in a desert.

A similar group was formed in the trespassers' village, but the plantation there could not withstand the repeated onslaughts on it. The option of rehabilitating larger areas of common land is also limited as there is hardly any common land available which has not been encroached upon.

So it seems that the women of Muvasa will have to learn to live with the constant tension over access to diminishing land resources in the areas. Their struggle will be all the more difficult as they also have to establish their right to control and manage common land resources.

Madhu Sarin is an urban planner-turned-social worker and a consultant to voluntary groups on the involvement of women in forestry and rural energy projects. She has also written numerous books and articles on women and environment. She will contribute regularly to this column.