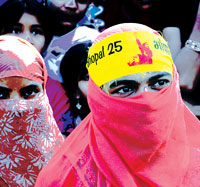 The Bhopal question has one more angle: why was there so much public and media outrage over this 25-year-old issue? Why did the national media focus on this story, which till now had been consigned to the backrooms where only noisy environmental activists live?

Many things, I believe, have contributed to this outpouring of anger. One, there is a post-Bhopal gas disaster generation in the country. These young people do not know what happened that night or the events of the years after. They are shocked to see the scale of human suffering and stilled by the sheer injustice. Two, as a nation, we now recognize environmental questions as important, indeed critical, to our health. In Bhopal we see that chemical disaster, which is around us—in the pesticides in our food, in the air we breathe and in the industry that pollutes with impunity. Three, and perhaps most importantly, we see in Bhopal an utter failure of the Indian state to protect its people. We see the complicity and failure of our collective systems, from the executive to the judiciary.

But what riles us, more than anything else, is double standards of the big and powerful. This is the same time when global media is flashing into Indian homes the scenes of another devastation—the oil spill off the coast of the US. This is the time when another top executive of another top company, BP, is being hauled over the coals to pay for damages to the environment and people. We also see the same US government, incensed by homeland pollution, is so insensitive to the tragedy in faraway places involving its own companies. The focus on how Warren Anderson, the former chief of Union Carbide, got away that day from Bhopal and was never tried for the knowledge he had of the accident in the making, has to be seen in this context. A globalized world is also about equality— of intent and action. Indians, I believe, will no more want pusillanimous action from our leaders against big corporates, however much they may want the investment and lifestyle these companies promise. This is why Bhopal’s sufferings have touched this country.

But the question that bothers me is: will our collective anger, reflected in the media, sustain till justice is done? Let us be clear, what we face are not quick or easy tasks. The government’s own report, prepared by the National Environmental Engineering Research Institute (NEERI), has confirmed the findings of CSE’s pollutionmonitoring laboratory—that the factory site is contaminated with high levels of toxins, from mercury to pesticides (see ‘Subterranean leak’, Down To Earth, October 1- 15, 2009). This is not a small victory. The Bhopal-based activists have been fighting, indeed screaming, about this contamination. But till date they have faced only denial and callous and criminal dismissal.

Now the clean-up begins. The Group of Ministers has accepted that the entire factory site—not just the stored 300-odd tonnes of waste—will have to be cleaned. It still does not know how deep the contamination goes and how much soil will have to be removed and then disposed of. NEERI says the only saving grace is that because of geological conditions contamination has not seeped into the city’s aquifers. But NEERI does confirm CSE’s finding that some three km away, borewells have the same toxins. So there is a need to drain these wells and treat the water. It’s no small task. This is poisoned land. Inside a thickly populated city.

The second challenge is of holding the company liable for contamination. Dow has issued statements saying it has nothing to do with the waste. It says the Union Carbide Corporation (UCC) had settled all claims—in the unfortunate and unjust settlement by the Supreme Court. It says it has no responsibility. And it has smart lawyers—in this case, spokespersons and leaders of the Congress and the BJP—who will find legal loopholes once again.

This when we know the following. One, the contamination at the factory has little to do with the accident. It is about criminal negligence of the company when it was operating the plant. It dumped and left its waste on the ground. Claims for this poisoning have not been settled. Two, during this period the US company Union Carbide held operating control of the plant and is liable for the contamination. Three, it knew of this contamination and did nothing about it. We know now that NEERI was commissioned by UCIL in 1994 to study the site. We know that NEERI had given the report to its client. We know this because Dow’s lawyer in his 2006 opinion admitted this: his client knew of this report and the contamination of soil and groundwater in 1996. But the company did nothing. Instead it handed over the land to the state government. Now it can say it cannot be held responsible. It does not even own the land. It is an old corporate legal tactic: confuse ownership to convolute the liability trail. Will it work this time?

Mahatma Gandhi’s Young India has given way to another young India. Will this young India allow travesty of justice? I hope not. I believe not. —Sunita Narain