Why aren’t women leaders graduating from panchayats to Parliament? 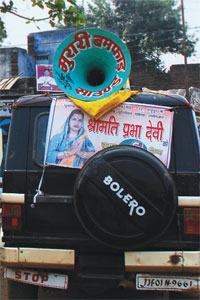 Panchayats are turning out to be the most preferred democratic institution for women. They are the first elected government in India to have reservation for women—33 per cent. Now there is a move to increase this to 50 per cent. In many states more women than men contest and win panchayat elections. The elected women panchayat members are usually younger than their male counterparts— a contrast to the trends in parliamentary elections.

In the ongoing 10-phase panchayat elections in Bihar, 300,000 women are battling for 10,000 reserved seats. Bihar became the first state to reserve 50 per cent seats for women in 2006. In the first two phases, more women have voted than men.

In Jharkhand, that held panchayat elections for the first time last year and reserved 50 per cent seats for women, women outshone men by bagging 58 per cent seats. A large chunk of elected women belongs to scheduled tribes and castes (72 per cent) and to below-poverty-line (BPL) families (40 per cent), while the current Lok Sabha has 245 crorepati members.

In 1995, when the first phase of panchayat elections was held, twofifths of women candidates belonged to BPL families and around three-fifths to landless or small and marginal farming families.

In Parliament no elected member is below the poverty line, nor is there a marginal or small farmer among those who have declared their occupation as farmer. Most studies in 1995 showed that about 70 per cent of women panchayat members were below the age of 45. In 2008, around 85 per cent of women were under 50 years of age. The average age of members of the current Lok Sabha is 53.03 years.

Reservation has definitely helped rural women. But the motivation for joining politics comes from increased public exposure through the self-help movement. By the time a girl turns 21, the eligible age to contest panchayat elections, she must have put in four to five years in community engagement through selfhelp groups (SHGs). One does not need a survey to conclude that SHG members form a substantial number of elected panchayat representatives.

Secondly, being part of an SHG means more direct participation in village development, like implementation of midday meals for schools, health centres and the employment guarantee programme. This fetches women public credibility; men do not have access to such an institution as SHG programmes have strong provisions for women participation.

This is what seeds women’s political aspiration; reservation just provides the right opportunity.

Does the rush for panchayats indicate political empowerment of women over a period of time? Does the consistent increase in their number indicate they have been effective in delivering development? Here come the stains on the silver lining. Only a few members of panchayat have graduated to Parliament and legislative assemblies. Twenty-five years is a long time for testing political empowerment under the panchayati system. Around 84 per cent of the elected women panchayat leaders do not re-contest after the first term. Numerous studies with limited samples have concluded women leaders do not perform better than men, though not worse; and the public feels the same.

So why do women not carry forward their political aspirations? This is where the reservation policy has been hijacked by social biases towards women and the faulty mechanism of reservation. In panchayats reservation for women is by rotation. A panchayat that reserves a seat for women once will not get the same privilege in the next elections. This means a woman gets five years to build on but loses the advantage later on. Here the biases and odds work against a woman to perform. Women leaders, particularly from lower castes and poor families, are more prone to be dislodged by noconfidence motions, often engineered by men. Secondly, lack of knowledge of roles and responsibilities hampers both man and woman representatives. But men can recontest. There is an attempt to increase the reservation to two tenures.

As we debate 33 per cent reservation for women in Parliament and assemblies, lessons from panchayats are worth learning.