Lavasa continues to bypass norms. But the environment ministry may give clearance to the the maiden planned hill city in India, Sakshi C Dasgupta finds out

India’s maiden planned hill city that made news for bending rules and undertaking unauthorised construction may get the Centre’s nod, after all. The buzz is the Union ministry of environment and forests (MoEF) may give conditional clearance to Lavasa, which is being developed in the Western Ghats, 65 km from Pune.

MoEF issued show-cause notice to the project for flouting environmental norms under the Environment Protection Act of 1986 on January 17. It also halted construction at the site till further notice. The project’s development has been divided into two phases— 2,000 hectares (Phase I) and 3,000 hectares (Phase II).

After receiving the notice, private developer Lavasa Corporation Limited (LCL) sought post-facto environmental clearance for Phase I on the grounds of investing Rs 3,000 crore in the project and that it has provided benefits like jobs and better road connectivity to people living near the site. A post-facto clearance, said environmental lawyer Ritwick Dutta, is when a project is granted MoEF’s approval after construction has started.

“It is an administrative action and has no legal backing. Simply stated, it is legalising illegality,” he said. The talk of a post-facto clearance emerged because of a point in the notice: “The MoEF is prepared to consider the project on merits with imposition of various terms and conditions, including penalty, environment restoration funds and comprehensive environment impact assessment (EIA) and management plan.”

In its defence, LCL said, “work at the site began after we obtained environmental clearance from Maharashtra’s environment department in 2004 under Hill Station Development Regulation of 1996”. Suniti SR of the activists’ coalition National Alliance of People’s Movement, which is campaigning against the project, said, “Since then, Lavasa has violated state clearances, and indulged in hill cutting and construction in no-development zones.” These accusations were confirmed at the meeting of the MoEF’s expert appraisal committee held on February 14-15, 2010.

In 2002, state-owned Maharashtra Krishna Valley Development Corporation leased out 141 hectares (ha) to LCL for public purposes like construction of check dams. “LCL used that area for building hotels, residences and malls,” noted the minutes of the meeting.

The Pune collector allowed LCL to construct on a plot of one ha in 2007, and 12 ha in 2008; both in Phase I. The building permission was for ground plus one floor. “But Lavasa took liberties and went on to construct up to fourstoreyed buildings,” said Suniti. In addition, “they followed a uniform floor space index (FSI) for all buildings, even for those in sensitive areas like hill slopes. All this has been possible because of the Maharashtra government’s support over the years”.

To suit LCL, the state amended the Maharashtra Regional and Town Planning (MRTP) Act of 1966, reducing no construction-zone near a water body from 100 metres to 50 metres. “The company defied this too. It reclaimed parts of land from water and constructed buildings less than 5 metres from water bodies,” she said. LCL officials refused to comment saying the matter is sub-judice.

Till date, LCL has completed construction on about 700 ha.

After a long-drawn movement against Lavasa by many activists, MoEF tried to make up for the lost ground. In its notice, MoEF categorically dismissed the nod given to LCL by Maharashtra, saying a state environment department has no delegated powers to give a clearance.

Only the state environment impact assessment authority (SEIAA) for Maharashtra, set up in 2008, could give clearance, the MoEF said. On January 24, Lavasa filed a petition in the Bombay High Court challenging MoEF’s order to stop work (see ‘Bombay high court gives six weeks’ time to Lavasa’, Down To Earth, February 16-28, 2011). The court did not overturn MoEF order and directed the ministry’s expert appraisal committee to visit the project site. The inspection exposed LCL’s misconduct.

A hospital in the planned hill city had no effluent-treatment facility for its liquid waste, violating conditions of the Maharashtra Pollution Control Board, the committee report stated. Roads and buildings at the site were constructed on steep gradient, increasing risk of landslides.

Impacts of construction activities alongside Warasgaon Lake, which flows through Lavasa, and its downstream flow to Pune were not properly assessed by LCL in its reports. “Such activities would affect quality of water and its supply to Pune and agricultural fields downstream,” Suniti said. The report also stated the entire project stands on an area originally earmarked for afforestation under Pune regional plan 2001.

LCL has published three reports, two EIA reports in 2004 and 2011, and a post project monitoring report in 2008. They were prepared by government-funded National Environmental Engineering Research Institute (NEERI) in Nagpur. 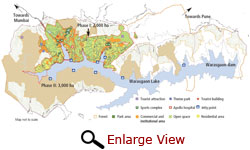 While the 2004 and 2008 reports showed presence of heavy metals, like cadmium and nickel, in groundwater, the 2011 report noted it as nondetectable, showed the minutes of the expert appraisal committee’s meeting. According to the 2003 and 2008 amendments of Hazardous Wastes Rules, presence of heavy metals in soil makes it unsuitable for construction. The 2008 report showed high lead concentration in surface water—0.2 milligramme per litre, five times higher than the ISI drinking water standards.

Further, Lavasa’s environment management plan ignored key recommendations of the 2004 EIA report that asked for mapping of slopes, their classification and vulnerability to soil erosion.

The controversy has brought under scanner the effectiveness of EIA, the most critical tool for regulating developmental process, pointed out Dutta. “The main reason LCL got away despite violating various laws is the weak EIA process in India,” he said. Simplified EIA rules for construction projects have added to the problem. According to the EIA notification 1994, all projects above 1,000 metres in altitude and requiring investment of more than Rs 5 crore need to apply for an environmental clearance.

“Lavasa did not apply for the clearance because its development was between 600-900 metres, and it was approved by the state,” said Arun Bodupali, senior vice-president, legal, LCL. But the investment was above Rs 5 crore, he admitted.

Even the EIA notification of 2006 has many loopholes, Dutta pointed out. It sets 20,000 sq m as the lower limit for obtaining an environmental clearance. In order to bypass this requirement, several proponents, like LCL, develop their project in smaller phases. Moreover, there is no provision for public consultation in the process of giving an environmental clearance for buildings and townships, Suniti said. “This was a major reason irregularities and violations by both Lavasa and the state government went almost unnoticed.”

Dutta added that the authorities’ focus should shift from area to ecology. “A project spread over less than 20,000 sq m can be potentially more damaging than a project bigger than this depending on the ecological sensitivity of the location. Like in the case of Lavasa, which is near Western Ghats,” Dutta said.

If given the post-facto clearance, Lavasa will set precedence of legitimising projects that have no prior or proper EIA. “It is not a new phenomenon,” said Kanchi Kohli of Kalpavriksh, an environmental action group. “It is just that it has become more open now.”

A case in point is the Mundra port and SEZ project in Gujarat that was granted post-facto clearance in 2009.

With inputs from Arun Bhandari