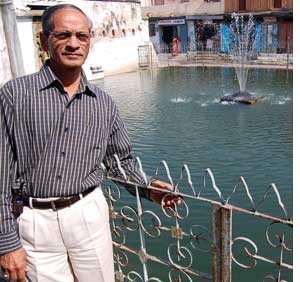 People living in and around Aurangabad were getting round the clock water supply through underground pipelines at a time when most cities in medieval India relied directly on wells, ponds and rivers. These conduits dating back to the 17th and 18th centuries transported water over long distances through gravitational pull much like the aqueducts of ancient Rome that supplied water to cities, their public baths and fountains.

The Archaeological Survey of India (asi) is all set to notify one such aqueduct in Aurangabad in Maharashtra as protected heritage. The aqueduct is 300 years old and was built by a rich moneylender, Bhagwanrao Thatte Naik, a Konkan migrant who settled in Begumpura area of the city sometime in the 18th century.

Naik’s descendant, Anant Vinayak Thatte, said his ancestor commissioned the aqueduct when there was water scarcity in the area.

Naik was looking for an alternative source of water when he learnt about the underground nehers (canals) of Aurangabad; the earliest one—Neher-e-Ambari—was built by Malik Ambar, the founder of the city (see box). Naik decided to build one such neher for his family. He commissioned local artisans.

The aqueduct opened into a large houd  (tank or cistern) in front of Naik’s home and provided water round the clock. The entire neighbourhood was allowed to draw water from the cistern.

The water is enough to meet the needs of 10,000 people. A smaller tank connected to the main one is for cattle to drink from.

The water supply system is unique. The Thatte houd is designed in the Persian style, said Brahmanand Deshpande, a historian in Aurangabad. He said the first aqueduct, commissioned by Malik Ambar who was prime minister to Nizam Shah, the then ruler of Ahmadnagar, was made by Italian engineers. It tapped water from the natural streams in the mountains and transferred it to the city. Aurangabag was fed by four such nehers; the Thatte neher was one of them.

The Thatte neher draws water from the river Harsool 12 km from the city near Islampurwadi village situated on higher ground. The water is channelized through a ceramic pipeline, three metre below ground. The pipe is protected with stone and brick masonry work. There are two additional pipelines installed as backup in case the main pipe gets choked.

Pressure of water passing though the pipeline is maintained through mambas or manholes. The water pipeline opens into the mamba. From there, a second pipe fitted at a lower level in the mamba carries the water further and at greater speed. The gradient ensures that water flows smoothly through the entire pipeline at a good speed without damaging the walls of the pipe. It also prevents water from stagnating, thus ensuring fresh drinking water at all times. The Thatte neher has six mambas that also act as access to the pipeline for its repair and maintenance.

he pipe transports water from Islampurwadi to Begampura without using pumps or electricity. The system operates on gravity. In places where the land is depressed, the siphon principle (water poured into a U shaped tube will rise to the same level on the other side) is used; the airtight pipe descends to the bottom and climbs the other side to almost the same level from where water is relayed further. The Thatte water supply system has been in continuous operation from the time the Peshwas ruled over Maharashtra. "I have never seen the Thatte houd  dry. Fish abound in the tank and there is a fountain in the middle," said Anant Vinayak Thatte. The cistern (measuring 12.8 metre on each side and three metre deep) is cleaned regularly. At the time of cleaning, the fish are let into the smaller tank, said Thatte. A pipe from the houd supplies water to the Thatte home. People from all castes and religions draw water from the tank free of cost, Thatte added.

He said his father and uncle decided to hand over the houd to the asi in 1971. The asi has been maintaining the water supply line since then but it was only on October 16, 2009 that it declared its intention to notify the houd and the neher as protected heritage. Notices have been issued inviting the public to voice their objections, if any. 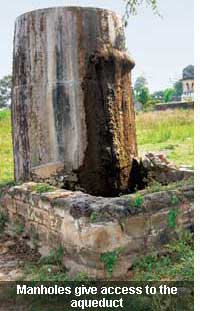 ASI rules are a problem

The asi is now in the process of acquiring the Thatte water tank and 10 metre land on either side of the neher. The residents are worried that they may lose their homes during the acquisition. As many as 14 property owners who have built houses close to the aqueduct have been issued notices. Many residents are opposing asi’s proposal to acquire land. In a meeting with officials in December, residents demanded that asi should exempt them from the 100-metre rule that bans construction activity within a 100-metre radius of a protected site.

The circle superintendent archaeologist, V N Prabhakaran, said he has received written objections and these have been forwarded to the asi headquarters in Delhi for consideration. He clarified that houses would not be demolished. “We will acquire only crucial areas. Since the neher is below the ground, it is not necessary to acquire all the properties along the canal,” Prabhakaran said.

The Thatte family is proud that their ancestor’s legacy is finally getting due recognition. Thatte said his family is happy to hand over the houd to asi but has one condition—people should not be charged money for the water and it should be accessible to them. Thatte also said that people should not be harassed. “The pipeline is below ground; there is no need to acquire land,” Thatte said.