Why set up thermal plants when the region is power surplus? 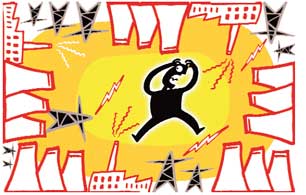 Maharashtra’s target is to generate 33,000 MW from 47 new thermal power plants. This is a measure for its power-starved western part; some of it would go to the Nor-thern Grid. Vidarbha, in eastern Maha-rashtra, is power surplus; the region produces 67 per cent of the total power in the state. A chunk of this is already supplied to western Maharashtra. Why then is the state keen on 47 more power plants? Most of them have got clearances from the pollution control board.

Odds against the power plants are several.


Take, for example, location. “Setting up power plants in Vidarbha works out cheaper because it is closer to Orissa, the source of the coal, than western Maharashtra,” said Vijay Singh, executive director, operations and management, Mahagenco, the state’s power generation company. It makes sense to set up plants in the coastal areas of western Maharashtra only if coal is imported, he added.

The fact is coal is imported, mostly from Indonesia, for the existing plants.

Whether coal is imported, at least 7-8 per cent of the power generated would be lost in transmission, and distribution losses would be about 25 per cent, said a November 2008 report of the Vidarbha Statutory Development Board. The state government constituted this board 15 years ago to bring the Vidarbha region on par with other developed regions of the state. The state electricity distribution company also claimed the current loss for transmitting power to western Maharashtra was about 4 per cent. If more power were to be transmitted from the eastern region, the loss could go up to 10 per cent, the company said.

Singh maintained that transmission losses would be about 1 per cent of the power generated.

Besides, laying the transmission network would also need land—around 60,000 ha. “These transmission lines render land under them barren and pose hazard to those living close by,” said Madhukar Kimmatkar, chairperson of the statutory board. None of the environmental impact assessment (EIA) reports of the projects considered this.

There is no log of the total land the power plants would need. In Chandrapur, the state government has acquired more than 800 ha of forestland for the power plants. In Nagpur, Mahagenco’s Koradi Thermal power project is expanding illegally. It has cleared more than 400 ha of compensatory green belt it created in 1978.

Then there is fly ash disposal.

The proposed plants would consume about 600,000 tonnes of coal, of which about 30-40 per cent would be converted to ash. Finding land to dispose fly ash is a logistical problem that EIAs, central and state appraisal committees have not addressed, said Sudhir Paliwal, chairperson of the science and technology cell of the Vidarbha Industries Association. “Incidences of ash leaking into rivers in the monsoons is common,” he added.

Mahagenco and state pollution control board officials insisted improved filtration technologies and better quality coal would bring down ash generation. But sources in power plants said no technology could prevent leakage during monsoons and that they used middle or low quality coal regularly, because the best was not always available.

Corruption does not help mitigate pollution either. In November 2009, the Koradi plant came to losing its bank deposit after poor quality filtration bags at one of the units burst, spreading fly ash over several kms, destroying crops on several hundred hectares. “All crimes are hushed up with money. This will happen in the future as well,” said Kimmatkar.

It is also not clear whether Vidarbha will get power from these plants. Officials have not responded to the statutory board’s demand that 10 per cent of the power generated should be reserved for the region. “With plants coming up within a 15 km radius of Nagpur, there will only be pollution for us; cities such as Pune can have the high-growth industries,” said Paliwal.