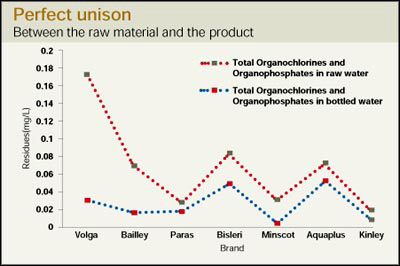 Why are there pesticide residues in bottled water? This isn't an isolated query. It condenses 3-4 lines of questioning:

• What kind of water do companies use as raw material?

• Companies are supposed to 'treat' the raw water, clean it up. If so, then what kind of clean-up is this, in which pesticide residues are found in the 'finished product'?

• Companies are supposed to adhere to strict quality specifications. They can sell their product only if it is certified.If so, then what kind of quality standards exist, that allow pesticide residues in bottled water? What kind of regulation certifies a cocktail of chemicals as saleable to the public? To be sold as water for health?

• Why are people in the middle of a condition that can only be called death by ignorance?


Once the results were in, the pml decided to check the quality of the water being used by the manufacturers as their raw material. This would help the pml understand what the quality of the raw water was and how different it was from the quality of the final bottled product. pml resource persons went to plants - located in and around Delhi - to collect water from within the plant premises. They were not allowed to inspect the Aquaplus, Bailley, Hello and Kinley plants.

There is no regulation that the bottled water industry must be located in 'clean' zones. Currently, manufacturing plants are located in the dirtiest industrial estates, or rear up in the midst of agricultural fields. For instance Volga, manufactured by Sai Durga Aqua Minerals, was located in Udyog Kunj Dasna Industrial area of Ghaziabad, bang in the middle of dirty industries and pesticide-drenched fields.

Most companies use borewells to pump out water from the ground (even plant managers who didn't let the pml resource persons in were forthcoming with this information). The borewell depths vary: 24-27 metres(m) for the Bisleri plant at Karampura, New Delhi; for Aquaplus, 61 m. The Minscot plant at Sector 18, Gurgaon bores a little deeper than Aqualpus: 70 m. Even deeper are the borewells of the Paras plant in Okhla Phase I, New Delhi and the Prime plant in Noida (76 m), while the Bailley plant in Ghaziabad plumbs water from 152 m below the ground. The plants also draw exorbitant amounts of groundwater: 10,000 to 30,000 litres per hour.

Some raw water samples collected from the plants revealed the presence of organochlorines such as endosulphan and dieldrin, and organophosphorous pesticides such as dimethoate and methyl parathion. Interestingly, all the source water samples threw up lindane, ddt and malathion and chlorpyrifos. In other words, the source water poison profile matched the bottled water poison profile.

The correlation is truly amazing (see graph: Perfect unison). It clearly shows the source of the pesticide residues is the polluted groundwater used to manufacture the bottled water.


The graph also clearly shows that the pesticide quantities in the bottled water, the 'finished product', are less than in the raw water. But they are still there! How?

All bottled water plants work towards a single goal: purify the raw water. Different companies use a range of purification methods. To remove microorganisms, two techniques are common: chemical disinfection and uv light (irradiation). Disinfectants such as chlorine (most common), chloramines, ozone and chlorine dioxide bump off pathogens in raw water. uv light irradiated into the water is effective against various kinds of bacteria and virus.

These plants use what is called membrane technology. Essentially, this involves filtering the water by using membranes with ultra-small pores. Microfiltration removes most of the fine suspended solids and almost all bacteria and protozoa. Ultrafiltration can block even viruses. While nanofiltration can remove insecticides and herbicides, it is costly and rarely used. Reverse osmosis membranes are even more effective. Yet another process companies use is activated charcoal adsorption; it is effective in removing organic pesticides, but not heavy metals.

According to the investigations done by the pml, it was found that plants manufacturing Minscot, Volga, Bailley, Prime and Aquaplus combine chemical and filtration techniques. The Bisleri and Paras plants emphasise only the latter. To remove pesticides, plants use the reverse osmosis and granular activated charcoal methods.

Surprisingly, these methods are the recommended technologies to rid raw water of pesticides. Why then did the pml find pesticide residues? There can be only two answers. Either the manufacturers do not use the treatment process effecti-vely, or only a part of the raw water is treated. Possibly, the entire raw water is not subjected to reverse osmosis, or only a part of it is and then mixed with pretreated water. It seems logical. There are standards for mineral content in water but if all the water is passed through reverse osmosis, then the minerals would also get removed. Therefore, to meet the mineral content specified by the Bureau of Indian Standards (bis) for packaged drinking water, it is possible that a bypass stream of filtered raw water is mixed in the end of the process. In one company visited by pml, the manufacturer treated the entire water through all processes, including reverse osmosis and then remineralised by adding metered quantities of minerals at the end. Obviously, the samples of this comp--any fared much better in terms of pesticide residues.

In any case, it is obvious that manufacturers are sitting back and letting the public bankroll them. It is equally obvious that the making of bottled water is a badly regulated process.


Whether it is packaged drinking water, or packaged natural mineral water, the bottled water a consumer picks up to drink is supposed to be a quality product. All quality products have specifications; in other words, norms or standards that have to be met and that ensure the consumer's money is well spent.

So far as the bottled water industry is concerned, there are a lot of checks in place. Any manufacturer who wishes to produce bottled water has to pass through a licensing procedure. His/her infrastructure facilities are assessed. There must be in-house testing laboratories to conduct on-site tests: daily bacteriological analysis, the ability to check the physical and chemical properties of the water being processed for bottling, or any factor that could compromise the nature of the product (total dissolved solids, ph, turbidity, conductivity or colour). Licenses are granted only if the infrastructure is satisfactory. Surprise inspections monitor performance; samples drawn from both factory and market are tested for quality control.

The bis operates a product certification scheme that enables manufacturers to use the Standard Mark (popularly called the isi mark) under the bis Act, 1986. Initially, the scheme was voluntary in nature, aimed at providing third party assurance to customers. Then on September 29, 2000 the Union ministry of health and family welfare - reacting belatedly to the boom in the packaged water segment of the beverages market - issued a notification (no 759 (e)) amending the Prevention of Food Adulteration Rules, 1954 (pfa). Effective from March 29, 2001 - even more belated - the bis certification mark became mandatory for packaged drinking water and packaged natural mineral water. There now exist separate standards for both: respectively, is 14543:1998 and is 13428:1998. These lay down the parameters to be tested for and adhered to, and ensure quality.

The manufacturer is required by the bis norms for packaged natural mineral water (is13428) and packaged drinking water (is14543) to meet the required standards for physical, chemical and toxic as well as radioactive residues.

In both the standards, the parameter for pesticide residues is an ambiguous phrase that says that "pesticide residues as covered under the relevant rule of the Prevention of Food Adulteration Act, 1954 shall be 'below detectable limits' when tested in accordance with relevant methods." The 18th edition of the pfa, published in 2002, also says that pesticides should be "below detectable limits".

Here is the catch. The question is: what is the equipment specified to test for the pesticide residues? If the method used is not very sensitive it will not find pesticides in the water. This is precisely what great Indian regulation does. It asks for tests to be conducted using a gc with packed column, rather than a gc with capillary column, the latter more sensitive and easily able to detect residues.

It is for this reason that the pml test did not use the bis standards as the norm. It deliberately preferred to use European norms. Directive 80/778/eec lays down quantified norms, maximum admissible concentration for pesticides "per substance" and "sum of compounds", or for individual as well as total pesticides. This way, a test can produce definite results. The pml also used the usepa method to carry out the tests. Why? Because it was not interested in finding pesticides "below detectable limits" according to "relevant methods". The pml gave itself a simpler task: were there, or weren't there, pesticide residues in bottled water? If there, then how much? It wanted, one way or the other, a definite result.